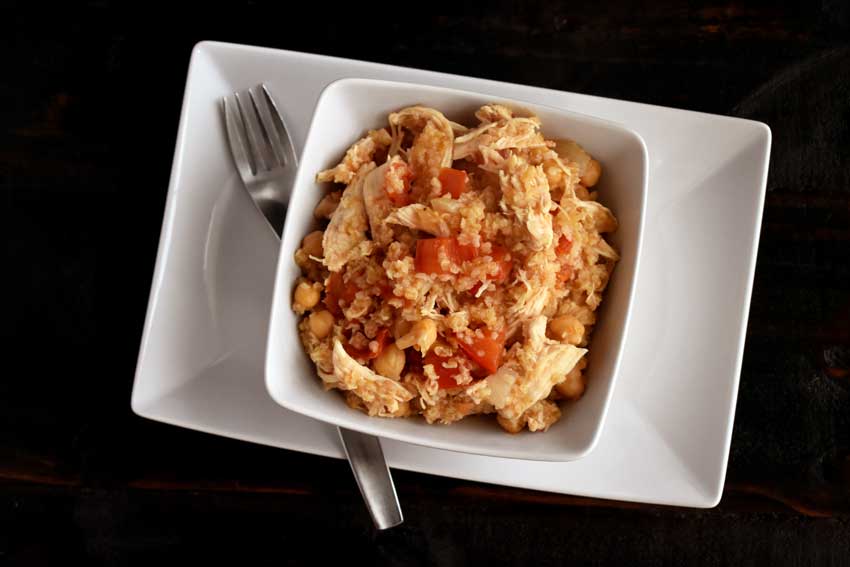 I’m pretty sure the only way I have ever had bulgur wheat is in tabbouleh. Not that I’m complaining, but it’s always nice to try new things. That’s why I decided to try this bulgur chicken recipe this week. Lebanese Bulgur with Chicken, Tomatoes, and Chickpeas sounds easy, healthy, and filling, all things I love to find in a recipe. Let’s give it a try!

This One Pot Lebanese Bulgur with Chicken, Tomatoes and Chickpeas is the ultimate healthy dish. At only 185 calories and 15 grams of protein per serving, you won’t feel guilty for eating two helpings!

Recipe Author: Hanady Awada at Recipe Nomad
Get the recipe

The list of ingredients for this bulgur chicken dish was fairly short, and everything was easy to find. Well, pretty easy. I did have to hunt for the bulgur, but I found it eventually.

As you can see in the picture below, I chose to use chicken breasts instead of drumsticks. This was because my husband prefers them and I thought shredding them would be easier than drumsticks. I’m sure boneless, skinless chicken thighs would work too.

Making this bulgur chicken dish wasn’t difficult, but it did take a little over an hour (1 hour 8 minutes). That’s because I followed the steps exactly and used one pot to make everything. The author does mention using two pots in her blog post to save time, and I’ll give that a try next time. It should cut the time down by 20 minutes.

I used a 4 1/2 -quart pot to make this dish, and it was just big enough to hold all the ingredients. It was also small enough that the chicken breasts were covered by all the water when I boiled them, but just barely. Next time I think a slightly smaller pot would work better for boiling the chicken. A slightly larger pot would also work for the caramelizing the onions and mixing everything together in the final step (steps 3-5).

Everything went very smoothly, but I wasn’t sure if the stock was supposed to boil away completely after the final 25 minutes of cooking. There was some liquid left in the pot, but the bulgur had absorbed a lot. I spooned the first couple of servings off the top to avoid that extra liquid. The bulgur chicken mixture was moist but not soggy, and the leftovers absorbed the remaining liquid by the next day.

Load more
Lebanese Bulgur with Chicken, Tomatoes and ChickpeasLebanese Bulgur with Chicken, Tomatoes, and Chickpeas was a well-rounded, healthy meal my husband and I both enjoyed. This dish had a hint of cinnamon flavor that was surprisingly good with chicken. The chicken, chickpeas, and bulgur were the next most prominent tastes, and I hardly noticed the vegetables. Overall, this bulgur chicken dish was healthy, filling, and worthy of an extra helping.
Hungry PinnerPin, Cook, Eat, Review