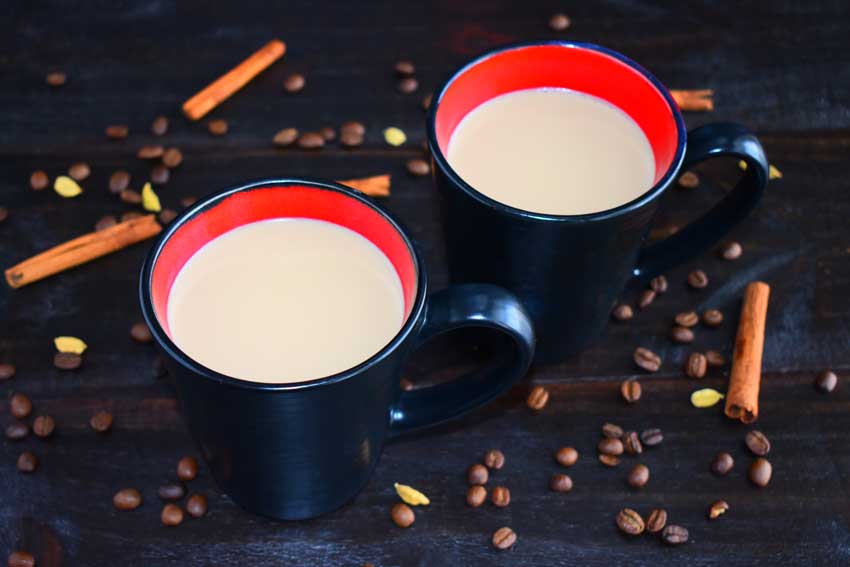 I’ve tried iced coffee with cardamom, now it’s time to try it hot as Pakistani Coffee with Cinnamon & Cardamom. I can’t wait! This recipe sounds like it will become my perfect coffee recipe. It’s spiced, creamy, and sweet, which is just the way I like my coffee. Now to set my alarm for an early wake up so I can properly test this recipe’s tasty caffeine powers!

Pakistanis prepare this fragrant coffee in large pots, constantly stirring and pouring from up high to create a frothy mixture. It’s a sociable activity – one that can be found throughout the local shops – and one that clicks through the rhythms of the day.

This recipe’s list of ingredients was short and full of things I had in my pantry. All I needed to buy was a quart of milk. I decided to go with regular, full-fat milk since coffee has become a rare treat for me. And dairy milk, for that matter. Sometimes I need to splurge!

This Pakistani coffee recipe was very easy to make, and it took exactly 20 minutes as specified. I love it when that happens!

I made sure to use a nonstick saucepan and stir often because the milk had to be heated with the coffee. I still had some milk residue that stuck to the pan, but it washed away easily because of the nonstick coating.

The amount of sugar wasn’t specified, so I played it by ear. I like my coffee very sweet, and the recipe said it could serve up to 6 people. I added 6 tablespoons of sugar to the pan, and it turned out to be the perfect amount for me.

Ladling the mixture to aerate the coffee was a new technique for me. Making coffee is normally a hands-off type of thing for me as I just add water and wait for it to steep. However, I found that ladling the coffee was oddly soothing, so I went well over the 20 times specified in the recipe.

The final step was straining the coffee and did this twice to make sure all the coffee grounds were removed. The first time I used a regular mesh strainer over a small mixing bowl. That removed the large spices and most of the coffee grounds.

Next, I waited a minute or two for the remaining coffee grounds to settle to the bottom of the bowl, then I slowly poured most of the coffee back into the pan until I had about half a cup remaining. Then I added a disposable coffee filter to my mesh strainer to filter out the remaining fine coffee grounds. It worked a treat! No coffee filters? I’m sure lining a strainer with a piece of cheesecloth or even a paper towel would work too.

Load more
The flavor of this coffee is sublime! The cardamom and cinnamon ad a noticeable flavor that’s not overpowering. The milk made the mixture nice and creamy without feeling too heavy. I added lots of sugar for a very sweet flavor, but that could easily be adjusted to your preference. This recipe is a little more work than using a coffee maker, but I found it to be very much worth the effort. In fact, it will be my go-to recipe for hot coffee from now on.Pakistani Coffee with Cinnamon & Cardamom
Hungry PinnerPin, Cook, Eat, Review