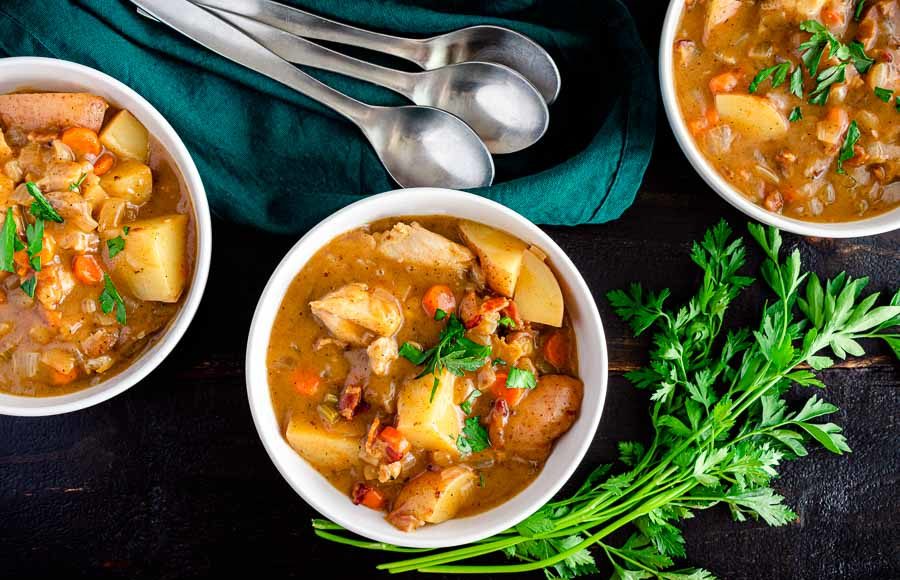 This White Wine Chicken Stew immediately called to me since I’m a big fan of one-pan meals. Plus there’s something so perfect about cooking chicken with white wine. Add fresh, colorful produce, and you have a meal that looks as good as it tastes. This recipe has all of that, and it just sounds so damn good! It’s one of those recipes I absolutely need to try.

This post was originally published on May 30, 2017. The text and photos were updated on July 29, 2021. The review and rating have not been changed.

WHITE WINE CHICKEN STEW has all of the flavor and none of the fuss! Such a delicious comfort food…the perfect soup for a cold Winter night! The flavors in this chicken stew are INCREDIBLE!

Recipe Author: Becky at The Cookie Rookie
Get the recipe

There are numerous ingredients, but none are difficult to find or especially expensive. Out of the 18 listed, I had 10 items on hand. I really just had to buy the chicken and produce.

My husband and I aren’t big wine drinkers, so using an entire bottle for 1 meal is tough. Then there’s the guilty feeling from wasting it. My solution? Boxed wine. Yup, I admit it. I keep boxes of white and red in the pantry just for cooking. No waste, no guilt, and I never have to make a special trip to buy a bottle.

I have also found mini bottles sold in 4-packs. The bottles are about 1 cup of wine each, which is perfect for most recipes. The best part about these is they are cheaper than boxed wine and you can get them at more places. I have even found them at the drugstore checkout!

Again, lots of steps to this recipe, but they’re short and easy to follow. Most of the work is done by step 8, and the rest are primarily cooking. And by cooking, I mean setting a time and waiting for it to ding, beep, or buzz.

Although the overall cooking time is given, there aren’t specific times listed for the chicken, bacon, and vegetables. I like having times listed, so I got my iPad out and set the stopwatch function as I cooked. My pot was big enough to handle the chicken in 3 batches, and these steps went very smoothly:

Load more
I'm not going to lie: This stew is a fair amount of work, and it does take a while. The results are well worth the effort! It's thick, hearty, and filling. It's nothing like anything I've ever tasted, so huge bonus points for that. Cooking the wine mellowed the flavor. The chicken and vegetables were all infused with the taste of the wine and spices, and the broth was thick and fragrant. Definitely pair it with a loaf of crusty bread you can use to sop up the broth--you won't want to miss a drop!White Wine Chicken Stew
Hungry PinnerPin, Cook, Eat, Review