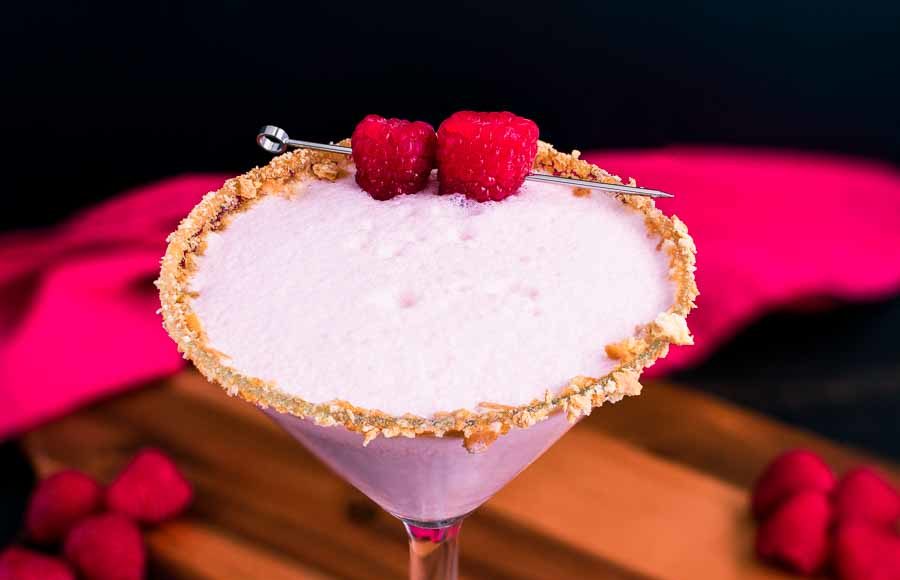 If you read my blog regularly, you might know that I work ahead a lot. I tend to make recipes 3-6 months in advance of posting them, and that’s exactly what happened with this one. I was getting ready to make Raspberry Baked Donuts with Raspberry Glaze when I stumbled upon this T.G.I.F. Raspberry Cheesecake Martini. Raspberries are touchy, and you have to use them almost immediately, so I decided to make the most of my delicate purchase and make two recipes with them. And it was a good excuse to have a martini, and who doesn’t like that?!

I don’t know about you but I absolutely L-O-V-E cheesecake!

Recipe Author: Lisa Cabanes at Social Couture
Get the recipe

At first glance, this Raspberry Cheesecake Martini recipe appears to have only four ingredients: vodka, Chambord, heavy cream, and sour mix. I happened to have all but the sour mix on hand. A quick run to the liquor store was all I needed, or was it?

I found an easy recipe for DIY Sour Mix, and I had all the ingredients for that too. It’s sugar, water, lemon juice, and lime juice. When I have extra citrus, I juice it and freeze it in ice cube trays for situations just like this. I had just enough frozen lemon and lime juice to make this recipe.

Actually, the recipe made a large bottle of sour mix—far more than I needed for a couple of T.G.I.F. Raspberry Cheesecake Martinis. So guess what? I froze the extra in ice cube trays just like I do with extra citrus. I label small zipper bags full of the cubes and set them into my freezer door for “emergencies”.

And as you can see, I didn’t have the brand of vodka, Finlandia, that’s specified in the ingredients list. I decided to go ahead and make this recipe anyway since you might not have that brand either.

Spoiler: Pinnacle has a sharp finish and may not have been the best choice for this cocktail. A sweeter vodka like Skyy or Tito’s would probably be a better choice. I’ve never tried Finlandia, so I can’t speak to its taste or sweetness.

Making these T.G.I.F. Raspberry Cheesecake Martinis (and I did make more than one!) was pretty straightforward. Add all the ingredients to an ice-filled cocktail shaker, shake well, and pour into a martini glass.

I like to use honey to rim sweet drinks. You can use water or a lemon/lime wedge, but honey’s thickness really makes the crumbs stick. Just add a bit of honey to a small plate, then add a graham cracker to a ziplock bag, smash it with your hands, and pour the crumbs onto a second plate. Dip the glass into the honey, then dip it into the crumbs.

I happened to have fresh raspberries on hand to add a cute garnish, but it’s totally optional. The recipe doesn’t call for it, and it doesn’t add to the taste of the cocktail. It does make it look pretty, though!

Load more
Y'all, cheesecake is my ultimate dessert, and putting it into martini form is a-ahhh! Harps playing, birds chirping, all that. I wanted to love this Raspberry Cheesecake Martini, but it was a touch too sour. Either the vodka or the sour mix cuts into the sweetness I was expecting, but the honey-graham cracker rim countered it nicely. I'm taking away a star from the Taste and Directions ratings because that wasn't in the instructions. I only thought of adding it because of the recipe's photo. Otherwise, making this martini was super simple, and the more I sip it, the more I like it. I'm calling this one a Pinterest success.T.G.I.F. Raspberry Cheesecake Martini
Hungry PinnerPin, Cook, Eat, Review