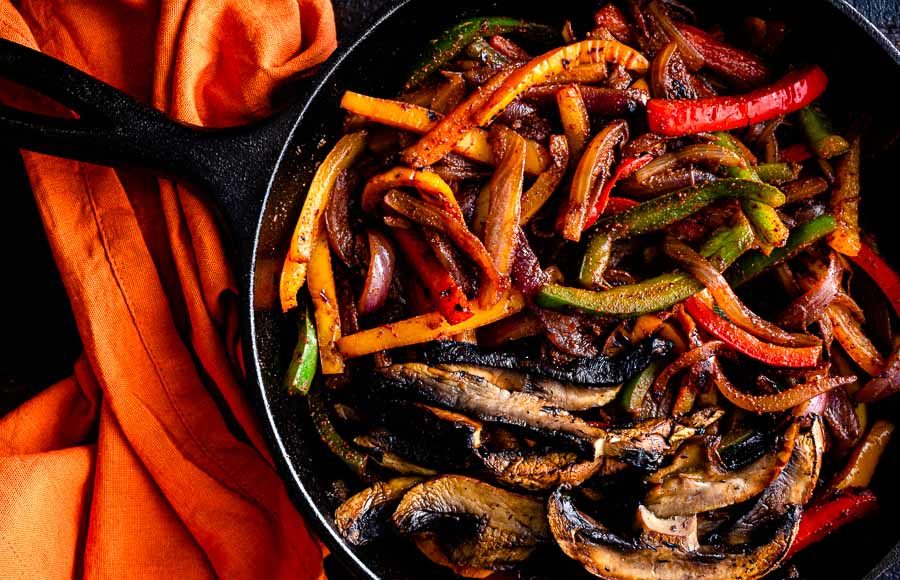 It’s the end of the week, and my husband and I wanted something different. Vegan Fajitas to the rescue! We usually have meat at dinner, but neither of us missed it tonight. These fajitas were quick, tasty, and easier to make than I thought they would be. Plus it’s super versatile, and you can add any toppings you like. We went with sour cream, cheddar cheese, and salsa.

This post was originally published on June 2, 2017. The text and photos were updated on July 24, 2021. The review and rating have not been changed.

To make this dish vegan, I went with my all-time favorite replacement – portobello mushrooms. They are the perfect texture, take on the seasoning really well and get all smokey and yummy. Trust me, you’ll find yourself eating this right out of the pan.

Recipe Author: Aimee at The Veg Life!
Get the recipe

The ingredients looked so yummy in the crisper, that we had both looked forward to these all week. Don’t let the long list of ingredients intimidate you as they did me. I expected the prep work to take a long time, but it went very quickly. Measuring the spices and chopping the vegetables was done in just 15 minutes, then on to cooking up my Vegan Fajitas.

This recipe didn’t include times for prepping and cooking the fajitas, but it was ready to eat in about 30 minutes.

The first time I made these Vegan Fajitas, I didn’t have a cast-iron skillet. Actually, the first several times I made this recipe—it has become a regular on my dinner table over the years. I was sure I had a couple (I remember packing them when we moved), but I never did find them.

A plain old skillet (not nonstick) worked just fine for me and gave me a similar charring on the onions and peppers. I did eventually buy a new cast-iron pan, though, and I highly recommend them for just about everything.

The veggies didn’t take nearly as long to prepare as I thought, and they also cooked quickly. The onions and peppers were cooked to a char in the time specified (11 minutes). The smell was heavenly at this point!

This is where I ran into trouble the very first time I made this recipe. I followed the accompanying blog post and sprinkled the fajita seasoning onto the mushrooms while cooking them. I added a generous amount of extra oil, then the mushrooms, then the spice mixture.

Unfortunately, the spices burned and caused my husband and me to have coughing fits. It was bad! I already had the overhead fan on, but we still had to open the kitchen windows and air out the house. Eek!

I have found over the years that seasoning everything at the end of cooking is the secret to a fume-free cooking experience. I like to sprinkle the seasoning onto the peppers and onions that I have previously set aside, thoroughly mix, then add back to the pan. This is especially true if you like to cook on high heat to really char the peppers and onions.

Load more
Although the spice mixture burned, the fajitas tasted great. The directions were clear and easy to follow otherwise. Everything went together quickly and I had these flavorful fajitas on the table in 30 minutes. The mushrooms were an excellent replacement for meat, and there was enough heat from the spices that extra hot sauce wasn't necessary. My husband and I both went back for seconds, and the recipe made a total of 8 fajitas using tortillas that were about 6 inches in diameter. Vegan Fajitas
Hungry PinnerPin, Cook, Eat, Review