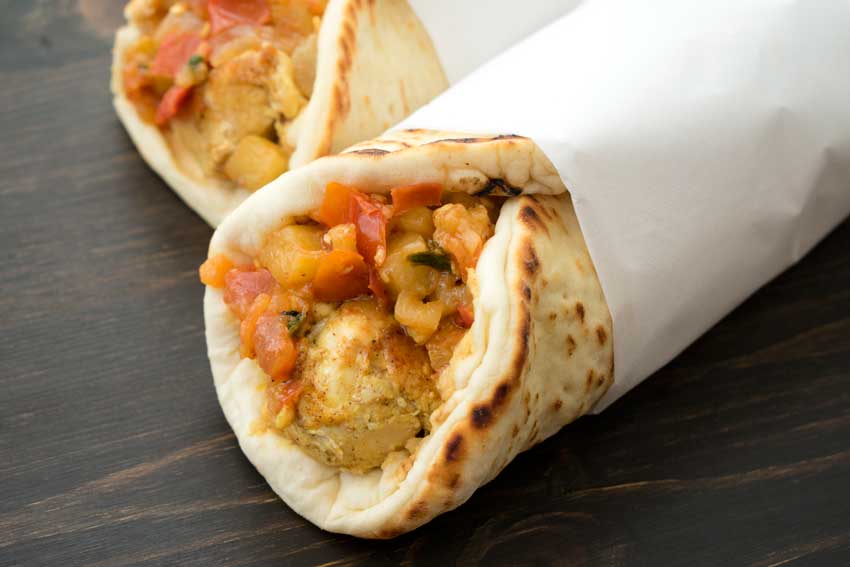 This recipe for Spiced Moroccan Chicken Wraps is one that I pinned a long time ago, really wanted to try, but, for some inexplicable reason, haven’t. It sounds ridiculously good and it’s full of things I love. Lots of spices, eggplant, hummus, and flatbread. If I’m totally honest, I think I’m a little intimidated. These spiced chicken wraps look kind of complicated and have a lot of ingredients. But I’m here to try new things and challenge myself, so no more excuses!

For me, the more spices the better, especially when it comes to a simple meal such as a grilled chicken sandwich wrap; and because there are typically only a handful of ingredients in a “portable pal” of this sort, it creates the perfect vessel for those magical powders to heat things up and warm the soul, not to mention the taste buds.

Recipe Author: Ingrid Beer at The Cozy Apron
Get the recipe

There are quite a few ingredients in this recipe, but most are produce and spices. I had the spices on hand, so shopping wasn’t too bad. The only things I couldn’t find were Japanese eggplant and Roma tomatoes. Instead, I substituted a regular “globe” eggplant and my favorite tomatoes on the vine.

I also decided to buy naan bread instead of pita. I had a feeling these spiced chicken wraps would need larger pieces of bread, and I was right. The pita available would have been way too small to wrap around the filling.

To get myself past being intimidated by all the steps in this recipe, I decided to break it into pieces. I know it was all in my head, but that really made it seem manageable. Here’s how I broke it down:

First up was making the marinade. I did this the same way I did the pork souvlaki I made last week. I added all the ingredients to an airtight container, gave it a good shake, then popped it into the refrigerator overnight.

I also made the hummus ahead of time to give the flavors time to meld. It was so easy! All I had to do was put all the ingredients into a food processor, blend, add some olive oil, and blend until smooth. I considered using my mini-prep but I think it would have been too small. Using the food processor was the safer bet.

I let the chicken and hummus sit on the countertop and warm up to room temperature while I made the chutney. This was the longest step or all, but it was just half an hour.

I skewered the chicken toward the end of the chutney cooking. Then all I had to do was pop the skewers into the grill pan and rotate them every 2-3 minutes. Finally, it was all ready to assemble, and that was the fastest and easiest part. When it was all said and done, I felt a little silly for letting a long recipe intimidate me. It really wasn’t difficult!

Load more
Spiced Moroccan Chicken WrapI absolutely loved these spiced chicken wraps! Juicy chunks of chicken marinated in a savory spice mixture, spicy hummus, eggplant-tomato chutney, all wrapped in flatbread sounds good and tastes far better. Each part of this recipe was good, but combining them made an almost indescribably good (and filling) meal. And don't let the long recipe intimidate you--it's not as much work as it appears to be.
Hungry PinnerPin, Cook, Eat, Review