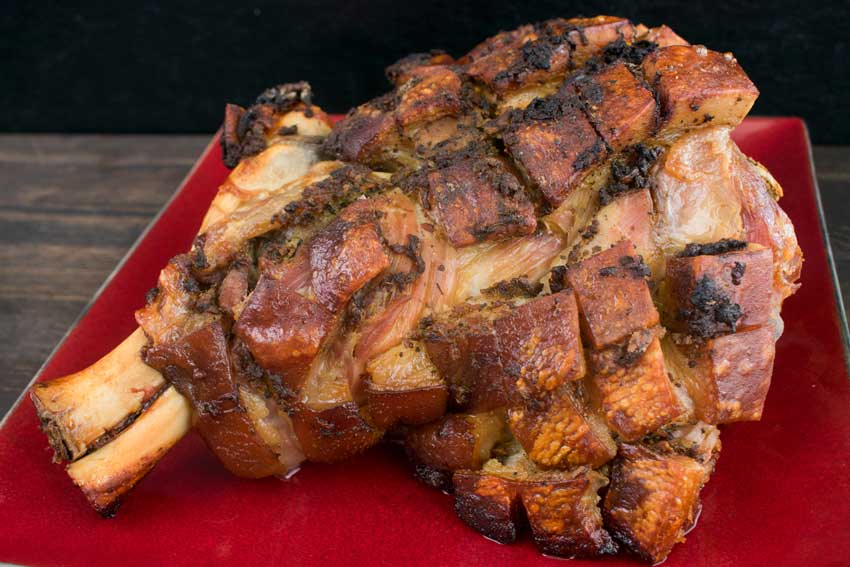 This recipe for pernil caught my eye while I was skimming through one of my Pinterest boards. I haven’t made a pork recipe in a while, and this sounded way too good to pass up. Why? I love Caribbean food and garlic, and pernil is both. Plus I’ve never tried it, and I am always up for trying new things, so let’s find out how delicious this Puerto Rican pork shoulder recipe is.

This is a delicious way to cook pork. I got this recipe from my boyfriend who is from Puerto Rico. This also makes excellent, moist meat for Cuban sandwiches.

Recipe Author: Michelle Figueroa at Genius Kitchen
Get the recipe

There aren’t many ingredients in this recipe, and I had all but one on hand. All I had to buy was the pork shoulder, and it turns out that eight pounds is a pretty average size for this cut of meat. The picnic pork shoulder I bought was just under eight pounds and just under $8. It was a very inexpensive cut!

The first part of this recipe is marinating the pork shoulder, and the first step to that is scoring the skin. I keep my knives sharp, and I still had some trouble cutting through the skin. It was tough, so be patient with it.

Next was making the marinade, and that was easy. The instructions say to crush the herbs using a mortar and pestle, but don’t worry if you don’t have one (I have one, but it was way too small for 12 cloves of garlic). My garlic mincer really did most of the work, so I didn’t need to worry about crushing the garlic. Instead, I put the herbs into a small bowl and used the back of a fork to blend the herb mixture into a paste. Then I added the liquids and gave that a good stir.

Once the marinade is ready, you need to pour it over the scored pork shoulder and work it into the skin so it penetrates into the meat. Once that’s done, the recipe says to place the pork shoulder into an aluminum pan, cover, and refrigerate.

I changed the recipe here and put the pernil into a large plastic bag–it was actually a crockpot liner, but it was the perfect size. I just bagged the pork shoulder, closed the bag with a twist tie, and placed it into the refrigerator to marinate for about 18 hours.

The reason I marinated the pernil this way is I don’t use disposable aluminum pans after seeing a very bad accident with one. My father in law was cooking a Thanksgiving turkey in one, and lots of juices collected in the bottom. The flimsy pan collapsed when he was taking the turkey out of the oven, and his hands were burned very badly by the hot liquid that spilled. If you use a disposable aluminum pan, please be very careful!

I chose to use a regular roasting pan instead, but I will say it had some disadvantages. Although it was sturdy, the roast did stick to the bottom. Also, I had to soak the pan overnight before I could get it totally clean.

Actually cooking the pork shoulder was very hands-off, but it did take a long time. Here is the breakdown of the entire process:

Load more
An inexpensive cut of meat, a few ingredients for the marinade, and a few hours on the oven make a pork roast you will fall in love with! It has crunchy, salty skin outside (called chicharrón), and juicy, fall-apart tender meat on the inside. It was so tender I barely got it out of the pan in one piece. This pernil was so good my husband had seconds, and he says he doesn't like pork (I had seconds too--it was incredibly good!). Oh, and the chicharrón I mentioned earlier cannot be skipped. I was reaching into the refrigerator to nibble on one every time I walked into the kitchen (there were lots of leftovers). Incredible!Pernil (Puerto Rican Pork Shoulder)
Hungry PinnerPin, Cook, Eat, Review