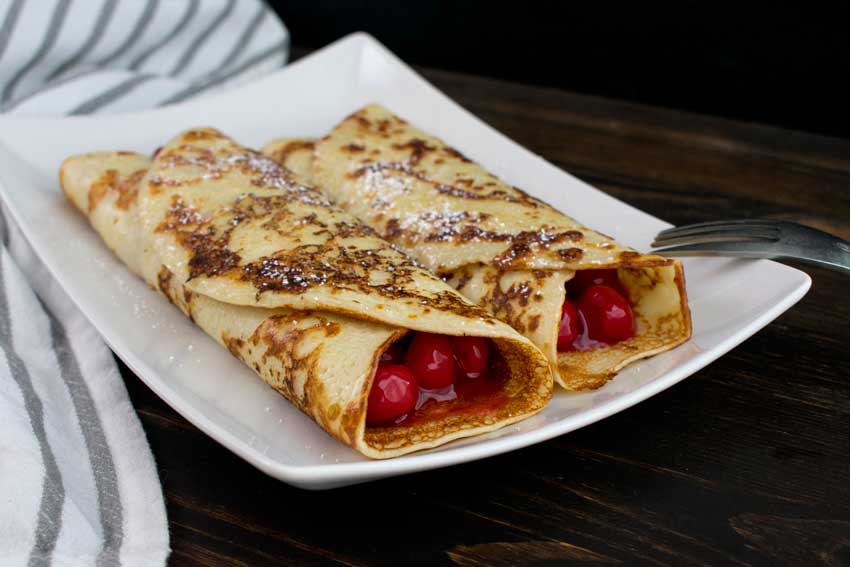 It’s been a while since I’ve reviewed a dessert recipe, so what better way to end my week of Hungarian recipes with Hungarian Crepes Stuffed with Cherries? I love cherries and have never made crepes, so this should be fun! I have to admit I’m a little nervous, though, because crepes are hard to make, right? Or not? Only one way to find out, and that’s to give this recipe a try!

Recipe Author: Aniko at Paprika & Paprika
Get the recipe
(scroll down for English)

There aren’t a ton of ingredients in this cherry crepe recipe, and I had several on hand. It’s full of basic ingredients I keep around like flour, sugar, powdered sugar, salt, and soda water (seltzer).

I also had the cherry liqueur on hand from one of my first posts for an Aviation gin cocktail. The bottle was around $30, and it’s pretty big. It’s going to last forever at this rate!

I only had to buy three items: eggs, milk, and a can of cherry pie filling. I know, I could have gone with fresh cherries, but I wanted to save some time and effort by using canned.

This recipe was written with metric measurements, but so my measuring glass came in very handy since it has ml’s. The cherries and flour are measured by weight.  Fortunately, the canned cherries had that listed (595 grams) but I did have to weigh the flour. Here are all the imperial measurements so you don’t have to convert them:

Next, I had to decide how much of the sugar and cherry liqueur to use since measurements are not given. I knew the cherry filling would be very sweet, so I settled on one tablespoon of sugar for the crepes. I had no idea how much “half a glass” of cherry liqueur was, so I decided to use three ounces. That was half of the measuring glass I used to measure the other liquid ingredients.

The crepe batter went together very smoothly, and I let it chill for an hour. Now it was time to start cooking! I made a few mistakes here because I didn’t research crepe-making techniques. Even so, I don’t think I did too badly for my first try at crepes.

First, I used a 10-inch skillet when I should have used an 8-inch skillet. I had to use a 1/2 cup+ of batter so it covered the bottom of the pan, and I only got five crepes because of the large size (the recipe lists 12). I could have used less with a smaller skillet and swirled it around to get it to cover the bottom and make the crepes thinner. Lastly, I added oil between each crepe. I later read you can make a few crepes before adding more oil. This was after reading several articles on making crepes, so consult the Google if you need more guidance.

While the crepes were frying, I got started on the cherry filling. It was super easy to make in a small saucepan between flipping the crepes. Here is how long the entire process took:

Load more
Mmmm! These crepes are all about the cherry filling, and it doesn't disappoint! Simmering the cherries with cherry liqueur give them a delectable flavor that pairs perfectly with the sweet crepes. Converting the measurements from metric to imperial wasn't difficult, but I did have to guess at the amounts of some ingredients because they were very general. Also, I'd advise researching how to make crepes before starting as the instructions don't include the techniques. I did pretty well with no prior knowledge, but I think I could have done better. All in all, I'm glad I tried this recipe and would make it again.Hungarian Crepes Stuffed with Cherries
Hungry PinnerPin, Cook, Eat, Review