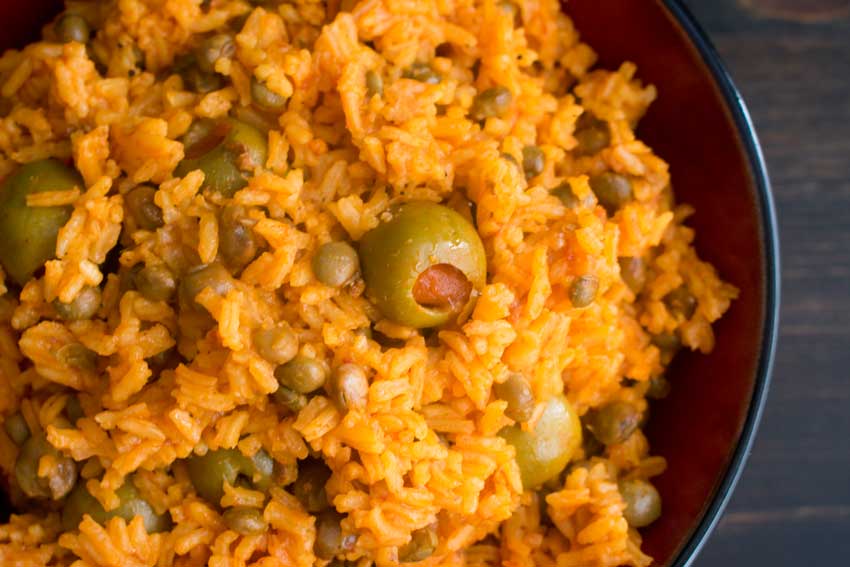 When I decided to make pernil, I was over the moon when I read that it’s normally served with pigeon peas and rice. My dad was Bahamian, and pigeon peas and rice (we call them peas and rice) are favorite Bahamian comfort food. What would have been his 77th birthday passed recently, and the timing was so right to try a new recipe for peas and rice. He loved food in general, Caribbean food in particular,  and was a big fan of my cooking. Miss you, Dad ?

Recipe Author: Heidy at The McCallum’s Shamrock Patch
Get the recipe

The list of ingredients for this recipe wasn’t too long, but I had to buy most of the items. Nothing was expensive, and I was able to find everything at my usual grocery store.

One item that might be confusing is the adobo. It comes as a powdered seasoning or more of a sauce. I had adobo sauce on hand, so I chose to use that. However, now that I look back, I think the recipe calls for adobo seasoning. Fortunately, only 1/4 teaspoon was needed, so I doubt it made much of a difference in the taste.

Oh, and if you’ve never used sazon seasoning, you’ll love it! You can add it to anything and it magically makes it better. I’m not kidding! But be careful because it turns anything it touches yellow–fingers, dish towels, countertops… You get the idea, so use with caution.

A 4.5-quart pan was just the right size for this recipe, but the instructions were a little confusing.

Steps one and two calls for adding the olives. I added them at step one and didn’t have any problems. I don’t think it would make a huge difference if they were added at step two.

The real confusion for me came at step three and four. Step three says to boil the rice until most of the water has been absorbed. Then step four says to cook the rice until it’s tender (about 30 minutes).

My thinking was the rice would burn if I cooked it that way, so I skipped the part of step three that called for boiling until most of the water was absorbed. The reason was I knew the water would absorb anyway if I followed step four, and that’s exactly what happened. I think I would have ended up with a bunch of burned rice if I had followed the instructions exactly.

Load more
Rice with Pigeon Peas (Arroz Con Gandules)Earthy pigeon peas, salty olives, and the perfect amount of seasoning make a side dish you'll love! I found the instructions a little confusing, but a simple change was all that was needed for this recipe to turn out picture perfect. It took a while longer than specified (50 minutes compared to 35), so be sure to allow some extra time when preparing.
Hungry PinnerPin, Cook, Eat, Review