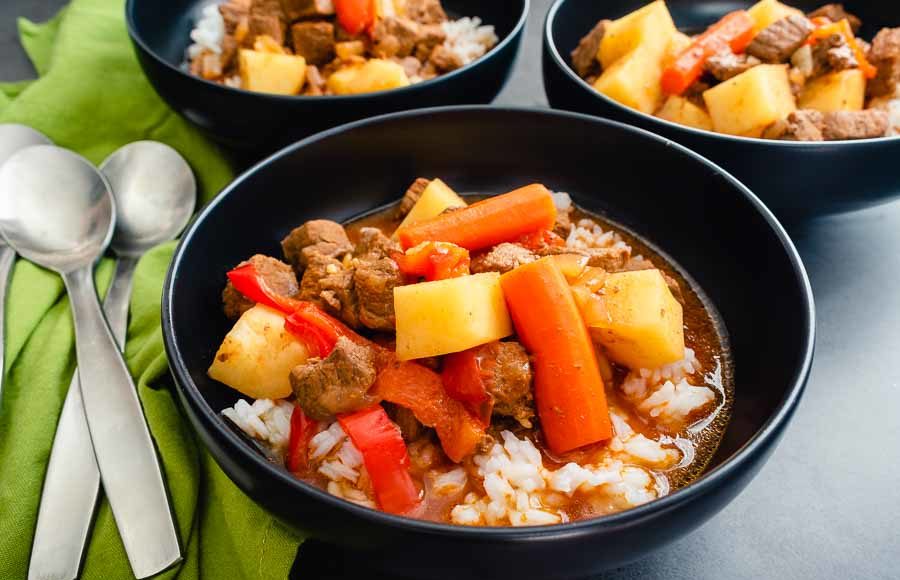 Beef stew is a classic wintertime comfort food, and I look forward to trying a new recipe every year. It has become a tradition, and this year I’m trying Mechado, a Filipino beef stew. It has a lot of the same ingredients as the American beef stew I grew up with plus a few Asian items that I have come to love. I’m so curious to find out what this version of beef stew will be like!

Mechado is the Philippine version of the ubiquitous comfort food with a wonderful depth of flavor that comes from browned garlic, marinated beef, and the complex flavors of patis, or fish sauce.

Recipe Author: Liren Baker at Kitchen Confidante
Get the recipe

When I bought the duck breasts I made a while back, I also picked up a bag of beef stew meat. I’ve had it freezer just waiting to become Mechado.

This recipe calls for 1.5 pounds of beef, but the bag I bought was 2 pounds. I measured out the extra half-pound, and it wasn’t a lot of meat. I decided to throw it into the stew because it was such a small amount. Besides, more beef in the stew can’t be a bad thing!

I had to buy the vegetables, beef stock, and tomato sauce. The rest was sitting in my pantry, so shopping was short and sweet.

I didn’t simmer the Mechado for the maximum time because I had to squeeze in photos before the sun went down and I lost the light. Still, the whole process took me a little more than the 1 hour 50 minutes listed. I think it’s because I had to brown the meat in 3 batches, but I’d say it was worth it. Here’s how my time was spent:

Things started off with marinating the beef in a mixture of soy sauce and lemon juice for 30 minutes. My largest Snapware container was the perfect size for this (the 8.5-cup shallow rectangular shape). It was just large enough to fit the meat without much leftover space. That kept it soaked in the marinade instead of allowing the liquid to pool at the bottom.

I finished prepping the vegetables while the meat was marinating. That only took 10 minutes, so I had time for a little break. Oh, this is when I also flipped the container of beef to make doubly sure the marinade soaked into all the meat.

Once the timer for the marinade went off, I got back into the kitchen and started cooking. The recipe starts off with browning the garlic. Tip: Make sure to keep an eye on the pan while the garlic browns because it can go from zero to charcoal fast. Also, removing it from the pan was tricky. The tiny pieces of minced garlic fell through my slotted spoon. That meant carefully removing it with a regular spoon while trying to drain the hot oil back into the pan so I didn’t burn myself. I left a few bits in the pan, but I got most of it safely.

Next up was browning the marinated meat (be sure to reserve the marinade—you’ll need it later). I used my 5.5-quart Dutch oven, and it took me 3 batches. Tip: Browning all the meat once would have crowded the pan, keeping it from browning. Having space between the chunks of meat helps it get a nice sear.

After that, the recipe continued with adding the rest of the ingredients (except the vegetables) over a few steps to add some depth of flavor. Once that was done, I set the timer for 45 minutes, did some dishes, and relaxed a bit.

I found the stew was ready when I checked on it, but I gave it another 15 minutes. I would have simmered it longer, but I had photos to take before it got too dark.

The final step was adding the potatoes and carrots and simmering for another 20 minutes. (BTW, this is the perfect time to cook the rice.) This cooked them just until they were tender but prevented them from getting mushy and disintegrating. I was pleased with the flavor, so I didn’t add any salt, just a dash of pepper.

Load more
MechadoI'm not quite sure how to describe the flavor of Mechado. Is bomb AF acceptable? Seriously, it was everything beef stew should be and then some! Tender chunks of meat, vegetables that were cooked just right but not falling apart or mushy, and a really flavorful broth. Serving it over rice added a little something, and it made a wonderful meal. It was so good we both had seconds! Making this recipe was smooth sailing from start to finish, and I have to say I enjoyed the process. This is another Pinterest success that will be going into my favorites list.
Hungry PinnerPin, Cook, Eat, Review