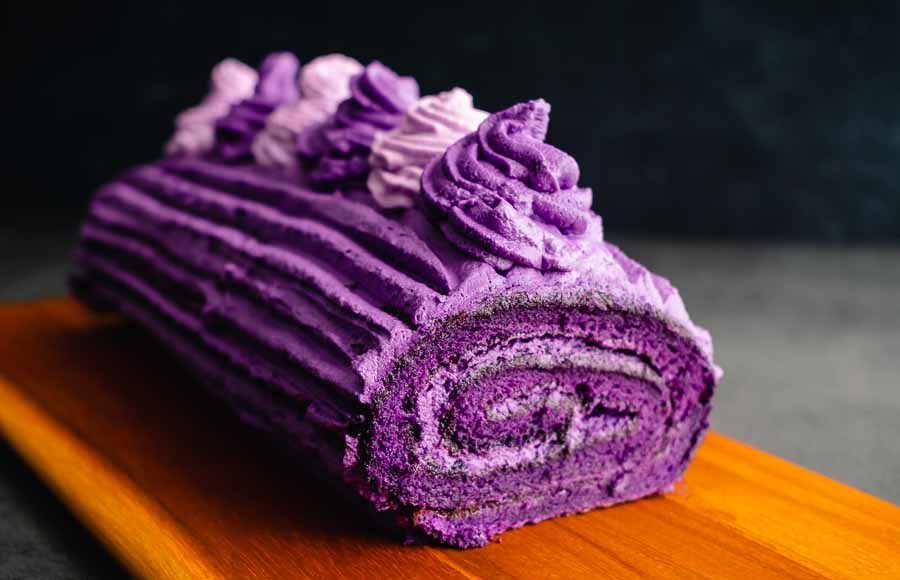 My first foray into Filipino food was the Mechado I just made, and it was divine. But y’all know I had to follow it up with a Filipino dessert recipe! I did some searching through Pinterest and ube, purple sweet potatoes/yams, kept popping up. There were dozens and dozens of dessert recipes, and I had a hard time choosing one to make. I ended up deciding on this Ube Cake Roll because it looked like a challenge. I’ve never made a cake roll or had ube, so I’m going to change all that with one recipe. Let’s dive in!

Ube Cake Roll is made of a soft ube flavored chiffon cake rolled and filled with ube whipped cream.

Recipe Author: Sanna at Woman Scribbles
Get the recipe

Most of the ingredients in this recipe were typical cake ingredients like flour, sugar, and baking powder. I had all those on hand plus the canola oil and cream of tartar.

All I needed to buy was the eggs, milk, whipping cream, and ube extract. I found everything but the ube extract at my regular grocery store. No worries, though, because the ube flavoring was just a click away for about $5 for a 2-ounce bottle (more than enough for this recipe).

Tip: You’ll also need some cooking spray and parchment paper to prepare the sheet pan, so make sure you have them or pick some up with your groceries.

The total time for this recipe is 47 minutes, which I thought was quick for a cake. but I’m not the greatest baker, so… Anyway, here’s how my time was spent:

My time would have been 49 minutes without cooling, and that’s right in line with the total time listed on the recipe.

Things began with mixing up the cake batter. This part was done in 3 sections, and it was pretty easy. First, mix the wet components of the cake batter in one bowl and the dry in another then combine. Next, you make a meringue in your stand mixer and combine it with the first part. (You can use a hand mixer for the meringue, too, but I don’t recommend trying it by hand.)

Once the batter is mixed to a uniform color it’s added to a prepared sheet pan and baked for 12 minutes. I let mine cool for an hour after it came out of the oven. It was probably okay around the 30-minutes mark, but I wanted to make very sure.

While it was cooking, I mixed up the ube whipped cream. The instructions don’t say how to do this, so I made an educated guess. I cleaned my stand mixer’s bowl and whisk attachment and mixed all the ingredients together until I had stiff whipped cream. That’s it.

Now it was time for what I expected to be the hard part: icing and rolling the cake. Removing the cake from the pan was easy thanks to the detailed instructions in Step 4. I’m sure the parchment paper and cooking spray helped too LOL. I was pleasantly surprised. Rolling the cake was easy, and so was frosting it, and I used a notched icing smoother to spruce it up.

I thought I had enough of the whipped cream left over for decorations, but I wanted to make sure. I used the extra 1/2 cup of whipping cream, 3 tablespoons of powdered sugar, and some violet food coloring I had in my pantry to make lavender whipped cream. Then I filled 2 pastry bags with piping tips and made alternating color dollops on top. So cute! Unfortunately, I forgot to time this part, but it went by quickly and is optional.

Load more
This Ube Cake Roll was my first time tasting ube, and I'm in love with everything about it! It was sweet, of course, and tasted sort of like vanilla with a faint coconut flavor. It was also so light, airy and the most gorgeous color purple. I was almost sad when it was gone. I thought making a cake roll would be difficult, but this recipe walked me through the whole process. I was surprised at how easy it was being that I'm not a baker. The instructions were missing steps to make the ube whipped cream frosting, but I managed. It's whipped cream, just pour the ingredients into a mixer, turn it on, and wait until whipped cream happens. Overall, a huge Pinterest success, and I will be trying more ube treats thanks to this cake.Ube Cake Roll
Hungry PinnerPin, Cook, Eat, Review