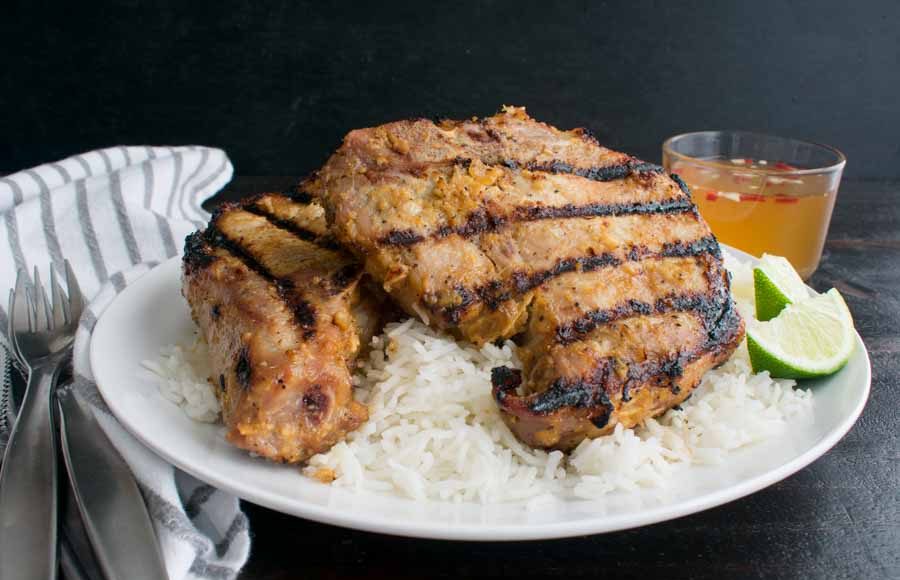 It’s definitely a Florida summer, and it’s time to grill! Last week’s Grilled Flank Steak Tacos were going to be the first time I grilled this season, but that didn’t go according to plan. But this week the grill has been fixed, cleaned, and is ready to go. That delicious flank steak would have been even better on the grill (everything is), but I think I’ve found the next best thing in thick, juicy pork chops. This recipe for Vietnamese Grilled Lemongrass Pork Chops sounds like it will be phenomenal. I’m hoping for something like what I get at my favorite Vietnamese restaurant. Those are high hopes, but I’m going for it!

There weren’t a lot of ingredients in this recipe, but I did have to visit two grocery stores to find everything. I can only find lemongrass stalks at Whole Foods, so I bought most of my ingredients there.

BTW, if you can’t find whole lemongrass stalks locally, you can find them online or substitute lemongrass paste or dried lemongrass. I’ve used a paste that comes in a tube in the past (I forget the brand), and it is just as good as fresh.

I did make a special trip to Publix for the pork chops, though. They have 1-inch thick bone-in center-cut pork chops that I had in mind the moment I read this recipe. I’m the only one in the house who eats pork chops, so I only bought two. The package was just under $7.

Most of the work for this recipe was in making the marinade, but it wasn’t difficult at all. I was hoping I could just throw all the ingredients into my mini-prep, but it didn’t quite work out that way. It was necessary to mince the garlic and shallot in order to measure it. I also had to peel off the tough outer leaves of the lemongrass stalk and chop it a bit.

Once I had that done, it was barely any work. I just pulsed the marinade ingredients in my mini-prep then added everything to a ziplock bag to marinate overnight. At the same time, I made up half a batch of nuoc cham sauce. I knew I would want it for dipping when I ate the pork chops.

The next day I got ready to grill and noticed something a little confusing in the recipe. At that step, the instructions are repeated. It looked like an editing mistake by the author, and it was easy to figure out the proper time and temperature.

It took a while to heat the grill to 550℉, but the result was worth it. I ended up with beautifully seared pork chops complete with grill marks. Here’s how my time was spent on this recipe:

It’s worth noting that even though the pork chops I used were quite thick, they didn’t take the full 8 minutes to fully cook. I’m glad I used my meat thermometer so they didn’t overcook and dry out!

Load more
The author calls these pork chops porky goodness. I call them porky perfection! The prep work and cooking didn't take all that long, and the instructions guided me through it pretty clearly for the most part. The end result was a pair of pork chops that were seared on the outside and tender and juicy on the inside. The flavor the marinade imparted was what I would expect for a Vietnamese pork dish--a nice blend of sweet, salty, and tart flavors. In fact, it was so good that I was halfway through my pork chop before I remembered I needed to pay attention to the flavors for my review!Vietnamese Grilled Lemongrass Pork Chops
Hungry PinnerPin, Cook, Eat, Review