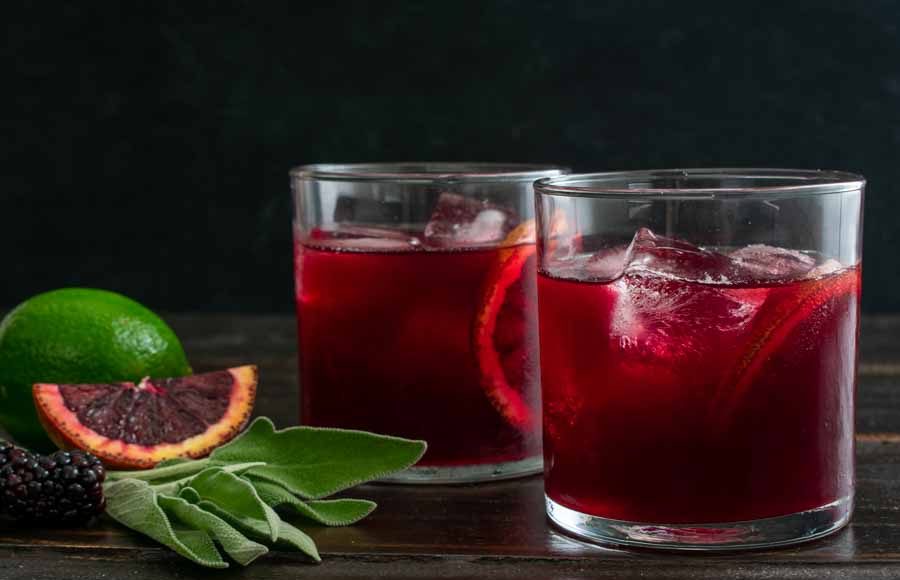 Those Grilled Flank Steak Tacos I made earlier this week were oh so good! But I needed an equally delicious drink to accompany them. Good thing I found this Burnt Sage and Blackberry Sangria for Two! Like the tacos, this sangria mixes traditional ingredients with a few unexpected ingredients. But what really attracted me was the fact that it’s a small batch of sangria. Most recipes I’ve come across require an entire bottle of wine plus fruit juice. It’s way more than I can drink in one serving since I’m the only one in the house who drinks it. This recipe sounds like it will solve my problem of leftover (and not as good as when I first made it) sangria. Let’s find out!

This is way more complex of a Sangria than I thought I would be able to get out of it. This is due to an extreme case of being flustered, tired, and combatting a cold. To sum it up, I was too lazy to check in on it after the first day and just let it sit for two days in the fridge. Result: a sangria for cocktail lovers.

Recipe Author: Elana at Stir and Strain
Get the recipe

The ingredients for this sangria recipe were all available in my area, but I had to visit three stores to get them all. That’s a lot of effort for me, but I was pretty motivated. The wine, sage, blackberries, and limes were all found at Publix. Then I had to hit up Fresh Market for the blood oranges, and Winn Dixie for the bourbon.

I used one of my favorites, Bulleit Bourbon, instead of the Four Roses the recipe calls for. Winn Dixie had Four Roses, and I’ve wanted to try it, but it was $50 a bottle. Yikes! I’ve heard it’s good, but that was too splurgy for my budget. Bulleit was half that.

This sangria has to sit in the refrigerator for 2 days, so I made it well ahead of when I planned to drink it. That can be good and bad. Good if you’re throwing a party and want to have your drinks prepared ahead of time. Bad if you run out. Very bad LOL!

I mixed up the other ingredients while the simple syrup was steeping and cooling. Then all I had to do was add it to the sangria and pop it into the refrigerator for a couple of days. Mixing everything up took 22 minutes.

The recipe says to store the sangria in a mixing glass topped with a Boston strainer. I hate the way wine and liquor taste when they oxidize, so I went a different route. Instead, I chose a small, sealed 2-cup container that the sangria nearly filled. That way there was very little air inside the container and none got in. It kept everything nice and fresh.

Load more
Burnt Sage and Blackberry Sangria for TwoSo how was my Burnt Sage and Blackberry Sangria? It was everything! Some of the ingredients were a bit surprising, but they worked beautifully together. The sangria was sweet and fruity with a slight taste of bourbon and just a hint of pepper and sage. And I have to say the sweetness from the black peppercorn simple syrup was just enough to cut the dryness of the wine and not too much as to be cloying. I really wasn't sure if adding simple syrup instead of fruit juice would be good, and I'm happy to say it was. The recipe was very quick and easy to make and, and produced one of the best sangrias I have ever tried.
Hungry PinnerPin, Cook, Eat, Review