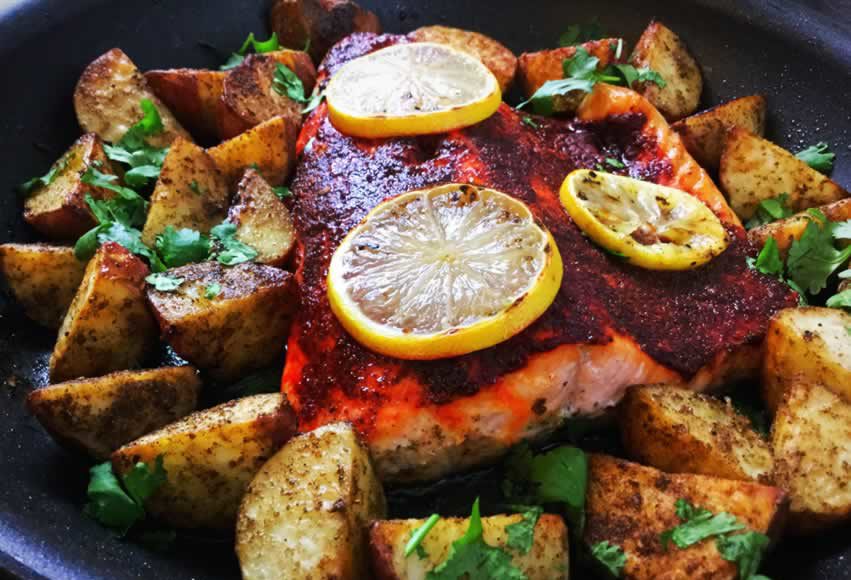 I love Indian food, and tandoori chicken has always been a favorite of mine. I think it’s because it’s one of the first Indian dishes I learned how to cook. I’m always on the lookout for new things to try, and tandoori salmon sounds too good to resist. It will get me out of my rut of poached salmon, and I get to try a new tandoori dish. That’s a win-win!

This salmon is an easy crowd-pleaser and makes a quick week night dinner for the family and guests! I roasted a few potatoes and added the salmon on the same pan when the potatoes were almost done, so it’s an easy clean-up as well. Bonus!

Salmon can be splurgy, but I do try to watch my budget. Although wild is considered the best, I normally buy farmed salmon because it’s half the price. In this case, that’s $11.99 per pound versus $20.99 per pound. Honestly, I don’t think I would be able to tell the difference if I had them side-by-side. My biggest concern is how fresh it is and that there are no bones.

Although the author does link to her tandoori masala recipe, I opted to use my regular brand, Rajah tandoori masala. Her recipe sounds easier than most because it doesn’t require you to roast then grind any of the spices. However, I had ready-made on hand, and it’s just easier. It also adds a bright coloring to the fish because it contains red food color.

One last thing, don’t forget to add cilantro and red onion to your grocery list when you shop for this recipe. They are mentioned as garnishes in the description, but neither appears in the list of ingredients. I was lucky and had cilantro on hand, but no red onion.

The first part of this recipe is marinating the salmon. It’s just a matter of making a very simple paste of tandoori masala, salt, and olive oil, then spreading it over the fish. That took just 3 minutes, quick enough that you could do it in the morning before work. The recipe specifies marinating the salmon for “at least 1 hour,” so I figured the longer the better and marinated my fillet for 4 hours.

The second part is prepping the remaining ingredients and cooking everything. I used quartered new potatoes for my dish. They were very easy to prep and season, and I had them in the oven within a few minutes. I was able to finish the rest of the prep work–chopping the cilantro and slicing the lemon– while they cooked.

The total time to prep and cook my tandoori salmon came in at 44 minutes. Pretty darn close to the time listed. I did notice the lemon slices and potatoes weren’t getting brown, so I decided to put the skillet under the broiler for a few minutes. I think it was the perfect way to crisp the potatoes.

If you decide to do this, set your oven racks up in advance. Trust me, it will make things much easier! Put one rack 1-2 notches below the broiler, and the other just below the middle. It will save you from having to reposition very hot racks and keep the oven temperature from dropping whole you are repositioning them.

Load more
Tandoori SalmonSalmon is the only fish I can occasionally get my husband to eat, and he ate every last bit of this dish! The potatoes were crispy outside and soft on the inside, and the seasoning was perfectly done. The marinade for the salmon was a little too salty for us, but it didn't stop us from enjoying our meal. We both agreed it should have been reduced by at least half. Live and learn. Otherwise, this is the perfect weeknight meal. One pan, a main and a side, and it's easy to make.
Hungry PinnerPin, Cook, Eat, Review