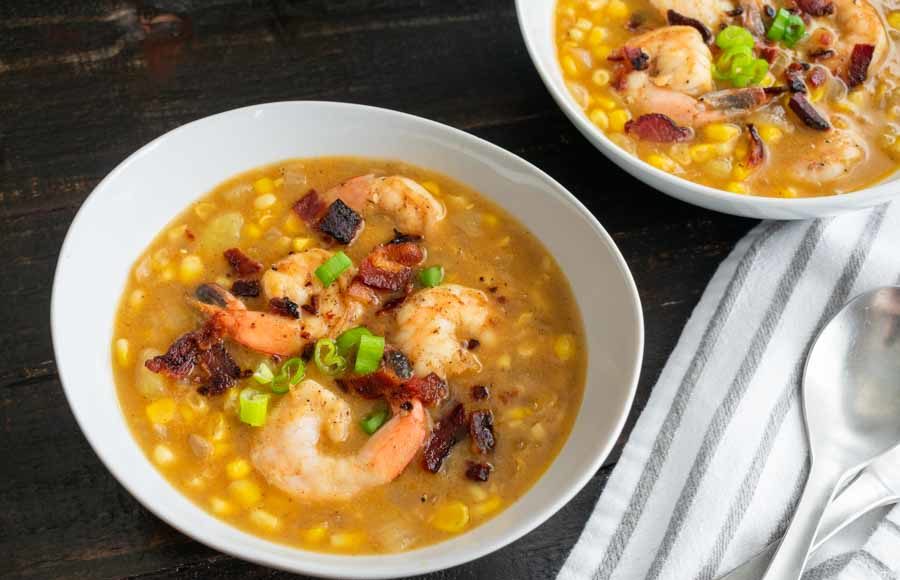 It’s a new year, and I had so much trouble deciding what recipe to start out with. Do I want sweet? Savory? Spicy? I must have pinned thousands of recipes to choose from, and just couldn’t decide. After bouncing back and forth between a few options, I chose D) all of the above with this Sweet Corn, Peppered Bacon and Shrimp Chowder. It promises all of the flavors I was considering in one dish. There, that was easy LOL!

Sweet Corn, Peppered Bacon and Shrimp Chowder is everything you could dream up in a soup and then some.

Recipe Author: Victoria Townsend at Dash of Savory
Get the recipe

This recipe does have quite a few ingredients, but nothing too unusual. As usual, I had a few of the basics on hand like the butter, oil, and spices. That left me to shop for the meat, produce, chicken stock, and beer, all of which were readily available at my regular grocery store. They even had conveniently shucked corn cobs, which eliminated the frustration of trying to get rid of all the cornsilk. It’s the little things.

This recipe had a lot going on at the outset, but it wasn’t too much to handle. The instructions broke it all down into easy to follow steps that took a total of 1 hour 7 minutes to complete.

The oven took a few minutes to preheat, so I ended up cooking the corn and diced potatoes at the same time. That left me 20 minutes to prep the rest of the ingredients, which was plenty of time. I even managed to get the bacon fried up in my 5-quart Dutch oven.

The potatoes were done after about 15 minutes, so I drained them and had them pureed in my food processor before the corn was finished.

The corn finished just as I was done with that, so I got started removing it from the cob just as instructed. As I started, I noticed the ramekin I used as a platform in the mixing bowl slipped a little, so I placed a napkin underneath it. That fixed the slipping, and removing the corn was simple.

With all that done, it was time to start the chowder. Things continued to go smoothly until I got to step 10. It starts with ‘Stir in the and’ but the what? I used the process of elimination to figure out it was corn, and that got things back on track. I had my Sweet Corn, Peppered Bacon and Shrimp Chowder ready to serve a few minutes later.

Load more
Sweet Corn, Peppered Bacon and Shrimp ChowderThis Sweet Corn, Peppered Bacon and Shrimp Chowder was everything I hoped for and more! Sweet corn, salty bacon and shrimp, plus a bit of peppery spice all rolled into one meal. It was good the day I made it, but it got even better after a night in the refrigerator. Funny how that works! This recipe does have a lot of ingredients and steps, but it was written up with easy to follow steps to get you through it. My suggestion is to plan to make it on a Sunday, put it into the refrigerator, and serve it the next night (or two) after the flavors have melded. And don't forget to buy a crusty loaf of bread to go with it!
Hungry PinnerPin, Cook, Eat, Review