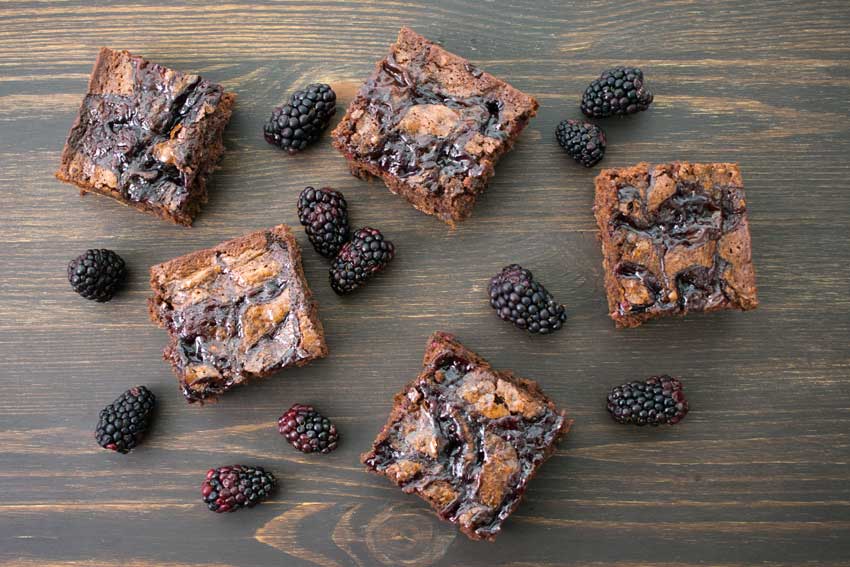 The end of summer is approaching fast, but there’s still time to enjoy one of my summer favorites: berries. Specifically, blackberries. It’s become clear that I’m obsessed with them, but chocolate and beer are way up there on my list of likes. And what a coincidence that I found a recipe that combines all three in these Chocolate Stout Blackberry Brownies! Pinterest has already shown me that beer and chocolate make good brownies with the Five Ingredient Guinness Brownies recipe I tried a while back. Let’s find out if adding blackberries makes the combination even better!

Recipe Author: Carrie at Frugal Foodie Mama
Get the recipe

I did have to make a special trip for my blackberry brownies to get the chocolate stout. I don’t get to Trader Joe’s too often, so I made an extra effort for this recipe. The author was right–they have a wonderfully chocolatey chocolate stout.

As you can see, the rest of the ingredients are pretty ordinary items that most grocery stores should have stocked.

I usually make brownies from scratch, so I randomly grabbed a box of mix off the shelf. Then I noticed it was labeled ’13″x9″ family size’ and the recipe calls for a 9″x9″ pan. I thought I’d have to reduce the amount of brownie mix until a quick google showed me the box was pretty much average size. Oh, and I could have turned it over and seen the adjustments for a smaller pan… Live and learn.

So now that my brownie mix dilemma was solved, it was time to do some baking. The list of ingredients was short, and the directions were clear. Everything went together without a hitch. I took the author’s tip and mashed my blackberries with a bit of the chocolate stout using a potato masher. Unfortunately, I didn’t strain them, and the seeds were kind of irritating (those suckers really get stuck in your teeth!).

I was especially proud of the nice marbling effect I was able to get. How, you might ask? Here’s how I did it:

Finally, it was time to bake my blackberry brownies. I did deviate from the recipe for this step and followed the instructions on the brownie mix. Specifically, I baked my brownies for 50 minutes at 350 degrees. They came out perfect with a crisp top and gooey center.

Load more
Chocolate Stout Blackberry BrowniesBeer, chocolate, and blackberries are a terrific combination! These rich, gooey brownies were all about the chocolate, but the blackberries and chocolate stout added a nice touch of flavor. This recipe made nine thick blackberry brownies in just over an hour. I recommend straining the fresh blackberries once you mash them as the seeds were a little annoying. Otherwise, this recipe was a huge hit!
Hungry PinnerPin, Cook, Eat, Review