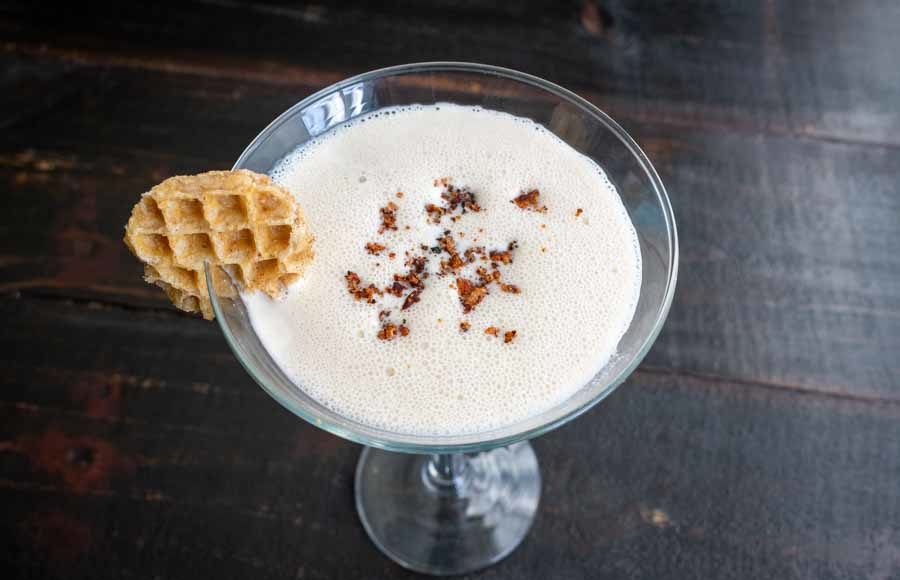 I love breakfast, but I’m not a morning person. That means I usually grab some leftovers or, if I’m feeling particularly ambitious, I make a smoothie. But I do miss traditional breakfast foods like bacon, eggs, and pancakes, so I’ll order them for dinner once in a while. Well, now I can also have some of those flavors in a cocktail! This Maple Syrup Cocktail is not only made with maple syrup but it’s also garnished with bacon bits. Oh my! And since cocktails are usually made later in the day, I’m all about giving this recipe a try!

A fun, creamy cocktail sweetened with maple syrup and garnished with waffles and homemade bacon bits! It’s breakfast in a glass!

Recipe Author: Sugar and Charm via Tablespoon
Get the recipe

Most of the ingredients for this cocktail were easy to find or things I had on hand. I had the dark rum and Irish cream, but I had to pick up the bacon, milk, maple syrup, and waffles.

The waffles were the hard part. Well, sort of. The only mini waffles I could find were from Eggo, and they were cinnamon toast flavor. I thought the flavor was a bonus, but I didn’t care for the toast shape and ended up cutting them into rounds.

First up was making the bacon. I fried it up the night before while I was making dinner, but I completely forgot to time it. Doh! But I think I’ve made enough bacon in my life to safely say it took about 10 minutes to get it nice and crispy.

The cocktail and garnish were up next, and the whole process took me four minutes. This is the first cocktail I have ever made that required me to pop something into my toaster, and it was a little weird.

The cocktail portion was really standard—just add ice and the liquid ingredients to a cocktail shaker and shake. Then top with a sprinkle of bacon bits. I chose the smallest bits because drinking large chunks of bacon didn’t sound like it would be pleasant.

The toaster popped while I was making the cocktail, so the garnish was ready to prep. I wanted a round garnish, so I used a tablespoon and paring knife to cut one out. Then I added a small slit so the waffle would stay on the side of the martini glass. It worked a treat!

Load more
This Maple Syrup Cocktail is nice and sweet with a touch of maple flavor. I loved it! I wasn't sure if I would like the bacon bits, but they turned out to be a nice touch since they added just a touch of saltiness to counter the sweetness. And I have to confess that I enjoyed dipping the waffle garnish in it. The cocktail was easy to make and only took me a few minutes, even with the garnish. I don't usually say this about sweet cocktails, but I want another one!Maple Syrup Cocktail
Hungry PinnerPin, Cook, Eat, Review