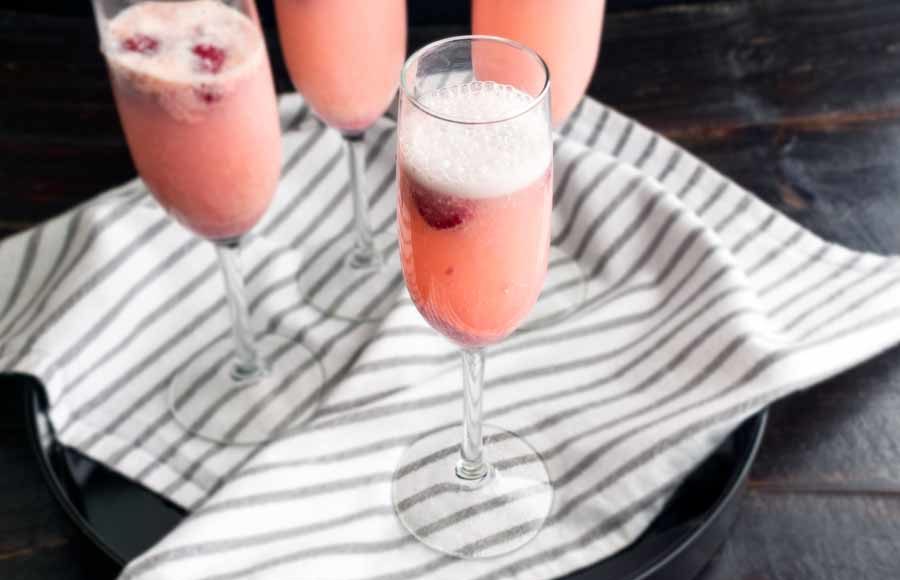 I don’t know about you, but I do love a mimosa. Or two. I don’t think I can have just one! I also happen to love raspberries, so a raspberry mimosa is a no-brainer. It can’t possibly get any better, right? Wrong! Try making those raspberries into a sweet frozen dessert called granita first, then add that to a mimosa. Boom! I have no idea what granita is, but it sounds a lot like sorbet, and I’m about to try making it.

These raspberry mimosa cocktails are a special treat! They are made with a creamy frozen raspberry granita and topped with sparkling wine. Perfect for New Years cocktails or a refreshing summer drink, this mimosa recipe is sure to be your new favorite!

Recipe Author: Julie & Debbie at Cooks with Cocktails
Get the recipe

I had some shopping to do for this recipe, but it was minimal. My usual grocery store had everything I needed in stock. They even had a bottle of my favorite La Marca prosecco which happened to be recommended by in the blog post that accompanied this recipe. Great minds LOL!

Most of the “work” for this recipe is in making the raspberry granita, but it was a very simple process. The entire process took me 15 minutes.

I started by melting the frozen raspberries in a small saucepan and stirring in the sugar. Once they were melted, I gave them a quick stir with my immersion blender, then I strained the puree into a storage container.

The pureed raspberries were quite thick, but I found that stirring them with a wooden spoon helped push the mixture through the mesh sieve. I was tempted to skip this step, but I’m glad I didn’t because there were tons of seeds left in the strainer. I was really surprised at the amount, and I’m glad they didn’t end up in my mimosas.

From there all I had to do was stir in the half-and-half and freeze the granita. I left it in the freezer overnight to make sure it was set. And the next day I had a giant raspberry ice cube.

I was able to scrape off enough granita to make a few mimosas, but it was a struggle. After I finished my second raspberry mimosa, I started researching granita to find out if something had gone wrong (I really wasn’t sure if this was the norm for granita).

I found an article full of tips and tricks on how to make granita. It’s a little more involved than what’s in this Raspberry Mimosa recipe, but not too much. I’ll use this method next time.

Load more
Freshly made raspberry granita added to a mimosa is positively brilliant! The sweet and creamy granita added some fruitiness and softened the taste of the prosecco. The result was a very sippable and pretty cocktail. The granita was quick to make, but this recipe omitted some steps that would have made the granita easier to scoop. It wasn't a show-stopper, but taking the extra time with the granita would have made making the mimosas much easier.Raspberry Mimosa Cocktail
Hungry PinnerPin, Cook, Eat, Review