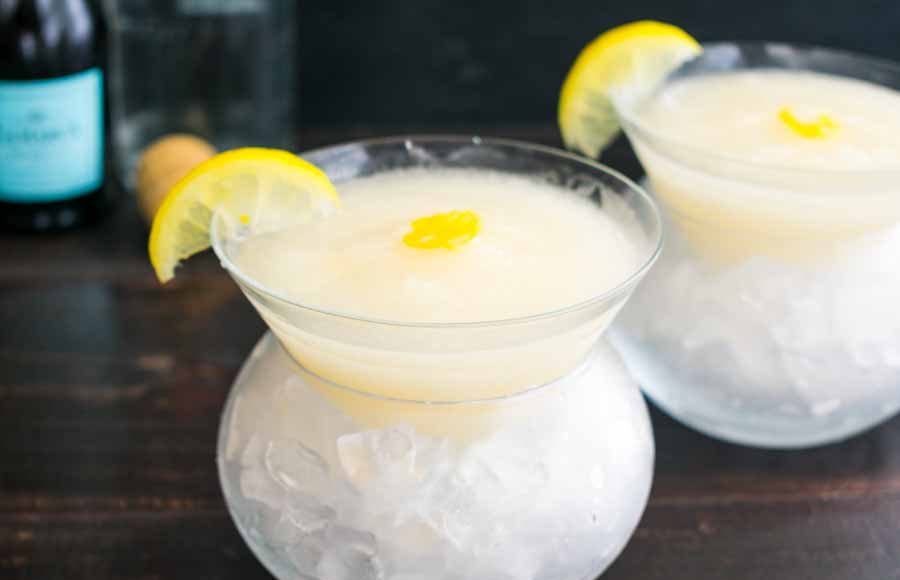 Do you know what? I’m still in the mood for lemon, even after that amazing Pappardelle al Limone I just made. Lemon is so versatile that I had trouble narrowing down which recipe to try. I was thinking a dessert would be nice, then I started thinking I should try a beverage. I’ve had my eye on this Sgroppino al Limone recipe for ages, and I’m finally going to give it a try. It actually checks both the dessert box and the beverage box, so it’s perfect for this week!

I had some shopping to do for this recipe, but nothing too major. I had soda water and vodka on hand (always), so that left me to pick up the prosecco and lemon sorbet. Both were available at my local grocery store, with the sorbet around $6 and the prosecco $18.99 for a 3-pack of the small bottles. This recipe doesn’t call for a lot of prosecco, so I didn’t want to waste a whole bottle and have it go to waste. These minis were a great solution to that problem!

First up was softening the sorbet. I did that by moving it to the refrigerator for 30 minutes before I planned to make the Sgroppino al Limone. I put the glasses into the freezer at the same time.

Mixing up the Sgroppino al Limone was as easy as the directions made it sound. Simply add the sorbet, prosecco, and vodka to a mixing bowl and whisk to mix. Then pour into the chilled glasses, top with lemon zest, and serve. I had mine done in just 6 minutes.

The ingredients did begin to separate after a few minutes, but it wasn’t all that noticeable in the martini chillers I used. Plus filling the bottoms with crushed ice helped keep the Sgroppino al Limone cold while I sipped it. Oh, and in case you’re wondering, the drinks weren’t very thick. I had no trouble sipping them without a straw.

Load more
Think of this Sgroppino al Limone as a lemony cross between a cocktail and dessert. It's sweet and tart with just a hint of prosecco. The vodka isn't apparent at all, so sip with caution! Mixing up this cocktail-dessert hybrid was quick and simple, and I had it done in 6 minutes. Just be sure to soften the sorbet by moving to the refrigerator 30 minutes before you plan to serve. No lemon zest? You could really leave it out. I used it as a garnish and removed it before drinking. The sorbet was so lemony that I didn't miss the lemon zest.Sgroppino al Limone
Hungry PinnerPin, Cook, Eat, Review