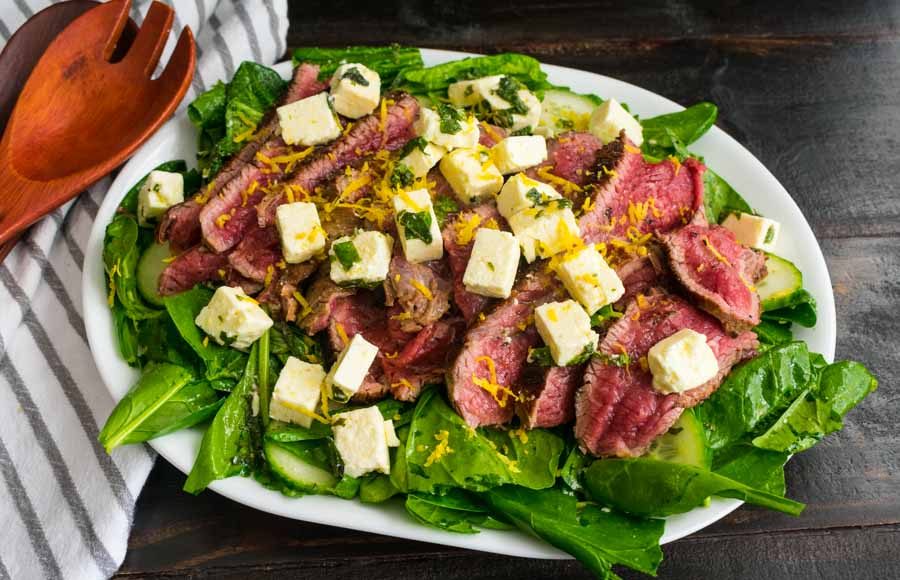 I’m always looking for healthy recipes, and I’ve started to incorporate more salads into my diet. And I mean the green kind, not pasta, potato, or indulgent dessert salads. I’ve never been a big (green) salad person because I don’t find them to be filling. However, I’m finding they can be when a lean protein is added. Then it’s more like an all-in-one meal instead of cooking meat with a side dish. That sure makes menu planning and grocery shopping easier! And that brings me to this week’s recipe: Steak and Feta Salad. Lots of greens, fresh herbs, marinated feta cheese, and thinly sliced beef to top it off. It sounds spectacular! And I’m doing something I never thought I would–craving a salad.

Marinated feta makes this salad something special. Flavorful flank steak has a lot more going for it than just protein. It’s also high in selenium, zinc, and niacin.

Recipe Author: Adam Hickman at Health
Get the recipe

Most of the ingredients I needed for this recipe weren’t too difficult to find with the exception of the flank steak and baby spinach. I tried three different grocery stores and ended up with a 1.54-pound tri-tip steak. It’s close in taste, texture, and thickness to a flank steak. It’s also a half-pound more than the recipe calls for. I’m going to cook up the whole thing and use 3/4 of it for this recipe. The leftovers will become sandwiches.

By the way, other substitutes for flank steak are hangar steak and skirt steak. They’re similar in texture and taste but much thinner. Cooking time would need to be adjusted down for these cuts since they cook faster.

Baby spinach wasn’t available either, so I bought a bunch of regular spinach (Adult spinach? Mature spinach?). Baby spinach would have been preferable since it’s pre-washed, doesn’t need to be stemmed, and has a milder flavor. But stemming the spinach only took a few extra minutes, and I’m sure the stronger flavor will be fine considering the rest of this salad’s ingredients.

Putting this salad together wasn’t too difficult, but I did have to make a couple of changes since I substituted ingredients. That added an extra 10 minutes to the prep time, and the entire process took me 40 minutes.

I started by marinating the feta cheese, then I cooked the steak while it was marinating. Once the steak was cooking, I got to work prepping and assembling the salad.

The first change I made was cooking the steak a little longer and in a larger pan. The cut I bought was 1.54 pounds, and the recipe calls for 1 pound. I cooked for 4 minutes per side instead of 3 and in a 12-inch cast-iron pan instead of a 10-inch pan. The steak was still quite rare at the thickest part, but I was perfectly happy with it cooked that way.

Even with those changes, the entire process went quite smoothly. I ended up with a lovely salad that my husband and I both loved.

Load more
Steak and Feta SaladThis Steak and Feta Salad is a harmonious blend of tastes and textures. The steak, basil, and feta are at the forefront, supported by the cucumber, spinach, and feta marinade/dressing. I loved the mix of crunchy, creamy, and chewy. Best of all, it was a filling and satisfying meal. The only change I would make is in the cut of steak. The cut I used produced very wide, long strips of steak. They were several mouthfuls and a bit much for a salad. Either taking the time to cut up the steak into smaller pieces or using a thinner cut like skirt steak would solve that problem. I did have to substitute a couple of ingredients, and that added to the preparation and cooking times. Still, this was a quick and easy meal that my husband and I loved.
Hungry PinnerPin, Cook, Eat, Review