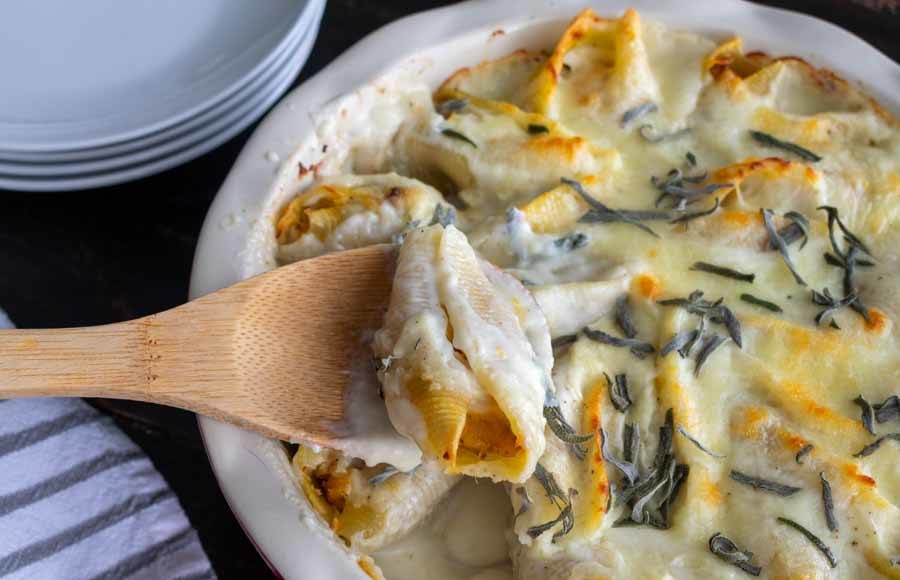 I made stuffed shells for the first time a while back, and I’ve been looking forward to trying them again. Those Cheeseburger stuffed Shells were so good! This time around I’m going with a vegetarian option that seems to fit the season: Butternut Squash Stuffed Shells. And this recipe sounds crazy good. Pasta, cheese, creamy sauce, and butternut squash. You better believe I can’t wait to try this comfort food that seems to have been made for the Fall!

Get ready to see something messy. These butternut squash stuffed shells are tops.

Recipe Author: Jessica at How Sweet Eats
Get the recipe

The list of ingredients for these stuffed shells is on the long side, but it’s mostly basics. In fact, I had most of them on hand. The milk, flour, butter, garlic, nutmeg, and olive oil are all things I usually have in my kitchen. I even had the jumbo shells, mozzarella, and some parmesan leftover from recipes I have made recently.

The parmesan I had was very finely shredded instead of grated, but it worked nicely. I would not have substituted if I bought a fresh package of parmesan unless I couldn’t find grated. But since I had something similar, I used it rather than letting it go to waste.

That left me to buy a whopping a few things: butternut squash, fresh sage, a shallot, and mascarpone cheese. The mascarpone is probably the most “exotic” ingredient in this recipe. If you can’t find it, make a mascarpone cheese substitute out of cream cheese, heavy whipping cream, and sour cream.

These stuffed shells were ah-ma-zing, but I had questions. The recipe isn’t as specific as what I’m used to, and I had to pause and reread a few times before I was sure of what to do next. For example, the butternut squash needs to be cubed before roasting, but the size of the cubes isn’t specified. Maybe I overthought it, but cubes can be a tiny dice to an inch or more. I settled on larger one-inch cubes, and that seemed to work just fine.

Things moved along pretty smoothly once I got the squash into the oven (step 1), but there were long pauses while I waited for them to be done. Step 2 had several actions, and I had them all done well before the squash finished roasting. I was particularly happy about the shells having plenty of time to cool before I had to stuff them. There was even more than enough time to finish prepping all the other ingredients and do some tidying up.

Once I had the roasted butternut squash mashed with the remaining ingredients, it was time to stuff the cooled shells. I used a measuring tablespoon and started with what I estimated to be 1 1/2 tablespoons of puree. That seemed to over-stuff the shells, though, so I switched to 1 tablespoon. That worked a treat, and I didn’t have any extra squash mixture leftover.

My next question came up during the bechamel. The ingredients don’t include the parmesan with it (it’s listed as a topping), but the instructions do. I mixed it into the sauce as instructed, so the only toppings I used were the shredded mozzarella and the sage leaves.

Oh, the sage! There is no instruction given for them, so I took a close look at the picture. It looks like the leaves are slivered, so that’s what I did. I’m pretty sure they aren’t whole unless they are incredibly small.

So I had some questions on the fly, but nothing I couldn’t figure out. This recipe did take a while, so I had time to pause and think when I wasn’t certain about something. Here’s how my time was spent:

Load more
These. Stuffed. Shells. Were. Everything! The cooling Fall weather calls for comfort food, and this recipe delivered. Jumbo pasta shells stuffed with a butternut squash puree and topped with a creamy sauce and plenty of cheese. It was creamy, buttery, savory comfort food, and they were better than I imagined they would be! I did have a few questions as I cooked, but nothing I couldn't figure out. Less experienced cooks might want to give this recipe a thorough read before starting. My total time for this recipe was just over an hour and a half, with plenty of inactive (cooking time). It's not something I would make as a weeknight meal, but I did enjoy spending a leisurely weekend afternoon in the kitchen making it. Butternut Squash Stuffed Shells
Hungry PinnerPin, Cook, Eat, Review