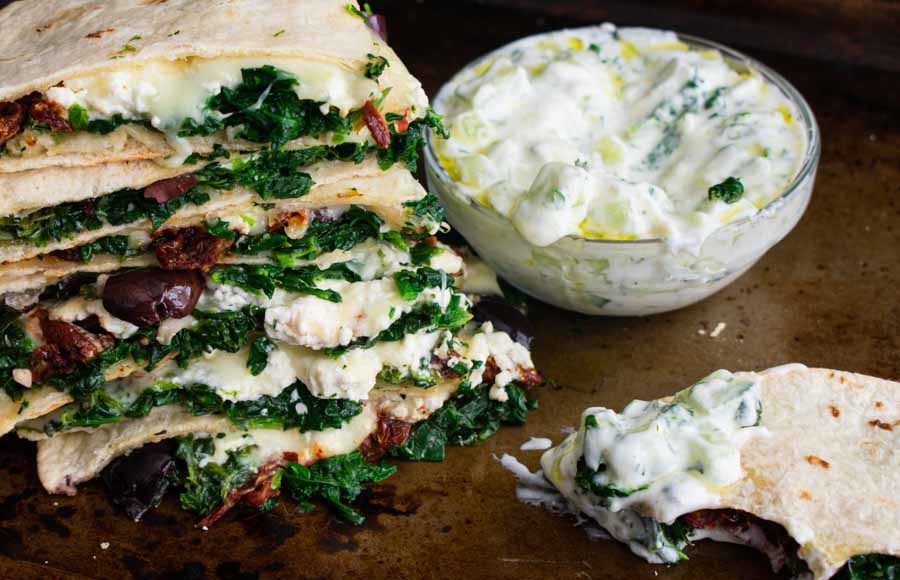 It’s hard to believe I’ve made over 460 recipes for this blog, but I’ve never made quesadillas. Not once! Suer, I’ve made plenty of tacos and burritos, but they just aren’t the same as quesadillas. They’re good, but they don’t have the cheesy goodness of a quesadilla. And they’re not as easy to make if I’m completely honest. Well, not only have I found a recipe for quesadillas to blog, but it’s Greek-Mexican fusion Greek Quesadillas. How’s that for a quesadilla recipe?! So let’s get cooking, I’m excited to introduce quesadillas to my blog!

All the best Greek favors come together in this EPIC cheesy quesadilla, topped with an easy homemade Greek yogurt tzatziki sauce!

Recipe Author: Chungah at Damn Delicious
Get the recipe

This recipe had the flour tortillas you expect, but that’s where the similarities to your typical quesadilla end. These Greek Quesadillas are packed with all kinds of Mediterranean flavors instead.

They start with frozen chopped spinach. I usually prefer fresh ingredients, but I like the convenience of frozen, especially for this. There’s none of the endless rinsing involved with spinach, and I didn’t have to wonder if it would shrivel down to nothing. The package I found was 16-ounces, though, so I had to weigh out 10 ounces after I thawed it. (I saved the leftovers for lunch.)

The other toppings were kalamata olives, feta cheese, and sun-dried tomatoes. I had no problem finding them, but I only found halved tomatoes. I had to julienne them myself. It sounds fancy, but all that meant was taking a few minutes to cut them into thin strips.

Oh, and then there’s the tzatziki sauce to go with these delicious-sounding quesadillas. If you’ve never had it, you should! It’s a yogurt-based sauce with garlic, cucumber, fresh herbs, and lemon. It’s versatile, too, and you can put it on almost anything. I never worry about making too much because we always finish it off. Anyway, onto the cooking!

This recipe is a two-parter: the tzatziki and the quesadillas. While I could have made the tzatziki a day or two ahead (it usually keeps for about a week), I decided to make everything in one go. Here’s how my time was spent:

I actually started this recipe by putting weighing out 10 ounces of frozen spinach. Then I put it into a mesh strainer, placed that on a small mixing bowl, and added some water. I changed the water once while making the tzatziki sauce, and the spinach was ready to go once that was finished.

The tzatziki was easy to make, and I had it done in just a few minutes. This version is a little chunky since the cucumber is finely diced instead of grated. It’s not my favorite way to have it, but I did get to work on my knife technique a little.

Really, making tzatziki is a little chopping and then mixing everything together. This version did surprise me with the addition of lemon zest, but more lemon is usually a good thing as far as I’m concerned.

This part was just as easy as the tzatziki! Just line a couple of sheet pans with parchment paper, add four tortillas, and top with the remaining ingredients. Then place four more tortillas on top and pop the sheet pans into the oven for 10 minutes.

What comes out of the oven is cheesy, crispy goodness! They were a little difficult to cut because they were so hot, and I probably should have waited a few minutes to do that. But I’m impatient, and I made it work. A serrated bread knife was the key to my success. It cut the quesadillas into quarters without shredding them.

Load more
These Greek Quesadillas were amazing! The tortillas got a little crispy, and the filling melted together so nicely. I absolutely loved the combination of flavors. The olives and sun-dried tomatoes popped out at times, and the spinach and cheeses were a great foundation (so much cheese!). The tzatziki was a little more lemony than I'm used to, but I dug it. I did find that I had to spoon it on because it was a little too chunky to use as a dip, though. Next time I think I would grate the cucumber so the tzatziki is smoother. Making everything was incredibly quick, though, and I even finished 10 minutes ahead of the 30 minutes listed. This one is going into my favorites list and will be made again!Greek Quesadillas
Hungry PinnerPin, Cook, Eat, Review