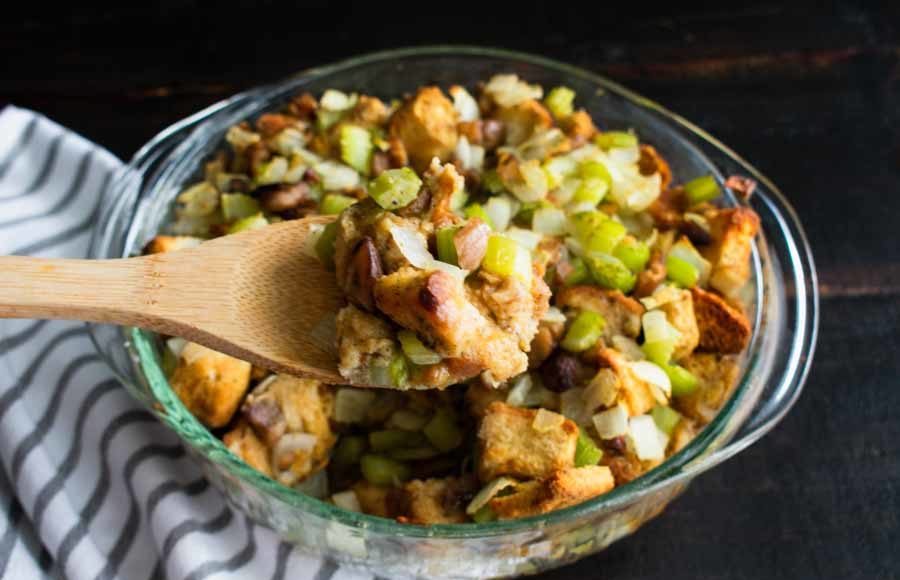 When I found the Mulled Wine Turkey recipe I made earlier this week, I knew I needed a stuffing recipe to go along with it. The accompanying blog post mentioned chestnut stuffing, but I couldn’t find the recipe. No worries, because you can find a recipe for anything on Pinterest! A bit of searching and reading led me to this Old-Fashioned Chestnut Stuffing or Dressing. I suppose it’s dressing in this case since I’m not cooking it inside the turkey. But nevermind the semantics, is it good? I don’t think I’ve ever tried chestnuts, so I have my fingers crossed as I dive into this recipe.

Although this is a type of stuffing I generally associate more with Christmas, I do like to share it with you before Thanksgiving in case you want to have it with your turkey. The chestnuts add a great flavor and it will go perfectly well with poultry such as turkey, chicken, or goose in addition to things like pork and even beef.

Recipe Author: Sue Lau at Palatable Passtime
Get the recipe

Shopping for this recipe took visits to two stores, and it was all the fault of the chestnuts. My regular store had bagged chestnuts, but the recipe calls for them in a jar. I wasn’t sure if the bagged chestnuts were the same since the jarred chestnuts looked like they had liquid in them.

Fortunately, I found them at Doris Italian Market, a local chain with a location in my neighborhood. A 7.4-ounce jar was $12.99. They had better be worth it!

I also had some trouble finding the right amount of croutons. No matter the brand, they only came in 5-ounce bags. I had some bread cubes I made with leftover bread, so I added 3 ounces of those to the store-bought croutons.

Everything else (thankfully) was easy to find, although I didn’t have to look for turkey broth. I had some homemade turkey stock in my freezer, so I used that. If I had to shop it, I’m sure I would have ended up using chicken broth. I’ve never been able to find turkey stock, no matter the time of year.

Making this chestnut stuffing wasn’t difficult at all. It did involve some chopping and sauteeing, though. I used a very large onion and 7 stalks of celery to get 2 cups of each. The jar of chestnuts was the exact size called for in the recipe, so all I needed to do was drain a little water from it before chopping the chestnuts.

Sauteeing the chopped items took about 5 minutes, and I want to stress that you’ll need a large pan for this—you’ll be sauteeing about 5 cups of veggies and chestnuts. Then it was into a large mixing bowl with the remaining ingredients for thorough mixing.

From there it was into a buttered 2-quart casserole dish and into the oven. The times listed were spot on, and I had my nicely browned chestnut stuffing in about an hour. Here’s a breakdown of my time:

Load more
Old-Fashioned Chestnut Stuffing or DressingThis classic dressing did not disappoint! The seasonings were perfect, and the celery, onion, and chestnuts added flavor and texture. The recipe was easy to make and gave me just enough time to let the turkey I made with it rest while the dressing cooked. I did find that there was too much of the celery and onions, though. My first bite tasted like all onions, and my husband and I both ended the meal with a pile of them at the side of our plates. I think next time I would reduce both the onion and celery by 1/3-1/2 so the amount is more balanced with the bread.
Hungry PinnerPin, Cook, Eat, Review