I have wanted to make this olive oil cake ever since I saw it. The author’s pictures are so beautiful! Then I read her blog post and I had to make it. The filling/toppings sounded absolutely decadent. Mascarpone and ricotta cheese, whipped cream, lemon, blackberries, and blueberries. Aaaaahhhhh… However, I’m not the best baker, and I haven’t made a cake in a very long time. Like years. Okay, it’s been more than a decade since my last cake disaster. But those pictures and ingredients… Challenge accepted!

Recipe Author: Florentina at Ciao Florentina
Get the recipe

The list of ingredients for this cake is, unsurprisingly, long. Fortunately, none of the ingredients were difficult to find. I didn’t have to special-order anything or make an extra trip to another store for anything. In fact, I had several of the items on hand, like the sugar, flour, olive oil, vanilla extract, honey, and butter. The fresh berries were a little pricey, but that didn’t surprise me. Frozen blueberries might have worked, but frozen blackberries wouldn’t have been the same. They’re too mushy, and they wouldn’t have made as pretty a topping.

If you’ve taken a look at this recipe, you won’t be surprised when I say it’s pretty involved. I spent a total of 4 hours 35 minutes making, assembling and decorating it. That includes 2 hours for the cake and sauces to cool. It’s probably not something you’ll want to make on a weeknight.

Overall, the instructions were pretty easy to follow. I did notice the order of the ingredients was different from the order the components of the cake need to be made in. That caused me a little bit of confusion as I had to hunt through the list to find the amounts I needed as I was making the olive oil cake and sauces.

I followed the instructions pretty closely and made the cake components in the order they were written with one exception: I decided it would be best to zest all the lemons first thing, and I’m glad I did. I think it made the process go more smoothly. Instead of stopping each time lemon zest was needed, I just had to pick up a dish of zest and add it to the bowl/pan.

Most everything went according to the instructions except for the cake, and that might be my fault. The recipe calls for a 10-inch springform pan, but I only have a 9-inch pan. It was just tall enough to accommodate the cake batter rising in the oven, but I did have to bake it for an extra 10 minutes to get it to firm up (1 hour 10 minutes total). Also, be sure to place your springform pan on a baking sheet. Mine tends to leak a little around the joint, and the baking sheet prevented a mess in my oven.

Another slight departure from the instructions was how I leveled and then halved my cake’s layers. First I leveled the cake since there was a big dip in the center, then I cut it into layers. I pretty much used the method shown in this video with a slight exception. I took a serrated knife and scored the cake all the way around the line created by the toothpicks so the dental floss wouldn’t slip. The knife created a shallow channel for the floss, and I got perfectly even layers of olive oil cake.

Another departure from the instructions was how I made my whipped cream. I don’t have a stand mixer, and my hand mixer was being used. Not a problem except for the fact that I I forgot to make the whipped cream before I started the mascarpone cheese filling it goes into. So I measured out the whipping cream, stirred in the sugar, then poured the mixture into a running food processor. I ended up with very thick whipped cream in just a minute or two.

The instructions for assembling the cake were very easy to follow, and I ended up with a beautiful olive oil cake despite my limited baking skills. However, I did have some difficulty with the mascarpone filling. It’s a very thick mixture that’s spread directly over the much thinner lemon curd (bottom layer) and blueberry sauce (top layer). It took some patience, and I found it was easiest to dab spoonfuls of the mascarpone on the outside edges of the cake and spread it inward, especially over the lemon curd. Next time I think I would use less of the lemon curd–there was a lot.

I also found a helpful suggestion from the author in the comments. Another reader had difficulty keeping the layers from sliding around, so the author suggested using the outer ring edge of the springform pan around the cake layers as it was being assembled, then refrigerating it with the ring in place for a while. That’s the method I used, and it worked like a charm. 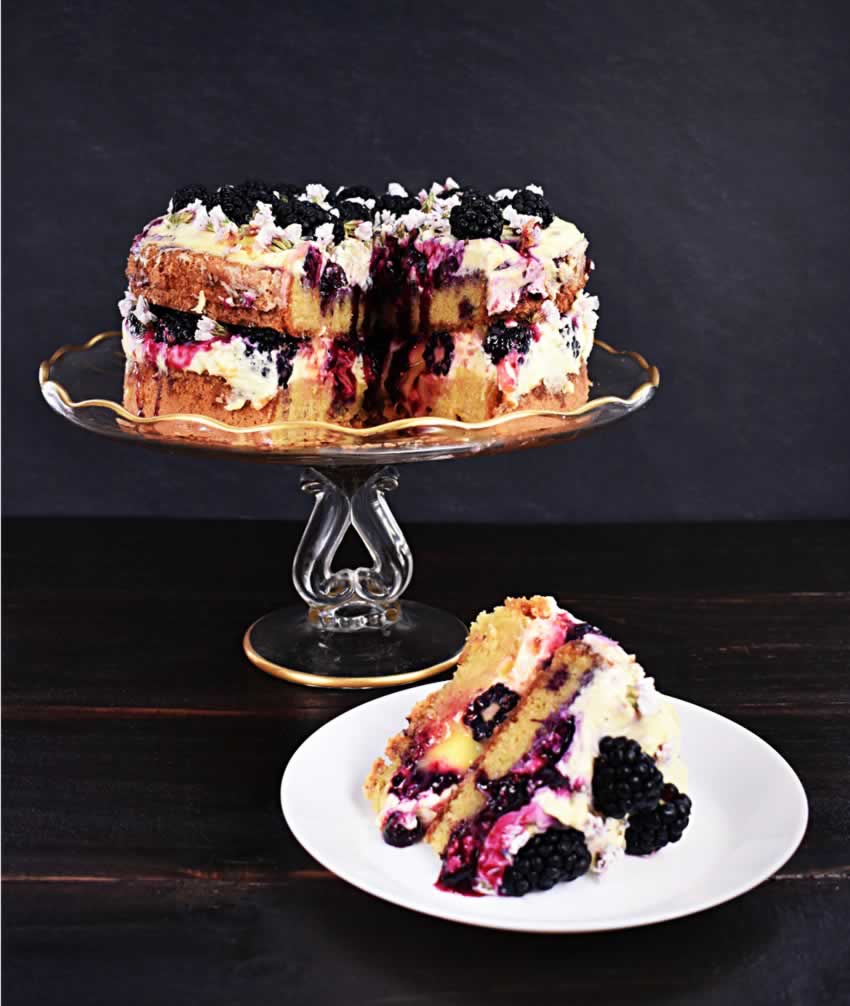 There are quite a few items needed to make this olive oil cake. Most of them are pretty standard, but there are a few specialty items:

I let my cake sit in the refrigerator overnight so the layers could soak up the lemon curd and blueberry sauce. I also removed the baby’s breath flowers I used to decorate it (but not the culinary lavender buds). They didn’t have much of a taste, but I didn’t care for the texture. I bought fresh flowers, but they were a little dry and papery.

Load more
Best Italian Lemon Olive Oil Cake Recipe with BerriesLayers of moist olive oil cake are topped with lemon curd, blueberry-honey sauce, sweet mascarpone cheese filling, and fresh blackberries and blueberries to make a beautifully delicious dessert you'll be proud to show off! It's not a quick and easy recipe, but this one is worth the effort. I'm really not a great baker, but the instructions are easy enough to follow that I was able to create a beautiful cake.
Hungry PinnerPin, Cook, Eat, Review