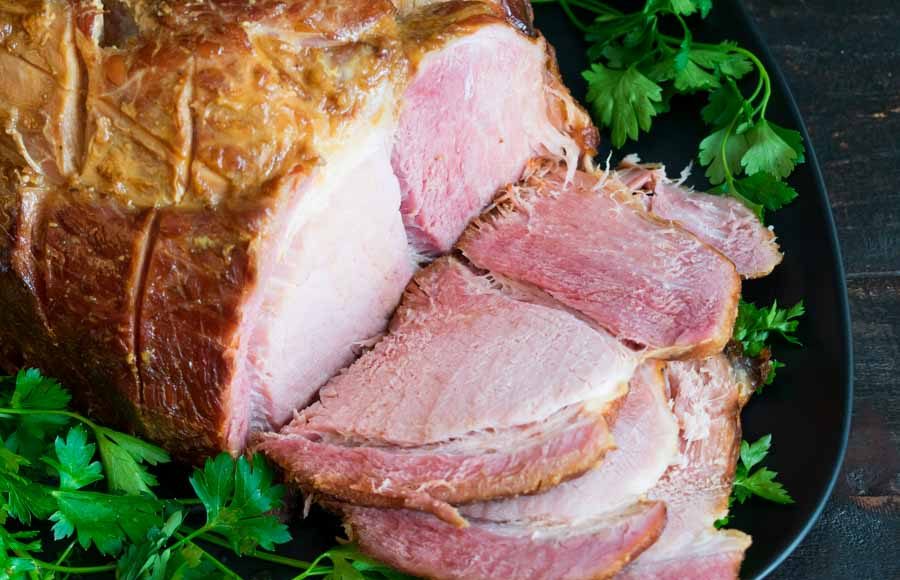 I’ve been seeing crockpot ham recipes on Pinterest for years, and they sound too good to be true. I know cooking a smoked ham is basically reheating it, but that beautifully sticky glazed outside is everything. Getting that in a nice, dry oven isn’t too difficult, but inside a crockpot with a lid on where it’s steaming for a few hours? I just can’t picture it. Well, I can picture all that glaze just sliding off the ham, ending up in the bottom, and basically boiling the bottom of the ham. But all those recipes can’t be wrong, can they? Nah… Well, this Christmas, I’m putting this Crock-Pot Brown Sugar Glazed Ham recipe to the test. It’s from Delish, so surely it will work and taste spectacular. Let’s find out.

Whether you’re cooking for Easter, Christmas, Thanksgiving, or just Saturday night family meal, you can make your main dish—that classic holiday ham—right in your slow cooker! This leaves plenty of room in your oven for sides.

Recipe Author: Lena Abraham at Delish
Get the recipe

Let’s start with the most important part of this recipe: The ham. Apparently the grocery stores in my neighborhood don’t think anyone would need a 4-6 pound spiral ham, so I had to buy one that was a tad bigger. Mine was about 8 pounds and around $30. I kept my fingers crossed the whole way home–I wasn’t sure if it would fit into my crockpot. It was a squeeze, but it just barely fit. Whew!

Next up were the glaze ingredients, and, believe it or not, I actually had every single one of them in my pantry and refrigerator. I did top up my supply of honey and dijon mustard as I was running low, though. I didn’t want to get started and then find out I didn’t have enough!

I can’t say this glazed ham recipe was difficult, but I did run into one snag that was totally unrelated to the recipe. Remember that “spiral ham” I mentioned? Well, it wasn’t spiral cut despite what the label said. This is not something I was expecting to discover when I got up early on a Sunday and opened the package, and I was not a happy camper. But I’m not wasting a $30 ham, so I took a deep breath and got on with the recipe. I’m having ham tonight, damn it!

Besides that little snag, the recipe itself was very easy. The “work” was dumping all the other ingredients besides the ham into a saucepan. Then I let them simmer for 7 minutes while occasionally whisking until smooth.

While that was happening, I scored the outside of the ham and sprayed the inside of my crockpot with cooking oil spray. That helped me squeeze in my slightly too large ham non-spiral ham flat side down. The video shows the ham on its side, but mine didn’t fit with the lid on that way.

Once the glaze was done, all I had to do was dump it on the ham, set the timer on my crockpot, and baste the ham every hour until it was done. Things seemed fine the first couple of bastings, but I noticed there was a lot more juice by the third. I could barely see the glaze/liquid when I started, but the liquid was an inch from the top of the crockpot by the time it was done. My fears were more than realized–I ended up with boiled ham. And while the glaze was tasty, it didn’t create that sticky outside oven roasting does.

Load more
Crock-Pot Brown Sugar Glazed HamWhile this recipe was very easy, and the ham was fall-apart tender, I didn't love it. My biggest disappointment was the appearance--my ham looked nothing like the picture or any other glazed ham I've made. In fact, the glaze and juices from the cooking ham all pooled in the bottom of the crockpot and basically boiled the ham. On top of that, the taste was just okay. The flavor of the glaze was good, but not much stayed on the ham. Serving it with the glaze on the side helped a lot in that department. Still, I just wasn't wowed as I have been with past hams. If you try this recipe, I would recommend adjusting it to cook in the oven instead of the crockpot.
Hungry PinnerPin, Cook, Eat, Review