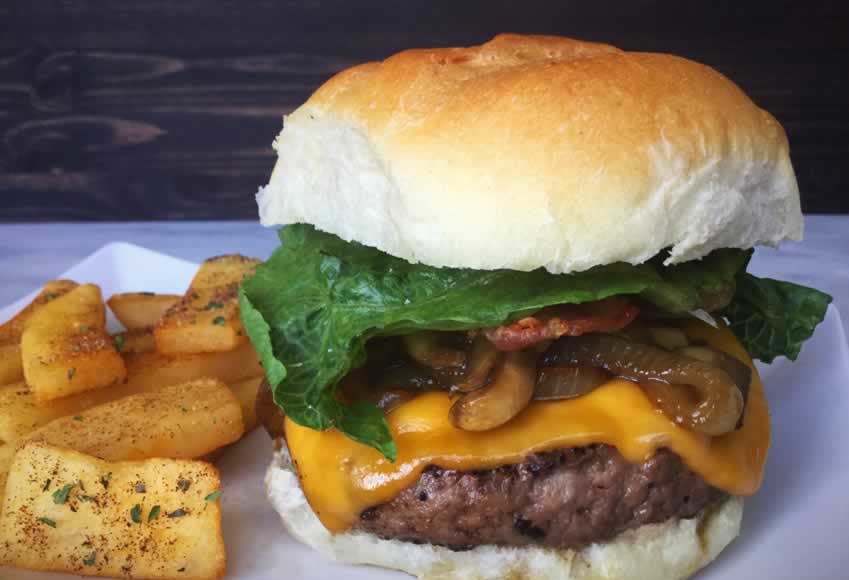 Labor Day is almost here! That means a long weekend and cooking out for us, so off I went to Pinterest to find a burger recipe. These Whiskey Burgers jumped out since it also has whiskey, bacon, and mushrooms. Some of my favorite things!

Recipe Author: Lisa at Cooking with Curls
Get the recipe

You might need to make a stop at the liquor store to pick up some good quality whiskey to make the whiskey glaze. I went with Maker’s Mark since I had a bottle on hand, but I did have to buy most of the other ingredients since they were fresh. I went with pre-made hamburger patties, sliced mushrooms, and fresh hamburger buns from the bakery department.

I made my whiskey glaze the day before I made the burgers. It was extremely easy and took 30 minutes as specified. It stored it in a glass bottle and noticed it thickened a lot as it cooled.

The burgers went together very quickly once I had the bacon cooked. I used pre-sliced mushrooms and pre-made hamburger patties to save some time on prep work. I also was able to put the husband on grill duty while I did the rest. The directions were sectioned into easy to follow steps, and the whole process took us 25 minutes.

Load more
OMG y'all, this burger, OMG! It's so good you don't need any extra toppings (mustard, ketchup, pickles, etc.). The whiskey glaze has a sweet taste that is a beautiful foil for the salty bacon and savory hamburger. We topped ours with a bit of romaine lettuce and mild cheddar cheese. The fresh hamburger buns I used probably helped a little too LOL. Overall, one of the best burgers I've ever had. It will be made again!!Whiskey Burgers
Hungry PinnerPin, Cook, Eat, Review