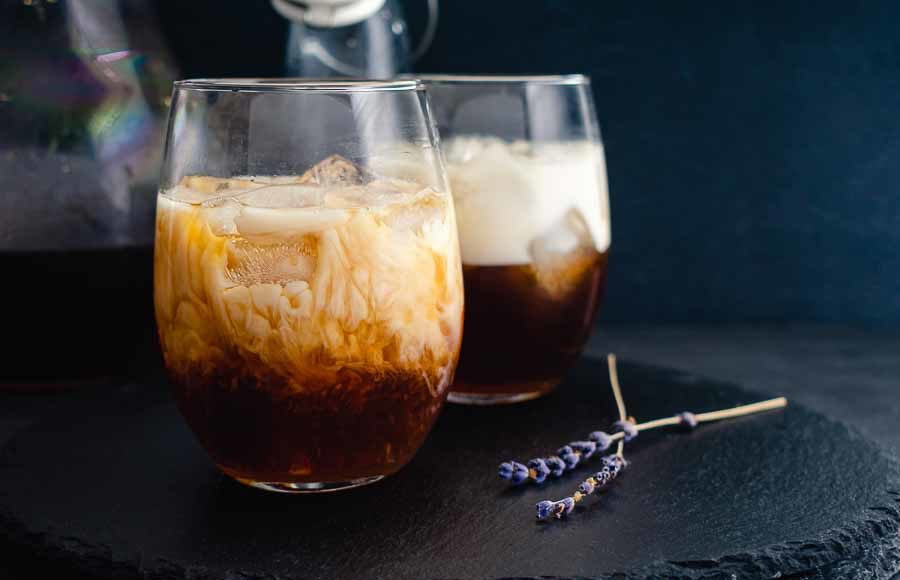 When I worked in the corporate world I drank coffee all day every day. We had a K-cup machine and a single-serving espresso machine in the break room and a barista in the cafe downstairs who would make anything you liked for free. I was in coffee heaven! Now I work at home and found I didn’t need all that caffeine, so coffee became a rare treat. But one day, completely out of the blue, I had a craving and started making iced coffee with my breakfast. It’s become a morning ritual. I have been experimenting with different flavors, but I inevitably got bored with the same old same old and went searching Pinterest for new recipes. This Lavender Cold Brew Latte fits right in with the Honey Lavender Cheesecake I planned to make, and I simply had to give it a try!

Recipe Author: Erin at The Wooden Skillet
Get the recipe

This Lavender Cold Brew Latte recipe recipe does give the option of buying lavender simple syrup and cold brew, but I decided to make both. My food blogger pantry came in handy for this recipe, and all I had to buy was the almond milk. I had whole coffee beans, honey, sugar, and culinary lavender on hand.

I had to make this recipe (or recipes—there were really three) since I decided to make my own cold brew coffee and lavender simple syrup. The latte recipe conveniently links to both recipes (there is even a link to an almond milk recipe, but I bought mine since it’s a household staple for me).

I started with the lavender simple syrup since it was the more complex of the two recipes. At least compared to the cold brew—both are really easy. I put the water on to boil, added sugar and lavender, and stirred until the sugar dissolved. Then I took the saucepan off the heat and let mixture steep and cool for an hour.

I moved onto the cold brew while I waited on the syrup. All I had to do was coarsely grind the coffee beans and add them to a pitcher filled with filtered water. Then I covered it and set it into the refrigerator to brew for 24 hours. Super easy!

Once an hour had passed, I strained the lavender flowers out of the simple syrup with a cocktail strainer and funneled it into an airtight bottle. I popped it into the refrigerator to full chill while the coffee steeped and planned to make a Lavender Cold Brew Latte the next day.

The next day I strained the coffee grounds out of the cold brew. Once using a cheesecloth-lined mesh sieve over a mixing bowl. Next, I used a fine mesh cocktail strainer placed over the mouth of a large pitcher. That gave me perfectly clear cold brew.

Unfortunately, life happened and I wasn’t able to make and photograph my iced latte until a few days later. But no worries! The cold brew and lavender syrup were ready and waiting when I finally found the time for photos.

The actual latte recipe is very simple! Mixed the cold brew, syrup, and some honey in a measuring cup. Tip: Honey has to be stirred very well to get it to dissolve into cold liquid. Then I poured it over ice cubes and added the almond milk.

My first glass is in the background of the main photo. I found that pouring the almond milk slowly made it float on top of the coffee and ice cubes. The latte in the foreground had the almond milk poured from several inches above the rim of the glass. That gave me the pretty swirls I was looking for. Food photographers 🤷🏻‍♀️

I came close to the stated times for all three recipes I made. Here’s how it went with the times listed in parentheses for comparison:

Load more
I have to say I like the lightly floral sweetness of this Lavender Cold Brew Latte. I'm a fan of iced coffee, and I always make it with almond milk. This recipe was a little more watery than what I'm used to. I'm wondering if I caused that by grinding the coffee beans a little too coarsely. The finer the grind, the more surface area comes in contact with the water, and the stronger the brew. Maybe buying the cold brew would have been a better option. The lavender syrup was a breeze to make, as was the latte itself although I did have to stir a lot to get the honey to dissolve into the cold liquid. I loved that I could customize the amounts of everything to suit my taste. My only mild disappointment was I didn't get the beautiful almond milk swirls like the recipe's photo. Otherwise, this was a nice change of pace from my regular iced coffee, and I'm glad I gave it a try.Lavender Cold Brew Latte
Hungry PinnerPin, Cook, Eat, Review