One Pot Cuban Yellow Rice (with Chicken and Sausage) 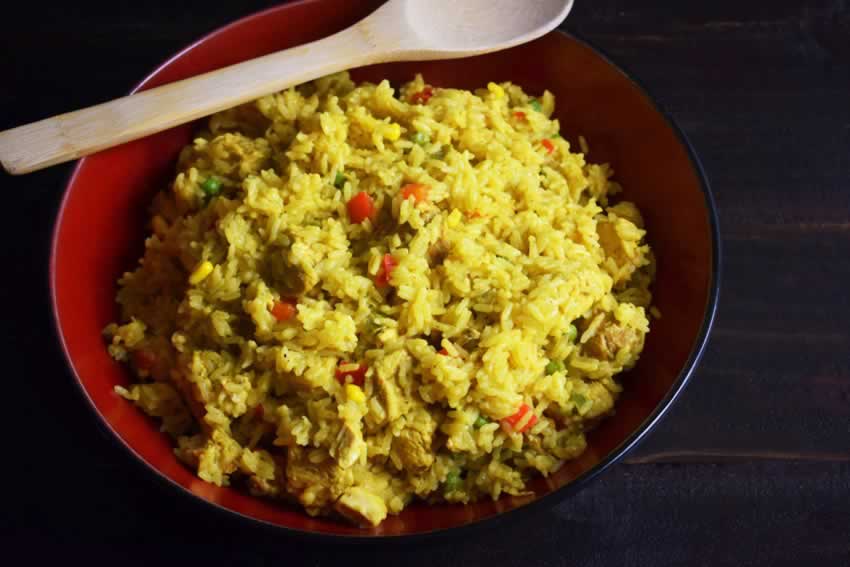 Since this week is all about Cuban food, I simply had to include a Cuban rice recipe. It’s a versatile staple dish that can be prepared many different ways. I like it with green pepper and sausage, and this recipe has both. However, it’s made with turkey sausage, which is something I find unusual. I like that it’s a little healthier than pork sausage, so I figured I’d see if it tastes as good.

A flavorful one skillet rice dish, packed with chicken and sausage and other amazing ingredients. The perfect dish your family would love.

Recipe Author: Renz at Home Made Zagat
Get the recipe

The list of ingredients for this Cuban rice recipe is medium length, but nothing was expensive or difficult to find. The author recommends using precooked Jennie-O Hot Italian Turkey Sausage but also says uncooked will work. That’s really fortunate because my local grocery store only stocks it uncooked. It worked out fine, but make sure you use a very sharp knife when you cut it because the uncooked sausage is very soft. Also, the casing will fall off most of the pieces. I peeled it off the rest.

This recipe also lists several options for extra vegetables. I opted for red bell pepper since the flavor is pretty mild. One was just enough to make the 1 cup the recipe called for, and it added some color.

Most of the prep work for this recipe is chopping the meats and vegetables. I used my veggie chopper to speed things along. My post for vegan fajitas includes a quick technique to core bell peppers to get them ready for the chopper (steps 1-4). It should help speed things along if you need to chop the peppers the old fashioned way too.

I noticed there was a lot of liquid in the pot after cooking the meats, onion, and green pepper. I think that extra liquid was why my Cuban rice took a little longer to cook. Next time I think adding less of the chicken stock will take care of that issue. It could be poured off, too, but I don’t like that option because that liquid had the meat and vegetable drippings as well as the spices.

The directions were pretty clear and easy to follow, but I did have a couple of questions. the first was how to prep the garlic. It’s not specified, so I minced it. The second question was whether to cook the rice with or without a lid. Some recipes call for the pot to be covered, while others say uncovered. This recipe doesn’t specify covered or uncovered until the very last step. I went with uncovered since there was so much liquid.

Overall, I spent 1 hour and 8 minutes on this recipe. The prep time was 10 minutes (as listed), and the rest was time spent cooking.

Load more
One Pot Cuban Yellow Rice (with Chicken and Sausage)This Cuban rice recipe is simple but packed with flavor and can be served as a meal or as a side (it would be perfect for weekday lunches). The taste of the green pepper and cumin stood out the most, but really all the flavors blended very well. The turkey sausage gave it a little spicy kick that I enjoyed. I love the versatility of this recipe too. You can add almost any extra vegetables, making it an excellent way to use up leftovers from other recipes. The directions could be clearer, but they're still fairly easy to follow.
Hungry PinnerPin, Cook, Eat, Review