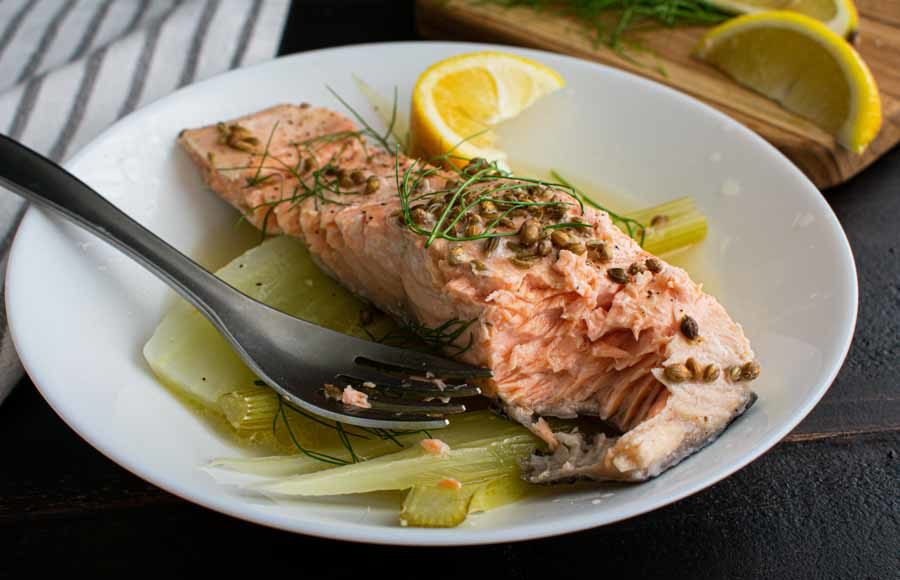 How do you feel about salmon? Personally, I love the stuff! Smoked, fried, baked, poached, and raw—it’s all good. Poaching is my go-to cooking method because it’s so easy. Like no recipe required easy. But I’m always up for trying something new, and this Poached Salmon with Fennel & Lemon sounds delicious, makes a whole meal with side, and uses one pan. It also uses a different poaching technique than my usual method, and that really got me interested. So let’s find out if I can poach salmon as well with a recipe as without.

This poached salmon recipe uses an aromatic broth to infuse the fish with flavor while keeping it moist.

This recipe has a medium length list of ingredients, but it’s really not bad. A lot of the ingredients are spices and seasonings that you might have on hand.

My shopping list was short: salmon, fennel, lemon, and butter. I had the garlic and other seasonings on hand. I even had some leftover pinot grigio in the refrigerator thanks to my Vacu Vin.

As I said, poaching is my go-to cooking method for salmon, but I usually just throw in whatever I have instead of using a recipe. Here’s how I usually do it:

It’s an easy peasy and healthy dinner with a side of veg. This recipe was a change for me, and I had to work to ignore some ingrained habits and actually measure my ingredients.

Prep was easy, with just a little slicing of the fennel and lemon being the most work. It took me all of seven minutes to get everything ready to go.

One thing that did stick out was that the ingredients were added to a cold saute pan, then the pan was placed on the stove to be heated. I’m so used to preheating!

I also tend to put the salmon into the pan skin-side down, and this called for the opposite. This method allowed the herbs and lemon to season the fish better, though. (You can see in the main photo how the coriander and fennel seeds stuck to the salmon.)

Things went okay, but it did take a long time for the liquid to come up to a simmer with the heat set at medium. I tried being patient, but I ended up increasing the heat to high after about seven minutes. I dropped it back down to low once it was gently boiling.

Oops, I Kinda Did it Wrong

Things were going well until I got to the end of Step 1 and transferred the “cooked” salmon to a plate. While the fennel was boiling, I cut into the fish and saw that it was pretty raw in the middle. I don’t mind rare, but this was too rare.

After re-reading the recipe, I saw that I should have cut the salmon into four portions before adding it to the pan. This was far from a disaster, though, and easily fixed with a bit more poaching. Plus the whole salmon fillet made a lovely photo if I do say so myself 🙂

I let the fennel finish cooking and used a slotted spoon to remove it from the pan, leaving in the lemon slices. Then I sliced the salmon into three pieces (my fillet was a little small), brought the liquid back up to a boil, and added the salmon back to the pan to simmer for another five minutes. That did the trick, and my salmon was now cooked as it should have been.

I continued with the recipe as it was written from there, and everything went as expected. I had three lovely servings of salmon and fennel served up in just a few more minutes. Here’s how much time was spent on the entire recipe:

Although I had to add an extra five minutes to the salmon, I finished within the recipe’s 35 minute time. I don’t know how I did it, but I’m happy that I did.

Load more
This simple recipe made such a delicious meal! The salmon was lemony with a little flavor pop from the coriander seeds. It paired so nicely with the crispy sliced fennel and buttery broth. My only regret is not having a loaf of crusty bread to pair with it LOL. Making this recipe was pretty quick and easy despite the fact that I forgot to cut the salmon into pieces before poaching it. Even so, I still managed to make a delicious one-pan meal in about half an hour. This recipe is definitely a keeper!Poached Salmon with Fennel & Lemon
Hungry PinnerPin, Cook, Eat, Review