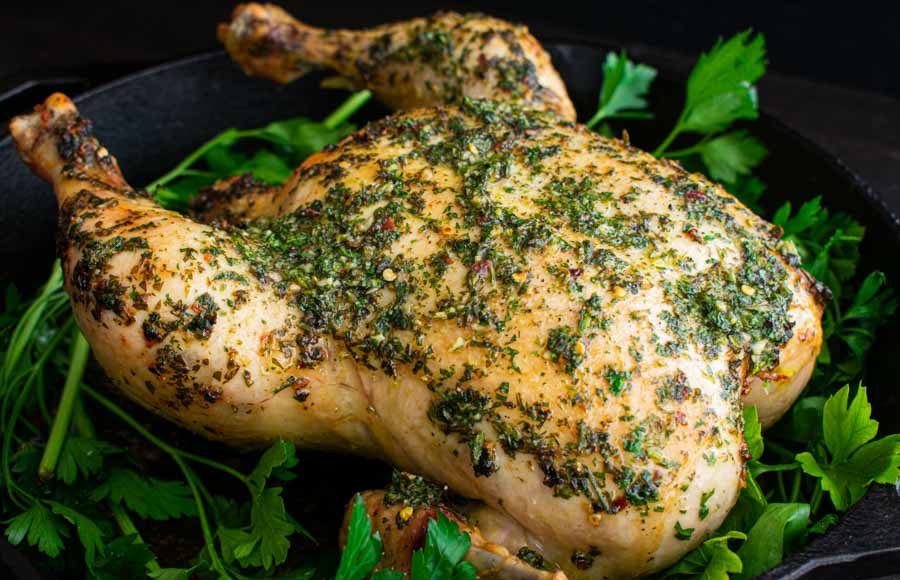 Let’s talk chicken, roasted chicken, that is. I love it! Seriously, roast chicken is such an easy and inexpensive meal. I have several roast chicken recipes I make regularly, but I’m always game to try a new one. And that brings me to this week’s first recipe: Chimichurri Roasted Chicken. I tried Chimichurri Chicken Green Beans Skillet last year, and it was pretty good. But chicken breasts are never as good as a whole roasted chicken in my book. There’s just something about that slow cooking with the bones in and skin on that makes it more flavorful and juicier than a boneless, skinless chicken breast. Now imagine that with the addition of chimichurri, and you’ll understand why I want to try this recipe.

Awesomesauce. Ha. I’m not usually one for modern slang, but this is one situation where this silly word actually applies, because it really is a sauce that is awesome.

Recipe Author: Lindsay and Taylor at Love & Olive Oil
Get the recipe

This recipe is made up of a few basic ingredients. I had a few things on hand like olive oil, red wine vinegar, and spices. That left me to shop for the fresh ingredients, and my usual grocery store had them all.

The chicken I bought was 4.47 pounds, so slightly larger than the 3-4 pounds listed. It also priced out at $2.99 per pound for a total of $13.37. Not bad when you compare with boneless, skinless chicken breasts that are $6.99+ per pound. Even when you account for the waste (bones and skin) with a whole chicken, it’s still a good deal.

Oh, and the chicken’s wings were tucked when I took it out of the package. I left them tucked and thought about tieing the legs. I decided not to, but it’s always an option if you prefer a neater presentation. 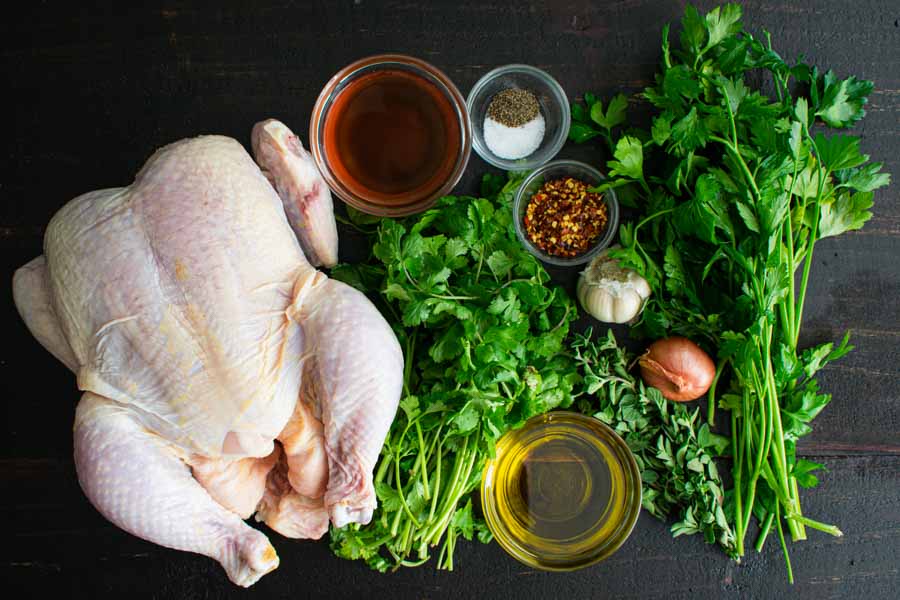 I’m all about my cast iron pans, and this recipe used a new cast iron cooking technique for me: preheating the pan with the oven. I always keep my 12-inch cast iron pan on my stove so it’s ready to go. It has two handles which make it perfect for moving in and out of the oven.

After that, I got to try out my new food processor for the first time (finally!). The chimichurri isn’t complicated, but you do need a large food processor to fit all of the ingredients. A mini-prep just won’t do in this case.

After a quick zip through the food processor, I was ready to prep the chicken. I gave it a quick rinse, patted it dry, and placed it on a clean cutting board. Yes, I rinse my chicken (and other meat), but I am very careful to keep the water on a low setting so it doesn’t spatter across my kitchen. I just can’t not rinse it!

With my chicken prepped, it was time to season it with the chimichurri. I used a combination of a spoon and rubbing with my bare hands to coat as much of the bird as possible.

Do be careful here because I almost made the mistake of dipping my spoon back into the food processor after it had touched raw chicken. Yuck! Pour what you plan to put on the chicken into a small bowl to keep things sanitary. Actually, you’ll need to add more chimichurri later in the cooking process, so have two small bowls ready.

The rest of the process was really just waiting for the meat thermometer to reach 165℉. I did add a touch more chimichurri after 45 minutes, but I still had plenty left to serve with the chicken.

Here’s how my time was spent on this recipe:

That’s just 5 more minutes than the 1-hour total time listed on the recipe. I expected it to take longer since my chicken was half a pound larger than the recipe called for, so I’m quite happy with this time.

Load more
Chimichurri Roasted ChickenThis Argentine twist on classic roast chicken is wonderful! The chicken was incredibly juicy, and the garlicky chimichurri sauce really amped up the flavor. I was very pleased that there aren't a ton of ingredients, and everything I needed was easy to find. the instructions were clear and easy to follow, making this recipe a pleasure to cook. The result was a ridiculously tender and juicy chicken that practically fell off the bone. My husband and I were divided on the chimichurri sauce, though. I thought it could have used just a touch more vinegar and maybe chili flakes, but he was very happy with it. All in all, this was a great meal that was ready in about an hour.
Hungry PinnerPin, Cook, Eat, Review