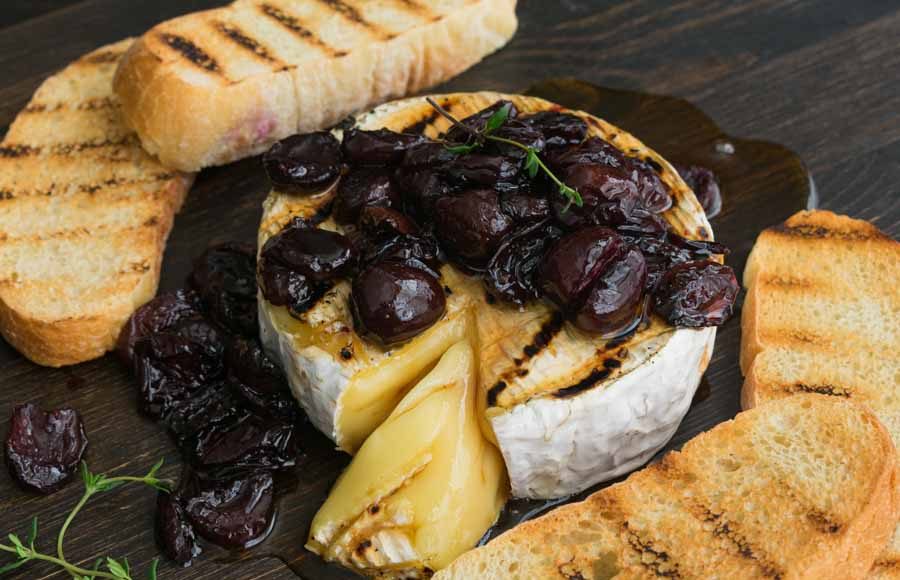 Brie is my all-time favorite type of cheese. And it’s creamy and delicious, and it seems more indulgent than it actually is. I know, that surprised me too. Brie cheese has a higher water content than hard cheeses, so it’s actually lower in fat than, say, cheddar. It’s also lower in carbs if that’s a consideration for you. Still, I don’t have it often (I should!), so this is a real treat for me. It also continues my recent cherry binge. They’re full of antioxidants, so feel free to binge on them! That brings me to this week’s recipe for Honey Thyme and Sweet Cherry Grilled Brie. I don’t usually make appetizer recipe, but with all the delicious things in the title alone, I simply couldn’t pass this up. So enough talk; let’s get cooking!

Recipe Author: Tieghan at Half Baked Harvest
Get the recipe

The brie cheese can vary greatly depending on the brand. I bought an 8-ounce wheel for $8. That’s definitely on the low end, though, and I’ve seen brie go as high as $27.99 per pound. My advice is to buy what’s in your budget. I’ve certainly never had an issue with the $8 brie.

I had the bourbon on hand, but I did use different brands each time I made this recipe (more on that in the next section). Jim Beam Devil’s Cut for the first and Knob Creek for the second. I drink both brands and have only good things to say about them. I’m also a fan of Wild Turkey. If you’re not a bourbon drinker, omit it or buy a mini.

So I went into this recipe thinking it would be a breeze, and I would end up with gorgeous pictures of a super-tasty appetizer. Then life happened. I made a big mistake on my first go at this baked brie: I let the brie warm up to room temperature before I grilled it.

As you can see below, the whole thing just melted into a puddle. I swear I didn’t break it or overheat my grill pan. But the cheese was so warm by the time it hit the pan that it was oozing after 2 minutes. I was barely able to flip it, let alone get it out of the pan and onto my carving board. Don’t even ask me about cleaning the pan.

So the big lesson is not to take the brie out of the refrigerator until you are ready to grill it. Serving a puddle of brie on a carving board surrounded with toasted ciabatta bread and calling it rustic doesn’t fool anyone. It’s delicious, but it’s still a puddle of cheese and cherries.

My second try at grilled brie ended in the main picture of this post. Success! The only thing I changed was not allowing the brie to warm to room temperature before I grilled it. I literally left it in the refrigerator until my grill pan was warmed and ready to go.

I grilled the chilled brie for 2 minutes per side this time. It was enough to add the grill marks and get the cheese somewhere between softened and melted. I liked the consistency—it was soft enough to spread without falling apart. In other words, perfection!

Oh, and about the bourbon. I used 2 tablespoons in my first attempt and only 1 in my second, and I have to say that I preferred a single tablespoon. I know, shocking as I am a bourbon fan!

Load more
Honey Thyme and Sweet Cherry Grilled BrieThis grilled brie is just the kind of combo I like: sweet, salty, and savory. All that in melted cheese form with toasted bread and I'm in heaven! The sweetness of the honey was the first taste I noticed. Once that faded, I was able to pick out the savory thyme and tart cherries, long with the salty/savory brie cheese. Although my first attempt wasn't successful, I blame myself for allowing the cheese to warm up to room temperature--something that was not in the instructions. Using the brie straight from my refrigerator yielded the desired results. Please learn from my mistake :)
Hungry PinnerPin, Cook, Eat, Review