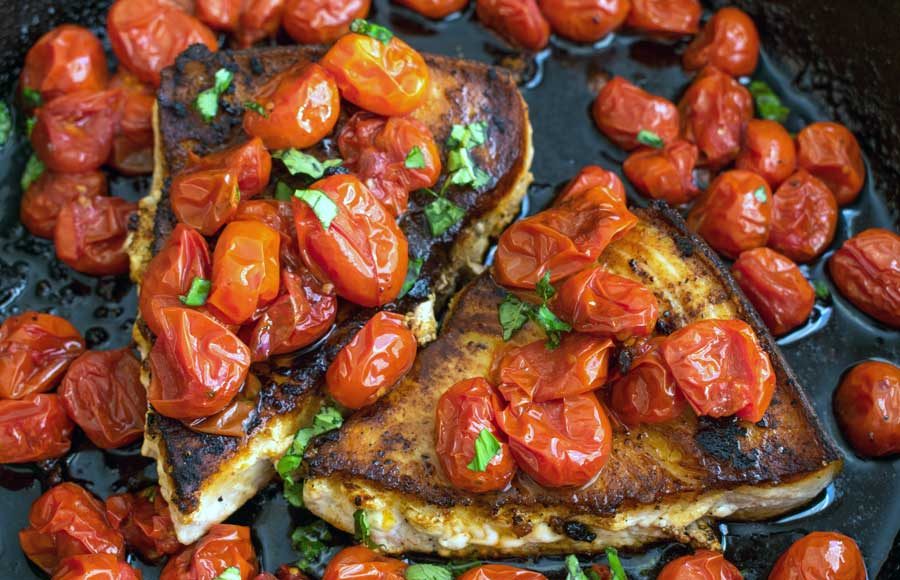 The title One-Pan Sicilian Swordfish with Spicy Olive Oil Poached Tomatoes might have given it away, but this week’s theme is tomatoes, and with that comes a story/confession. Before I started this blog in May 2017, I never used fresh tomatoes in my cooking. I’m not a picky eater by any means but I hate raw tomatoes. Even the smell of them disgusted me! Canned tomatoes were fine, as well as sun-dried and tomato products like ketchup and marinara sauce, but never, ever raw.

Then I found a few recipes that called for the real thing, and I felt I had to suck it up and use fresh tomatoes in order to be honest with my readers. If a recipe called for fresh tomatoes, then I was going to breathe through my mouth when I cut them up and deal with it. Authenticity is very important to me. Soon I found that the smell of raw tomato wasn’t as bad as I imagined it to be. I started slowly with cherry and grape tomatoes, but I’ve even managed to move to their full-sized cousins. I still hate them raw, but cooked fresh tomatoes now have a place in my kitchen. So without further ado, let’s try with some tomato-based recipes, starting with this Sicilian swordfish!

This one-pan fish dish is a true beauty! Everything gets cooked in the same skillet, so at the end of the meal, you’re looking at very minimal clean up. I love that!

Recipe Author: Ashley at Baker by Nature
Get the recipe

I did have to do a bit of shopping for this week’s recipe. Who keeps swordfish fillets around, amirite? I don’t, but I found the lovely specimen during a haul from my favorite fish market. It’s 1 pound, 3 ounces, and I’m going to cut it into 2 generous portions for the hubby and me. He’s never had swordfish, so I’m really looking forward to introducing this unique fish to him.

Besides that, I found a couple of pints of grape tomatoes (guess they were out of cherry), the fresh herbs, and other ingredients during my regular shop. No fancy-schmancy super expensive special-order stuff needed for this meal, even though it’s a bit of a decadent treat for us.

I was so excited to make this recipe! Swordfish is a luxurious treat for me, but I’m pretty sure I always have it grilled with a little lemon and olive oil. Don’t get me wrong, it’s oh so good that way, but I’m always on the lookout for new things like this Sicilian swordfish recipe.

I’m still a bit stunned at how easy this recipe was to prepare. It took me 53 minutes from start to finish. I didn’t break out the prep or cooking times because there really wasn’t any prep. I started by poaching the tomatoes and did the prep work (what little there was) while they were cooking.

Swordfish has a uniquely meaty texture, so it’s not flaky and delicate like most fish. In fact, I found I had to be more careful while stirring the poached tomatoes because their skins started to slide off after a while.

Otherwise, all I had to do was cut the swordfish fillet into two pieces, measure some ingredients, and stir occasionally. I used my cast iron pan because it could go from stovetop to oven and was guaranteed to sear the fish nicely. It didn’t let me down! I ended up with seared swordfish fillets that were a little crisp on the outside and juicy on the inside.

Load more
One-Pan Sicilian Swordfish with Spicy Olive Oil Poached TomatoesMost of the swordfish recipe I've come across on Pinterest involve lemon and grilling. Not that there's anything wrong with that, but I wanted to try something new. One-Pan Sicilian Swordfish with Spicy Olive Oil Poached Tomatoes didn't let me down. This remarkably simple recipe is made indoors using the stove and oven. Poaching tomatoes (grape in this case) in olive oil created a tasty sauce. The meaty swordfish was cooked to perfection with a combination of stovetop searing and baking in the oven. The only thing missing from the finished dish was spiciness. I didn't get even a hint, but I loved the combo of tomatoes, herbs, and swordfish. If you're a spice lover like me, you might need to increase the amount of Tabasco. Otherwise, this recipe was a delicious change I'd make again.
Hungry PinnerPin, Cook, Eat, Review