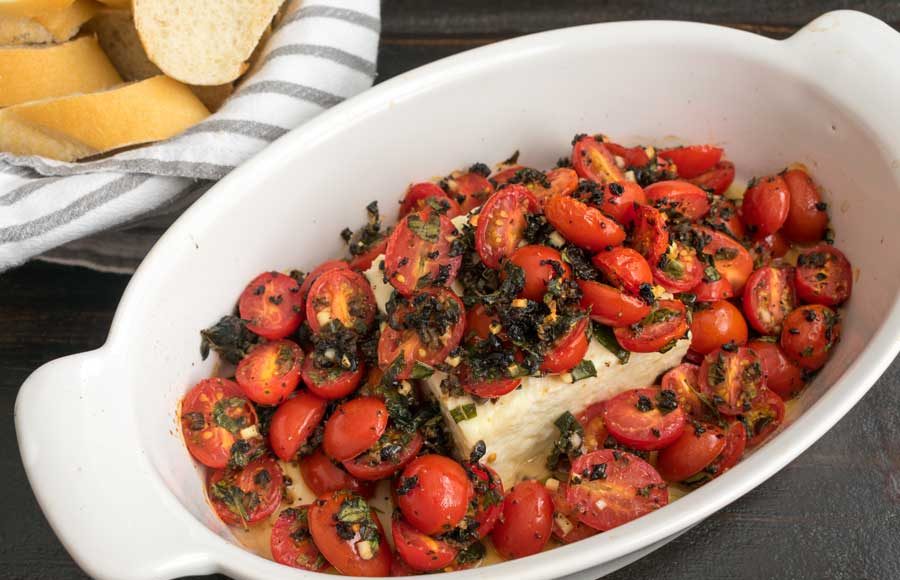 The One-Pan Sicilian Swordfish with Spicy Olive Oil Poached Tomatoes recipe I just made was pretty decadent for me, so how on earth am I going to follow that up? It took me a while to figure it out, but then I stumbled upon this Baked Feta with Cherry Tomatoes and Fresh Herbs recipe, and I had an ah-ha! moment. I’m trying really hard to think of a cheese I don’t like, and I’m coming up with nothing. But baking it somehow makes it special. I guess it’s because it’s not something I ever do for regular meals, just when for holidays or when we have guests. Add to that the fact that I pretty much always have feta cheese cold, and this is extra, extra special.

Recipe Author: Meghan at Cake ‘n Knife
Get the recipe

There weren’t a ton of ingredients in this recipe, but I did have to buy almost all of them. Not a big deal as everything was easy to find on one trip to my local grocery store. Feta cheese is pretty common now, and they stocked a couple of different brands ranging in price from $4 to $8 for an 8-ounce block. I went with the $4 generic feta as I’ve tried it before and know it’s pretty good.

You might have noticed from the ingredients photo that I substituted grape tomatoes for cherry tomatoes. I had to do that on this and the swordfish recipe I just made. I’ve noticed that grape tomatoes are what are normally stocked, and I decided to investigate the difference between the two since I’m a tomato novice.

The reason seems to be that grape tomatoes are a bit hardier than their cherry cousins.  A lot of grocery stores have taken to stocking them as they have a longer shelf life. They aren’t as sweet as cherry tomatoes, but they can be used interchangeably in most cases. I don’t have a super-sensitive palate, and I doubt I would be able to tell the difference. It’s just something I was curious about and wanted to point out in the interest of transparency.

The author describes this recipe as “super simple”, and I have to agree. I took my time slicing the tomatoes and still had it ready in under half an hour. In 29 minutes to be exact. Here’s how my time broke down:

I decided to use the entire pint of grape tomatoes I bought for this recipe so I wouldn’t have any leftovers go to waste. I’m sure it was more than the 1 cup called for (I didn’t measure), so that might have been why my prep took longer than the 5 minutes listed.

Otherwise, the instructions were so easy to follow. A little slicing and chopping were all it took to get the tomatoes and herbs ready to go. Then it was just a matter of pouring the mixture onto the cheese and baking it all for 20 minutes.

The result was a warm, soft block of feta cheese with plenty of roasted tomatoes to enjoy it with. I served it on slices of a sourdough baguette. I even had a little baked feta leftover after the bread was gone, so I reheated it and served it on a baked potato for lunch. It. Was. Epic!

0
These Lemon Cupcakes with Lemon Raspberry Buttercream are delicious and beautiful. Fresh summer berries and lemon are a great combo!

This post may contain affiliate links to products available to purchse through Amazon. These purchases earn a small commission that funds The Hungry Pinner. There is never any additional cost to you.

Blogging my Pinterest recipe reviews. Each week I make a variety of recipes I have pinned and give you all the details so you know if it's a Pinterest success or a Pinterest fail before you try it.
Contact us: [email protected]
© 2017-2020 The Hungry Pinner. All rights reserved.
MORE STORIES
Vegetables

0
Vegan Spanish Beans with Tomatoes makes a tasty meal or a healthy side dish. And it's made with seven ingredients, in one pan, and in under 30 minutes.