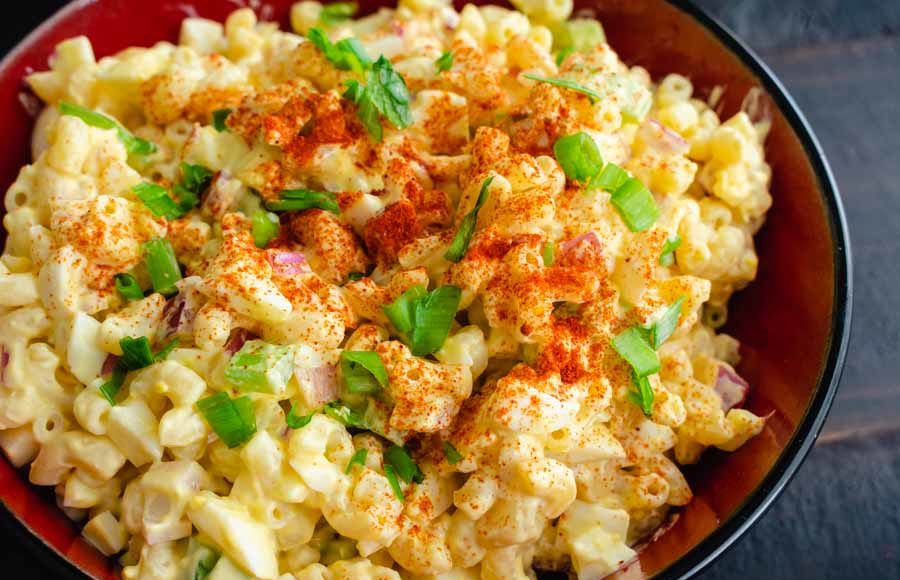 When I decided to make those Chilli and Beer Barbecue Pork Ribs, I knew I needed something to go with them. But what? Well, I just made potato salad, so that was out. Then I stumbled on this Deviled Egg Pasta Salad. Aw yeah! Deviled eggs and pasta salad, but without all the fuss of making deviled eggs? It’s a twofer of summertime classics that are both perfect with cookouts and it’s ready in 20 minutes. Yes, please!

Deviled egg pasta salad with macaroni noodles. Light on the mayo and big on flavor, this dish is a hit at cookouts or summer gatherings! Great way to use leftover hard boiled eggs.

Recipe Author: Kelly at Trial and Eater
Get the recipe

I only had a few things on hand (mayo, salt, and paprika), but the ingredients were all easy-to-find basics.  I can’t imagine a grocery store not stocking them. Mine does, but they happened to be out of chives the day I shopped. I even looked at another store, and they were out too! No worries, though, because the green part of some scallions is a good substitute.

Also, I had to buy a 16-ounce package of macaroni and weigh out the 8 ounces this recipe calls for. I never thought I would have much use for a kitchen scale, but I’m so glad I have it. If you don’t have one, you can always use a measuring cup to figure out how many cups are in a package and halve it that way.

Let me start by telling you I ended up making this salad twice. The first time was good but had a little too much onion for our liking. Still, we both felt it was good enough to try to perfect, so I made it again the next week. Here’s how it went.

The time listed on the recipe is 20 minutes, but it took me 30 minutes on my first attempt. I think the reason was that I didn’t start with hard-boiled eggs. Instead, I put the eggs into my egg cooker while I prepped the rest of the ingredients and began cooking. Once they were done, I had to cool them by running cold water over them.

But I’m getting ahead of myself. I actually started things off by putting a pan of water on the stove to boil. After that, I popped the eggs into the egg cooker and then started all my chopping and measuring.

The macaroni finished right after the prep work, and the eggs just after that. The timing was perfect, and nothing felt rushed. Plus the instructions were easy to follow and involved basic cooking techniques. There was very little (if any) inactive time.

Once the photos were done, I boxed up the salad in a large sealed container and popped it into the fridge to chill overnight. The recipe says to add more mayo or yogurt if the salad dries out, but it was perfectly fine when I served it the next day.

As I mentioned earlier, my husband and I like the Deviled Egg Pasta Salad, but there was just a little too much onion, even after reducing it to half an onion. Still, the leftovers didn’t last long, and I knew I had stumbled on something wonderful.

I decided to try making the salad again the next week with a couple of changes. Reducing the red onion from 1/2 to 1/4 was the main change. The other was using previously hard-boiled eggs instead of cooking them with the rest of the salad. I always keep them around for snacks, so this wasn’t any extra work.

The yolks went into a smaller bowl with the yogurt, mayonnaise, and mustard. I used a fork to crumble the yolks as I mixed everything together, then I added it to the mixing bowl with the rest of the prepped ingredients.

The macaroni was done by then, so I drained it, rinsed it under cold water, and added it to the mixing bowl. Then I sprinkled on some salt, paprika, and chopped green onion and gave it all a thorough mixing (I wasn’t concerned about photos this time). This was the way to do it! It only took me 15 minutes, and we both liked it better.

Load more
I found the perfect summer cookout side dish in this Deviled Egg Pasta Salad! It's a creamy pasta salad with the flavor of deviled eggs, so you get the best of both. The recipe was very easy to follow, but I did have to make some adjustments. Starting with chilled hard-boiled eggs instead of cooking them while making the recipe saved me 15 minutes. Reducing the onion from 1/2 to 1/4 took a good recipe to great by allowing all the other flavors to shine through. My husband kept sneaking onto the kitchen to nibble on it, and it was gone so fast!Deviled Egg Pasta Salad
Hungry PinnerPin, Cook, Eat, Review