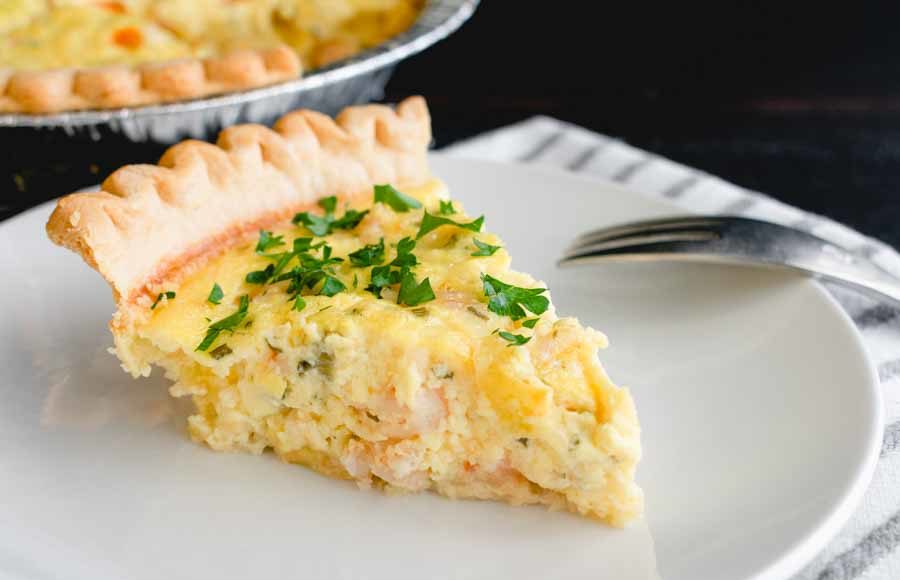 I’ve done some awesome summer recipes this year, but I feel like they were a little on the heavy/rich side. I thought I would lighten things up with this Florida Shrimp Pie. Now, I’m from Florida and have never heard of this, but I’ll roll with it. It sounds like a simple shrimp quiche, and I’ve never made one before. I have come close with this Asparagus and Artichoke Breakfast Casserole (which I highly recommend!), but it didn’t have a crust. So let’s give this quiche-like recipe a try and see how it turns out!

This tasty shrimp and cheese pie makes a perfect light supper, or cut it into smaller wedges for a hearty appetizer.

This recipe is simple, and it only has a few ingredients. I wasn’t able to find the Pillsbury™ Deep Dish Pie Crusts at my usual grocery store, so I ordered from a different one that had it.

The rest of the items were also in stock, but I couldn’t find shredded pepper jack cheese. No biggie, though, because they had a block of it, and I have a box grater that shreds too.

This recipe listed a total of 1 hour 15 minutes, but I had it done a little faster than that:

The night before I planned to serve my Florida Shrimp Pie, I weighed out 12 ounces of frozen shrimp and put them into the refrigerator to thaw in a sealed container.

The next day, I turned on the oven to preheat and set the frozen pie crust out to thaw for 10 minutes as I gathered the other ingredients and began the prep work. I started things off by removing the tails from the shrimp and roughly chopping them. Then I moved on to shredding the pepper jack cheese.

The cream cheese had softened a little by this point, so I measured out 1/2 a cup and added it to my stand mixer to beat until it was smooth and creamy. The pie was thawed by this point, so I pricked the crust with a fork, put it onto a sheet pan, and into the oven for 9 minutes.

Then I began adding the eggs to the cream cheese, making sure each was thoroughly mixed in before adding the next. After that, all I had to do was gently stir in the shredded cheese and chopped shrimp with a wooden spoon.

The crust finished up right after that, so I poured in the filling and put it back into the oven for 35 minutes. When it was ready, I let it cool on a wire rack for 15 minutes, then I cut into it and served it up. Well, I did snap a couple of photos first, but you get the idea.

0
This Coffee Old Fashioned adds a touch of coffee and chocolate to the classic bourbon cocktail. The combo is absolutely delicious!

This post may contain affiliate links to products available to purchse through Amazon. These purchases earn a small commission that funds The Hungry Pinner. There is never any additional cost to you.

Blogging my Pinterest recipe reviews. Each week I make a variety of recipes I have pinned and give you all the details so you know if it's a Pinterest success or a Pinterest fail before you try it.
Contact us: [email protected]
© 2017-2020 The Hungry Pinner. All rights reserved.
MORE STORIES
Meat & Poultry

0
Full of earthy flavors and juicy chicken thighs, this Hungarian Chicken Paprikash must be served over egg noodles so you don't miss a drop of sauce.