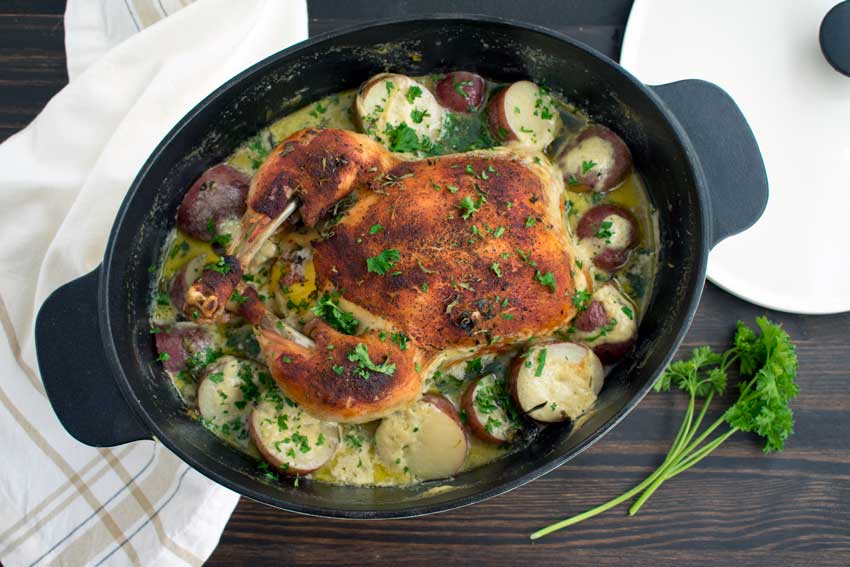 It’s still summer weather in South Florida, but I hear things are turning toward Autumn in other parts of the country. Yes, it’s still in the 90s, rainy, and a hurricane just blew by us, but I’m kind of craving some Autumn/Winter kind of food. This Creamy Lemon and Herb Pot Roasted Chicken recipe sounds like a good way to fulfill that craving without being too heavy. And it’s been a long, long time since I’ve pot-roasted a chicken. Yup, I need to give this recipe a try ASAP. To the grocery store!

This creamy lemon and herb pot roasted chicken is simple to make, decadent, and bursting with fresh flavors. See how easy it is to make chicken in a Dutch oven! You will love this one pot meal.

Recipe Author: Natasha at Salt & Lavender
Get the recipe

The list of ingredients isn’t too long, and I had the dried spices, butter, and wine. That left me to shop for the chicken, cream*, and produce. Most everything I needed to buy was easy to find and reasonably priced. The chicken was the most expensive items at $13.16 for a 4.4-pound bird.

The only thing that was impossible to find was a 10-ounce can of chicken broth. It was either 32-ounces or more. I decided to use bouillon powder instead. I was able to make the exact amount I needed and nothing went to waste.

* One pint of heavy cream is 2 cups, exactly the amount needed for this recipe.

The instructions for this recipe were clear and easy to follow, and making it went very smoothly. In fact, I had the initial prep work done before the oven was preheated. Here’s how my time broke down:

That was right in line with the 1 hour 40 minutes listed on the recipe.

I used a 5.3-quart cast iron pot***, and it had plenty of room for the chicken and potatoes. In fact, I thought it was a little big even after I added the potatoes. Then I opened the oven door after the last 45 minutes and saw how the sauce was boiling almost to the top. It turns out the pot was the perfect size to avoid messy spills.

After 90 minutes in the oven, my meat thermometer read 176℉, so I knew the chicken was thoroughly cooked. I tried to remove the rosemary sprigs, but they fell apart. The chicken pretty much did too, not that I’m complaining. It was so tender and juicy!

** I finished the prep work (Step 3) while the chicken was cooking. It took me 6 minutes.

*** I love my Ikea Senior casserole and use it all the time. It performs like a much more expensive Dutch oven. Ikea does sell it online in case you don’t have one in your area, and I highly recommend it. They also sell it on Amazon, but it’s much more expensive for some reason. Maybe it’s the free shipping? I’m not sure as I bought mine locally.

Load more
You need this chicken recipe in your life, trust me. The chicken is so tender that you don't need a knife. I'm certain I could have carved it with a spoon, and that's not an exaggeration. The potatoes were just as tender, but the sauce, OMG, the sauce! It was creamy, savory goodness. I didn't taste the lemon, but I didn't miss it because everything else was so good. I know the potatoes provide plenty of carbs, but you'll want to serve this dish with some crusty bread to sop up the sauce. I didn't think that far ahead, but I'm already planning to save the leftover sauce and serve it over rice. Creamy Lemon and Herb Pot Roasted Chicken
Hungry PinnerPin, Cook, Eat, Review