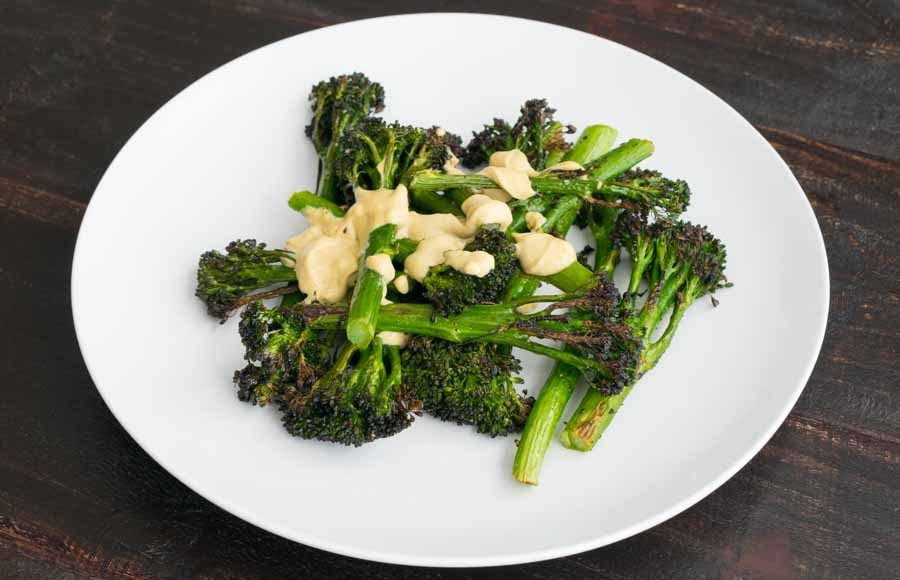 Lately, I’ve noticed a pattern: Each week I’m blogging a main course and either a beverage or a dessert. Sides have disappeared from The Hungry Pinner, and that needs to change. A quick scan of my Pinterest boards and I found this Broccolini with Lemon Tahini Dressing recipe. It’s the perfect follow up to the Lemon Garlic Swordfish I just made. I even thought about serving them together, but it might have been way too much lemon for one meal. So this recipe is going to accompany our weekly red meat, a simple steak in this case. The lemon tahini dressing will be the star of this meal, and for once I’m looking forward to the side dish more than the main course.

The broccolini has a crunchy roast bite. The lemon tahini dressing? I want to top in on EVERYTHING. It’s tangy and creamy. You’re gonna love the tahini up in there. It’s got a hummus vibe but with sesame oil.

Recipe Author: The Oh She Glows Cookbook by Angela Liddon via Shutterbean
Get the recipe

In the vein of the Lemon Garlic Swordfish I just made, this recipe features lemon and only has a handful of ingredients. That food blogger’s pantry came in handy again, and I had most of the ingredients on hand. I just had to buy some extra lemons, the broccolini, and the nutritional yeast.

And let’s talk about nutritional yeast for a second. I had a vague idea of what it was, and I was half right. It’s a nutritional supplement that’s used by vegetarians as a nutritional supplement. I thought I could skip it, but I found out it’s also used as a condiment. It’s known for its nutty taste, so I bought a bottle just for this recipe. At around $6, it was available locally and fairly inexpensive to try.

By the way, I discovered that broccolini has a few other names. The package I bought was labeled broccoletti (and only half a pound). I took a chance and bought it since it looked like broccolini. Worst case I could find a broccoletti recipe to make instead. It turns out that broccolini and broccoletti are the same things. And it’s also called broccolette, sweet baby broccoli, and a few more less common names. Not confusing at all.

I’ve been lucking onto some easy recipes lately, and this Broccolini with Lemon Tahini Dressing is no exception. Talk about an easy side dish! I think it took longer for the oven to heat than it did to do all the prep work.

Getting the broccolini ready took all of 2 minutes. No, that’s not a typo. All I had to do was drizzle it with some olive oil and season with salt and pepper. Then I popped it into the oven for 15 minutes while I made the dressing.

I didn’t time the dressing, but it was fast. All I had to do was measure the ingredients into my mini-prep and blend. I did have some leftover after I drizzled it onto the roasted broccolini, but I also only roasted half the amount called for. I’ll find a use for it–it’s so good!

Load more
Broccolini with Lemon Tahini DressingThis Broccolini with Lemon Tahini Dressing was so quick and easy that I couldn't believe how good it was. A little bit of work had a huge flavor payoff! The broccolini charred a little bit, giving it a crispness and adding a smokey flavor. The lemon tahini dressing was full of garlicky goodness that complimented the roasted broccolini oh so well. Everything took all of 17 minutes from start to finish and I didn't need to do much at all. Just toss the broccolini with some olive oil, sprinkle with salt and pepper, then roast for 15 minutes. While that was happening, I zipped the dressing ingredients through my mini prep, and they were ready long before the timer went off.
Hungry PinnerPin, Cook, Eat, Review