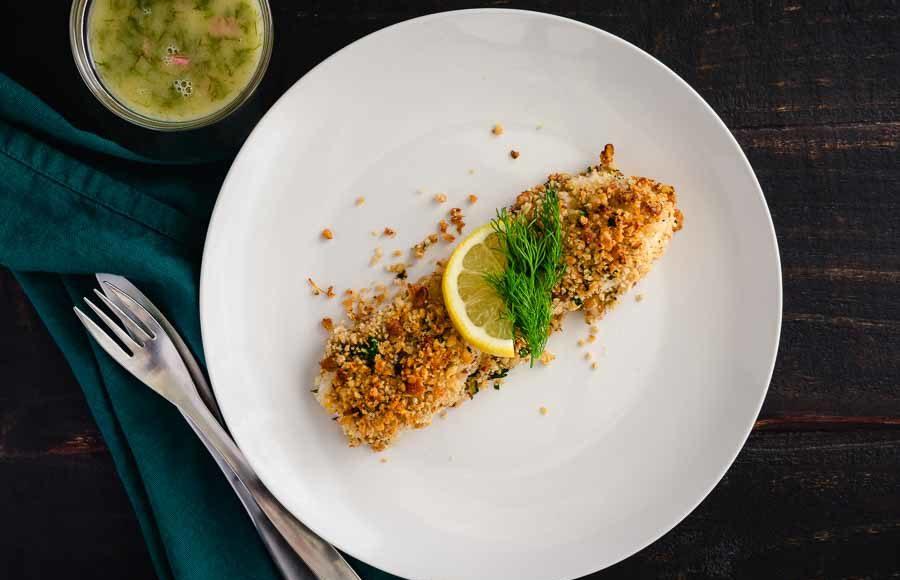 The other day I was shopping for groceries and noticed a lovely halibut fillet for sale. That reminded me that I haven’t tried any fish recipes lately, and I made sure to find one when I got home. My husband was planning a business trip the following week, making it the perfect time to try some foods he doesn’t care for. Well, he’s not big on most fish unless it’s in the form of sushi, so the timing was perfect. I searched the fish section of my seafood recipes board, settled on this Walnut-Crusted Halibut in Lemon Wine Sauce recipe, and started planning for a (hopefully) delicious fish dinner the next week. 😋

How do you turn a mild fish like halibut into a masterpiece? This Walnut-Crusted Halibut does all the work for you, with the fish transformed, topped with a zesty Parmesan and walnut crust and served with a lemon, shallot and white wine sauce.

Recipe Author: Julie Albert & Lisa Gnat at Bite Me More
Get the recipe

When I was ready to shop, I did my pantry/refrigerator review and found that I had several of this recipe’s ingredients on hand. I ended up with a fairly short shopping list for my Walnut-Crusted Halibut in Lemon Wine Sauce. Love that!

Of course, I had to buy the halibut, and I wasn’t about to go with the pre-grated Parmesan stuff for this! A proper wedge of Parmesan cheese was in order. I also needed the wine and produce (parsley, dill, lemons, and shallots).

Then, much to my horror, I discovered they didn’t have the halibut I saw the week before. Oh no! I even tried to find it frozen, and no joy. It made the fact that they were out of flat-leaf parsley seem unimportant.

But no worries, my horror was short-lived. And maybe a touch dramatic! I knew I could try another store later, and that’s exactly what I did the next day. I headed over to the Fresh Market down the street and found fresh halibut fillets on sale for $29.99 per pound. I bought a 0.75-pound fillet for $22.49, enough for 2 servings.

This Walnut-Crusted Halibut in Lemon Wine Sauce recipe is a two-parter: the fish and the sauce. I was able to work on the sauce while the fish was in the oven to speed things along. Here’s how my time was spent:

This recipe doesn’t list a total time, but the cooking times in the instructions were perfect.

The fish fillet I bought was in one large piece with the skin on, so I started off by removing the skin and cutting it in half lengthwise. Then I placed it onto a prepared sheet pan and got started on the walnut crust.

The instructions call for chopped walnuts, but that can get messy. Instead, I placed the walnuts into a ziplock bag and smashed them with the smooth side of a meat mallet. That gave me an almost breadcrumb-like mixture with a few larger chunks, perfect for sticking to the fish.

After some additional measuring, chopping, and shredding, I had the walnut crust mixed up and ready to go onto the fish. I halved the crust ingredients and still had some leftovers after generously covering both fillets. Then it was into the preheated oven for 12 minutes while I worked on the sauce.

I took the time to prep the sauce ingredients before I began cooking. A little chopping, measuring, and juicing was all it took. Then I was softening the chopped shallots in a saucepan. After that, I added the liquids and reduced them, then the butter, and finally the dill with a bit of salt and pepper to taste. That’s it!

The fish did finish baking while I made the sauce, but I just set it aside to cool slightly while I finished the sauce. It was still warm when the sauce was ready, and I enjoyed one of the fillets freshly made before I photographed the other.

Load more
I totally and completely fell in love with this Walnut-Crusted Halibut in Lemon Wine Sauce! The fish was perfectly moist and flaky with a delicious and crunchy walnut crust. And that sauce! It was everything that perfect fish fillet needed--lemony and buttery with a hint of herbs and wine. The recipe didn't list a total time, but I had mine ready in a mere 33 minutes. Plus the directions walked me through the whole process with no WTH moments. Just add a green side, and you have a lovely meal in barely half an hour. I'm counting this one as a huge Pinterest success!Walnut-Crusted Halibut in Lemon Wine Sauce
Hungry PinnerPin, Cook, Eat, Review