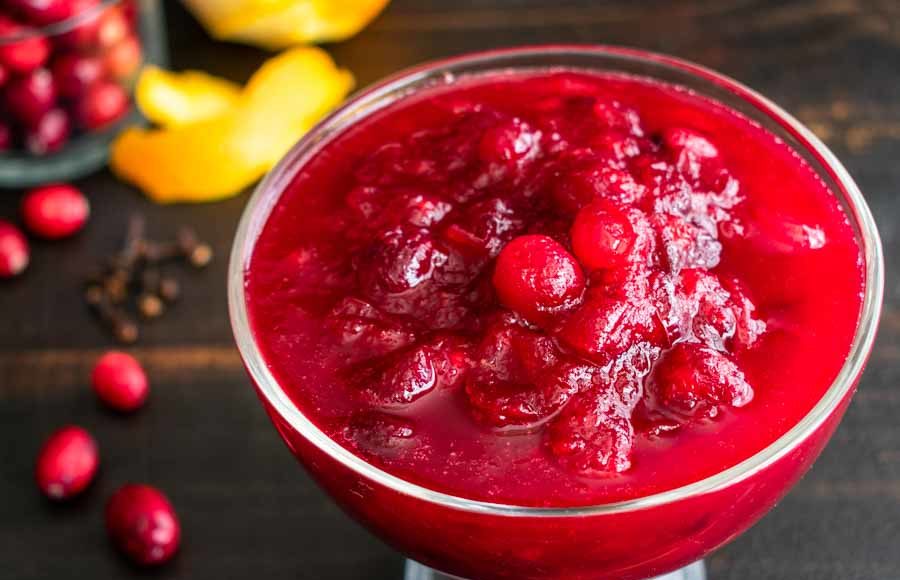 How do you feel about cranberry sauce? My husband loves it, even though he’s only ever had the canned stuff. My family always had a different form of cranberry at Thanksgiving, my grandmom’s cranberry mold, so I never gave it much thought. I don’t recall why it came up, but someone mentioned my father in law loves cranberry sauce, and that sent me searching for a recipe. The canned stuff is alright, but homemade is so much better! I know he also likes a Grand Marnier over ice now and then, so all kinds of lightbulbs went off when I found this Grand Marnier Cranberry Sauce recipe. I’m going to bring it to this year’s dinner just for him. ?

By the way, this cranberry sauce is part of a Thanksgiving menu I have put together, complete with a schedule, grocery list, and equipment list. Read more about it starting with my turkey post where you can also download the menu with schedule and lists.

Jazz up your homemade cranberry sauce with a splash of Grand Marnier! Grand Marnier Cranberry Sauce is a wonderfully-flavorful, nicely-balanced sauce that will be the perfect cranberry accompaniment to your holiday meal.

Recipe Author: Tracey at The Kitchen is My Playground
Get the recipe

The list of ingredients for Grand Marnier Cranberry Sauce is short and sweet, literally! I had to buy everything but the water, but that was no problem.

My first stop was at the liquor store for a bottle of Grand Marnier. This is the priciest item, but you don’t need much. A 50ml mini (around $5) will do if they have it, but the smallest bottle I found was 375mls for $22.99. It will sit on my shelf for a while, but I’ll find something to use it in.

On to the grocery store for everything else! I was really pleased to find 12-ounce bags of cranberries at the store. It’s not unusual not to be able to find the size specified in a recipe, and then I started to wonder if the taste will be affected. I don’t need that stress for Thanksgiving!

One silly thing I did was to buy oranges and a bottle of orange juice. Seriously, I could have just juiced 1-2 oranges for that, but I wasn’t thinking. It’s not that it was a budget-buster, but refrigerator space is at a premium, and I don’t really drink orange juice. I will be this week!

Making cranberry sauce is such an easy thing to do, and this recipe was no exception. It’s pretty much just boiling and stirring the ingredients. And waiting, of course. Here’s how my tie was spent:

To get things started, I added the orange juice, water, and sugar to a saucepan. While I waited for that to boil, I gave the cranberries a quick rinse and cut the strips of orange zest.

The trick with zest strips is making a very shallow cut into the peel. You are trying to get as little of the bitter white pith as possible. All the orange oil goodness is in the orange outer peel. A sharp paring knife is your friend here. And no worries if you mess up on the first couple of tries—there is more than enough peel to perfect your technique.

I added the berries, zest, and three cloves to the pan when the liquid was boiling and the sugar had melted. The sauce can simmer for 10-15 minutes, but mine took only 10. (And this is where I admit I like the sound of popping cranberries—it’s kind of cute!)

After that, I removed the pan from the heat and went hunting for the orange zest strips and cloves. The former was easy to find, but the cloves took me a few minutes of carefully spooning through the cranberry sauce. A small spice bag or a tea infuser would have made this part much easier.

The last part left after the initial cool-down period was to stir in the Grand Marnier and let the sauce cool completely on the countertop. Then it was into a sealed container to chill and thicken overnight. I’ll pull the container out of the refrigerator about two hours before dinner so it can warm up to room temperature.

Load more
This recipe takes cranberry sauce from meh to must have seconds! It has just the right balance of sweet and zingy, and I couldn't get enough of it. Making it was very simple and took just under 30 minutes. It was pretty much boiling and stirring just a few ingredients. I also loved the fact that it can be made ahead of time. I took advantage of that and made up a batch the day before I planned to serve it. Grand Marnier Cranberry Sauce
Hungry PinnerPin, Cook, Eat, Review