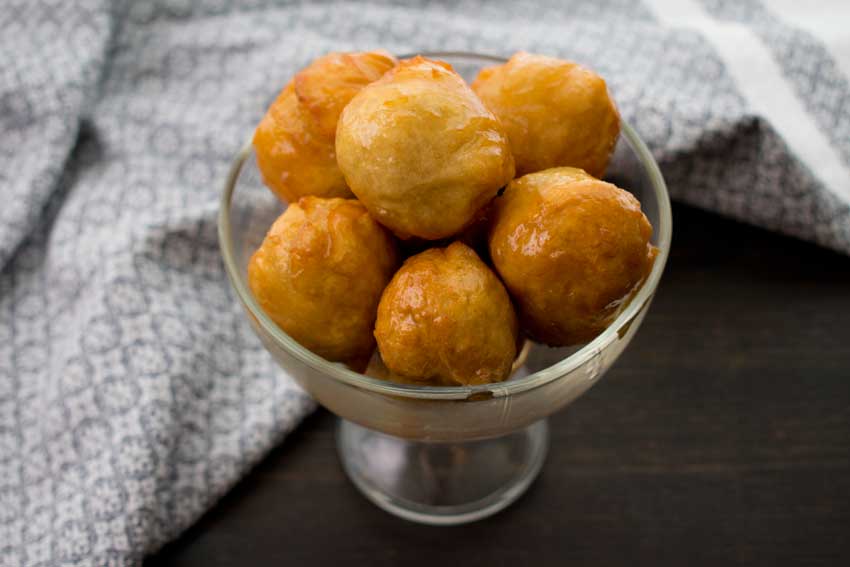 I know I’ve said I’m not a huge fan of fried foods, but I’m still on a mission to challenge myself and try new things in the kitchen. This recipe for Turkish Lokma fulfills both of those mandates and fits in with this week’s Turkish theme. However, unlike the Turkish Gozleme with Minced Lamb I just made, this is an authentic Turkish recipe. It sounds simple and doesn’t have a lot of ingredients. Let’s find out if that means it’s easy too.

Lokma is another traditional Turkish dessert, but the good news is that it’s not as challenging as baklava. It’s one of the easiest dessert with some very simple ingredients. It’s nothing more than fried sweet dough, but I must warn you that it’s addictive! Since these are bite size, you might not realize how many you eat, these taste so darn good!

Recipe Author: Zerrin at Give Recipe
Get the recipe

The list of ingredients for this recipe looks longer than it really is. That’s because some of the ingredients used in the lokma dough are also used in the syrup. Oh, and water is two of those ingredients, so it doesn’t count from a grocery shopping perspective.

I actually had everything needed except for the instant dry yeast. I found packets of active dry yeast at the store, but nothing labeled instant dry yeast. Thank goodness for Google! A quick search and I learned it’s also called bread machine yeast. Problem solved.

My lokma took a total of 1 hour and 42 minutes from start to finish, which was within 3 minutes of the time listed. That includes 1 hour for the dough to rise and 15 minutes to soak in the lemon syrup.

I did have to make the lokma twice, though, as my first batch didn’t turn out well at all. I forgot that my air conditioner was on full blast when I set the dough aside to rise. It didn’t look any bigger after an hour, but I went ahead and fried it. I ended up with dense, undercooked, and definitely not golden clumps of dough.

The second try resulted in the lovely lokma you see pictured. The difference? A couple of things. First, I made sure to have a warm place for the dough to rise. I wet two tea towels, wrung them out, and microwaved them for 45 seconds. Then I moved one to the side of the microwave using tongs and covered the bowl with the other (also using tongs because both towels were hot). Then I closed the lot into my microwave for an hour. After an hour, the dough had risen significantly in the warm oven and felt lighter and airier than the first batch.

Next, I doubled up the sunflower oil so the dough would have plenty of room. Then I dropped 5-6 spoonfuls into the hot oil at a time and fried them until the dough puffed up and turned golden brown. That took about 2 minutes per batch, and I had to turn the dough balls to make sure they cooked evenly.

After letting the fried lokma rest on a paper towel covered wire baking rack, I placed them in a 9'x13' baking dish and poured the lemon syrup over them. I let them soak for 15 minutes, turning them a couple of times to ensure they were all well coated. This batch was exactly what I thought lokma would be: light, non-greasy, and sweet treats.

Load more
This recipe for Turkish lokma has only a few ingredients and was simple to make. The dough quickly fries up to a light golden brown that’s not at all greasy. Briefly soaking it in simple syrup with a subtle lemon flavor takes it from okay to great, and, surprisingly, doesn’t make the lokma soggy at all. I enjoyed it as a dessert, snack, and even breakfast with a mug of coffee.Turkish Lokma
Hungry PinnerPin, Cook, Eat, Review