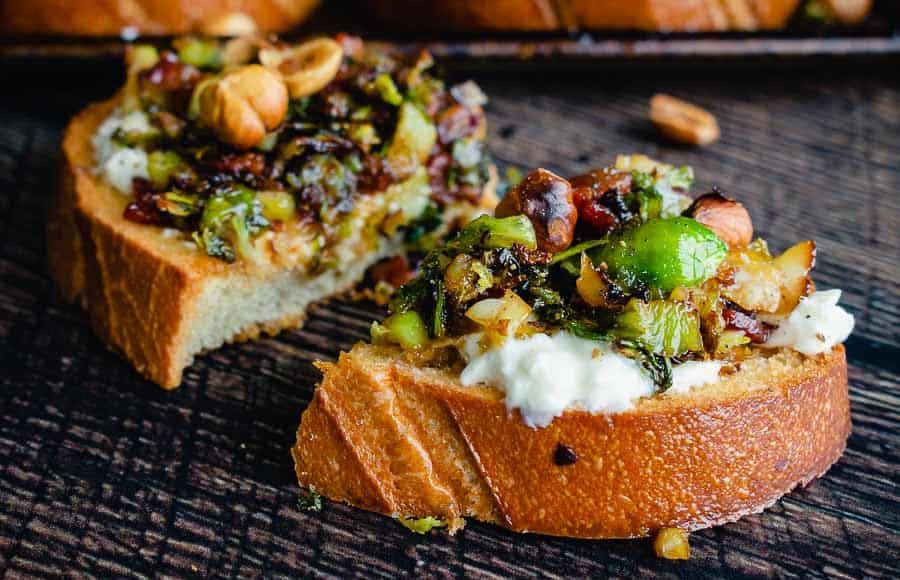 I grew up eating frozen Brussels sprouts. Okay, it was more like tolerating them. I found them very bitter and a little mushy, so I drowned them in butter and salt or cheese to cover the taste. But recently I have noticed Brussels sprouts popping up on restaurant menus and in my Pinterest feed. A few friends have assured me fresh sprouts are delicious, so I have finally decided to give them a try. I have tons of pinned to choose from, but I settled on this Caramelized Brussels Sprout Toast with Burrata & Bacon. I might be unsure of the Brussels sprouts, but I love burrata, bacon, and nice crusty bread. A recipe with all those ingredients has to be good, right? Let’s find out!

Recipe Author: Kayla at The Original Dish
Get the recipe

As usual, I had the basics in my pantry: kosher salt, pepper, olive oil, and honey. I even had the raw hazelnuts left over from the Ferrero Rocher Nutella Tart I made last month.

My usual grocery store had everything I needed to make this Caramelized Brussels Sprout Toast with Burrata & Bacon recipe. I found a container of two burrata balls, a nice loaf of crusty Italian bread from the bakery, lemon, and bacon. Tip: I chose thick-cut bacon because it’s easier to dice.

This recipe doesn’t list prep, cook, or total times, and I didn’t break it down. I was working the whole time, and I worked on this recipe for 51 minutes. I had the stove and oven going while I was doing the prep work—there’s a lot going on here!

I kicked things off with toasting the hazelnuts and rendering the bacon. I finished the rest of the prep work while all that was going on. That meant measuring the other ingredients, zesting and juicing the lemon, and slicing the bread and Brussels sprouts.

The hazelnuts and bacon finished at about the same time. I set the naselnuts aside to cool and used a slotted spoon to remove the bacon from the skillet. Then I added the olive oil and sliced Brussels sprouts and let them caramelize.

I spread them into a thin layer per the instructions and let the skillet do its thing. Meanwhile, I put the cooled hazelnuts into a tea towel and rubbed off the skins. I gave the sprouts a good stir when they began to brown and caramelize.

I sprayed 6 thick slices of bread with olive oil, arranged them on a sheet pan, and put them into the oven to toast while the sprouts caramelized. Twelve minutes in the oven toasted them to golden perfection.

I added the torn burrata when they were done so it could melt onto the warm bread. Then I finished up the Brussels sprouts mixture and added it to the bread with the hazelnuts, additional honey, and fresh black pepper. I didn’t have flake salt on hand, so I used a bit of kosher salt instead. It seemed to work just fine.

Load more
I'm not sure where to start, the taste or the texture. Let's go with taste, which was awesome! these Caramelized Brussels Sprout Toast with Burrata & Bacon were a nice mix of savory, sweet, tart, and salty (respectively). They also had plenty of crunch thanks to the bacon and toasted bread and hazelnuts. I didn't notice the flavor of the burrata, but my husband and I still loved them. The instructions were easy to follow even for a Brussels sprout novice, and I found the cooking times accurate. A total time wasn't listed, but the entire process took me a little under an hour. It seemed like a long time for 6 toasts, but they were worth it. This was my first time cooking fresh Brussels sprouts, but it won't be my last!Caramelized Brussels Sprout Toast with Burrata & Bacon
Hungry PinnerPin, Cook, Eat, Review