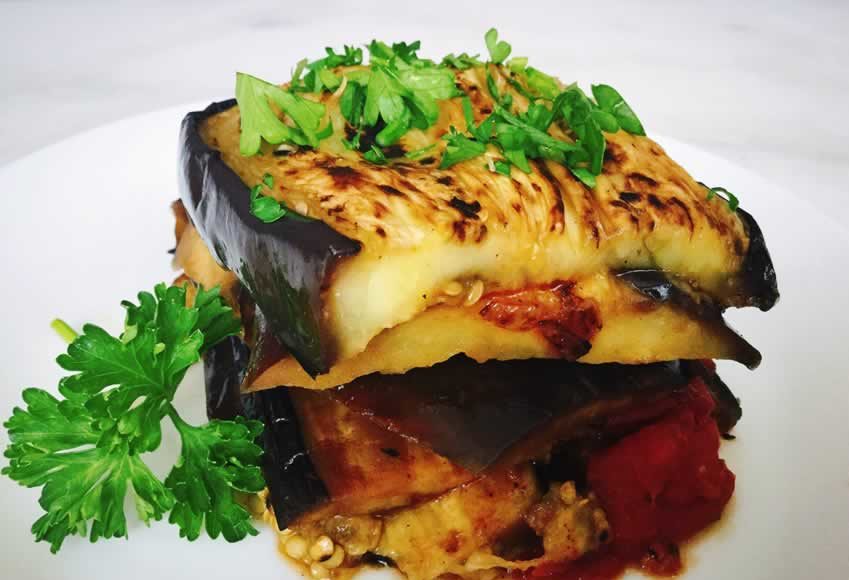 This Turkish eggplant recipe “Imam Bayildi” is a perfect vegetarian weeknight dinner. It’s great for making ahead of time, as the flavors only get better.

Recipe Author: Phoebe at Feed me Phoebe
Get the recipe

The list of ingredients is short at 9 items, and I had everything on hand except the eggplant and fresh parsley. It made for a very short grocery list, my favorite kind!

Salting the eggplant and prepping the rest of the ingredients while that stood took 25 minutes. I’ve read articles that are for and against salting eggplant. The anti-salting articles usually say it’s not necessary if you buy young eggplant. The pro-salting articles say it removes the bitterness. I’m in the pro-salting group. I’ve had good results with my previously mentioned eggplant parmesan recipe using table salt, rinsing it after 20-ish minutes, and patting the eggplant dry with paper towels. I didn’t have those results with this recipe, but I think it was because I used coarse sea salt.

The coarser texture didn’t seem to coat the eggplant as well as finer table salt. I don’t think it did as good of a job drawing out the moisture because the finished dish did have a slightly bitter taste. Not enough to make it taste bad, but it was there. I’ll be making this again but using the finer salt for sure.

As for frying, that part was pretty simple. I used the largest skillet I had (13-inch diameter, stainless steel) and it took me 4 batches to get it all fried. The eggplant didn’t seem that big, but I was only able to fit 3 slices at a time into the pan. I’d say I added about a teaspoon of olive oil in between batches and had no issues with it sticking.

TIP: Use the olive oil sparingly. Eggplant behaves like a sponge and will soak it up.

There were a couple of things I needed to look up since they weren’t specified in the ingredients list or the directions. First was the garlic. It seemed odd to add 2 whole garlic cloves. I found a few other recipes online for imam bayildi that specified mincing, so I minced too.

The canned tomatoes were the next mystery: drained or undrained? The recipes I found used fresh tomatoes, and that almost made me drain them until I read the word “sauce” in the directions (step 5). I decided not to drain them, and I think it worked out well that way.

Lastly, the whole dish took 1 hour 55 minutes to complete. That includes the prep work, salting the eggplant, cooking, and 10 minutes standing time after removing the dish from the oven. It was 35 minutes longer than the time listed on the recipe (1 hour 20 minutes).

As you can see, I used an 8″ x 8″ baking dish. It worked okay, but I didn’t have room for more than 3 slices of eggplant per layer. That meant I ended up using all my sauce between layers and I didn’t have enough to cover the top layer. I don’t think it was an issue since the dish was covered with foil for cooking. The top layer didn’t burn or dry out because of that.

Load more
Imam Bayildi: Turkish Eggplant Casserole with TomatoesThis recipe took a while to make, but it wasn't difficult. I really tasted the garlic and other vegetables because there isn't a lot of seasoning to hide the flavors. They really just enhance what's already delicious. The slight bitterness of the eggplant can be corrected with a more thorough salting, so I'm not bothered by it. The 2 hour prep/cook time is more concerning to me, but the author does say it can be made ahead of time. She's also right about the flavor: it does get better after sitting in the refrigerator overnight.
Hungry PinnerPin, Cook, Eat, Review