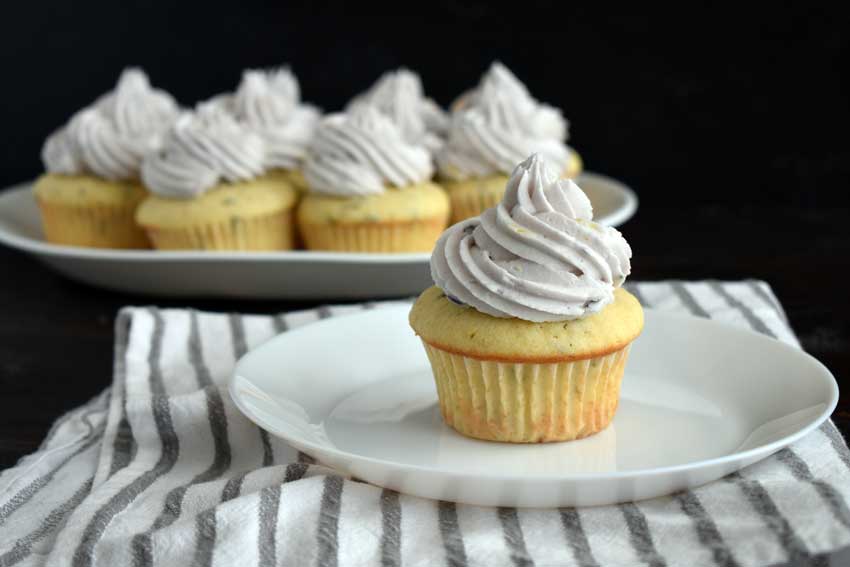 Now that I’ve had my Spring lamb dinner, I need dessert. Well, I don’t need it, but that bag of culinary lavender in my pantry says otherwise. It’s been a while since I made cupcakes, so this recipe for Lemon Lavender Cupcakes needed to be made. I get to use my lavender again and satisfy my sweet tooth at the same time. How perfect?!

I can guarantee that if you made these Lemon Lavender Cupcakes for any spring event or party that they’s be a guaranteed hit!

Recipe Author: Shay at The Brooklyn Cook
Get the recipe

Since I already had culinary lavender on hand, shopping for the rest of the ingredients for this recipe was easy. I really had to stock up on 3 things: lemons, butter, and powdered sugar. I ended up using 7 lemons, 4 sticks of butter (with some leftover), and 6 cups of powdered sugar because I doubled the quantities for the frosting*.

The total time spent on this recipe was 52 minutes. The recipe lists 35 minutes, but that only covers the time to prep and bake the cupcakes. Neither time includes time for the cupcakes to cool, so you will need to allow an hour or more for that.

The cupcakes were very easy to whip up. I had them baking in the oven after 15 minutes of prep work, and they were ready in 20 minutes just as the recipe specified. The frosting took 10 minutes to prep/mix and 7 minutes to apply, but it wasn’t quite as easy as the cupcakes.

Adding the milk changed the crumbly texture to smooth. Whew, was I relieved! I also added 1 drop each of red and blue food coloring to give the frosting a lavender tint (it’s white without it). It took a good amount of mixing, but I ended up with very thick frosting. So thick it was difficult to squeeze it out of the piping bag, but I managed. Next time I will add a little extra milk to thin it a bit, give it a creamier texture, and make it easier to work with.

I doubled the recipe for the frosting. I tend to be generous with it, and it’s faster to double it from the beginning rather than make 2 separate batches. If you double the recipe and want the same lavender tint, you will need to add 2 drops of each of red and blue food coloring.

Load more
Lemon and lavender combine to make sweet, summery cupcakes. They have a sweet lemon taste initially and finish with just a hint of the lavender. Although the frosting and cake both have lavender and lemon in them, the frosting tastes more lemony, and the cake tastes more like lavender. These cupcakes were easy to make, but the frosting was thick enough that it was difficult to work with. It did hold its shape very well, though, and a little extra milk to give it a creamier texture would be an easy fix. Lemon Lavender Cupcakes
Hungry PinnerPin, Cook, Eat, Review