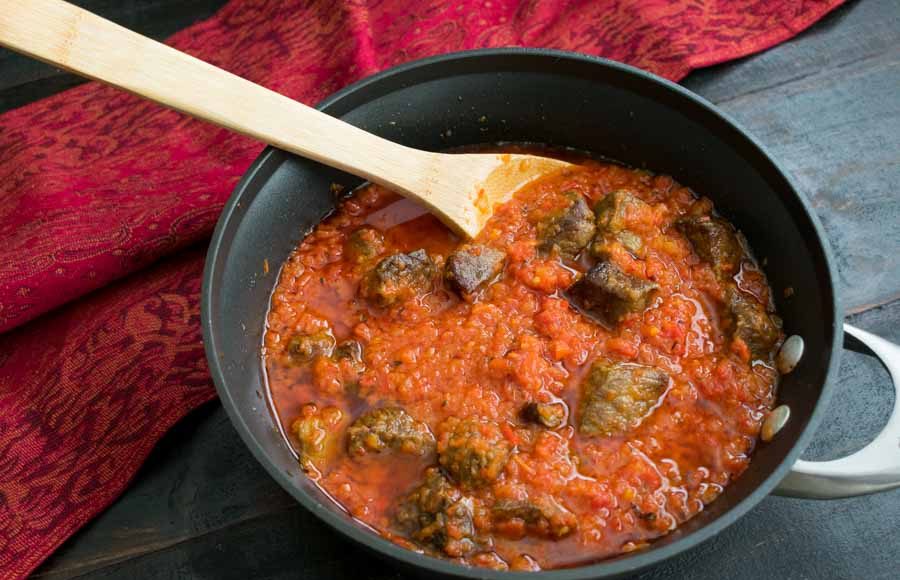 I’ve been wanting to make this Nigerian Beef Stew recipe for a while. Not only because it sounds delicious, but because it’s part of getting in touch with a missing part of my heritage. I lost my parents a few years ago and decided to take a DNA test not long after. The findings weren’t too surprising. English and German on Mom’s side and Swedish and West African on Dad’s side. There was a tiny bit of Portuguese, which I assumed was from Mom’s side based on family stories but could have been part of Dad’s since they were a major colonial force in West Africa.

Dad’s side was the most surprising–I never suspected Swedish. He was from the Bahamas, and West African was given due to the slave trade. Family records only went back a couple of generations before I hit a block, so this is the only way I have to connect to that part of my heritage. So this week is all about Nigerian cuisine, which is fitting because this is the time of year when I lost my Dad. But I don’t want it to be a sad time. My Dad was a charmer, and he always had a good joke and a kind word at the ready. And he loved his vittles, as he would say 🙂

Beef stew is a versatile tomato stew popularly eaten in Nigeria. This stew is not peculiar to Nigerians alone, it is popular in other parts of Africa as well. This is one stew recipe you want to add to your recipe tin. A versatile tomato stew that can be eaten with anything and everything.

Recipe Author: Ajoke at My Active Kitchen
Get the recipe

This stew might sound exotic, but it’s packed full of easy to find supermarket and pantry staples. I had to shop for everything but the spices, but nothing was unusually expensive.

I don’t do metric so well, but it was easy to convert 1 kilogram to pounds (it’s about 2 1/4 pounds). Sometimes I buy a chuck roast and cut it up for stew, but this time I chose to buy pre-cut beef stew meat. Some of the cubes were unusually large, but it wasn’t much work to cut them in half for consistency.

My only question was whether to use chicken or beef bouillon powder since it’s not specified. I went with beef, but I’m sure chicken would have been just as good.

Like the ingredients, the instructions left me with a question (or two). I had to go back and re-read the accompanying blog post to figure out how to make the pepper mix mentioned in Step 4. The post does include a link to it, but that recipe was a bit confusing too.

The stew recipe included some of the items mentioned in the pepper mix recipe, but not all of them. Also, the video with the pepper mix recipe showed the peppers (red bell peppers and scotch bonnet) being roasted, but the recipe didn’t mention it. Not to mention that I had already used the onion when I boiled the beef.

In the end, I roasted the peppers because I like roasted peppers (20 minutes at 350℉). I also grabbed another onion since the pepper mix called for one too. So my pepper sauce was roasted red bell peppers, roasted scotch bonnet peppers, an onion, and an undrained can of diced tomatoes blended in a food processor. I hope I got it right!

Boiling and frying the beef was pretty straightforward, and it took 30 minutes. I was able to do almost all of the remaining prep work while it simmered. Just over an hour later (1 hour 6 minutes, to be exact), I had the beautiful stew you see pictured. I served it with plain white rice, but I think a crusty bread would have been even better.

Load more
Nigerian Beef Stew (African Stew)This Nigerian Beef Stew recipe wasn't too difficult and we gobbled it up! It pairs fried beef with a tomato and roasted red pepper base, plus some heat from the scotch bonnet peppers. The addition of a few spices and a good amount of simmering added a depth of flavor that was unique and just plain delicious. How good? So good my husband ate the leftovers, and he rarely does that (it's a weird thing with him). I did have a few questions about the ingredients and instructions, but I think I figured it out in the end. Even if I got it wrong, I'm still making this recipe again--it's amazing!
Hungry PinnerPin, Cook, Eat, Review