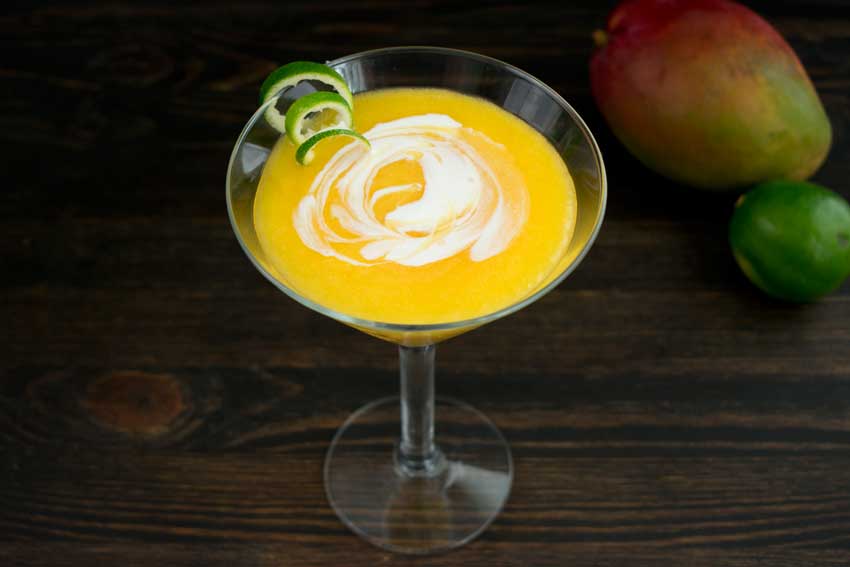 I had a few mangoes left over after the Crispy Jamaican Jerk Salmon with Mango-Basil Vinaigrette I made earlier this week, and I had to find a way to put them to use. The first thing that came to mind was the Mango Pudding recipe I tried last April. My husband has been bugging me to make it again, and this would be a perfect time. That took care of one mango–two more to go, so it was off to Pinterest to hunt for mango recipes I’ve pinned. A drink recipe seemed appropriate, and I had some coconut rum leftover from another recent recipe, Grilled Pineapple with Coconut Rum Sauce. It was serendipity!

There’s nothing quite like a refreshing tropical Mango Coconut Daiquiri made with fresh mango, coconut rum, and coconut cream on a hot summer day.

Recipe Author: Krissy Allori at Self Proclaimed Foodie
Get the recipe

Another recipe with only a few ingredients and I’m not mad about it! In addition to the mango and coconut rum, I had to buy a lime, heavy whipping cream, and a can of coconut milk. The recipe calls for a teaspoon of coconut cream, and I skimmed that off the top of the coconut milk and used the rest for another recipe.

This mango coconut daiquiri recipe had three main parts. Here is what they were and how long each took:

My total time for this recipe was 36 minutes which was far more than the 15 listed. I don’t think the time listed included macerating the mango, and I’m guessing that’s most of the discrepancy. I also made the coconut whipped cream while the mango was macerating, so that took four minutes off my time and would just account for the remaining discrepancy.

Anyway, back to making the recipe. First up was macerating the mango to soften the fruit and extract the juice. That meant coring and peeling a mango, but I have a few tricks to do this quickly. My mango corer and a small glass took care of what only looks like the hard part.

Once the mango was macerating I moved on to the whipped cream topping. I used my hand mixer, but I had some trouble getting it to whip up because there was so little. I had to double the recipe to make enough to whip. Problem solved, and I had extra sweet, coconut whipped cream. Total win-win!

Finally, it was time to make the mango coconut daiquiri. My trusty blender and a couple of martini glasses were all I needed. Once the cocktail was blended, I added a dollop of the coconut whipped cream to the center and used a teaspoon to swirl it a bit. I used my channel knife to make a lime twist since I forgot to buy berries to garnish as the recipe says to (in my defense they weren’t listed in the ingredients, just the final step).

Load more
This sweet and fruity rum cocktail has a touch of coconut and is perfect refreshment for the summertime. Making the actual cocktail doesn't take long, but you do need to plan ahead a bit as the mango has to soak in sugar and line juice for 30 minutes. Also, you might want to double up on the topping ingredients since it makes so little it's had to whip. Otherwise, the recipe isn't difficult to make, there are only a few ingredients, and they are easy to find. Mango Coconut Daiquiri
Hungry PinnerPin, Cook, Eat, Review