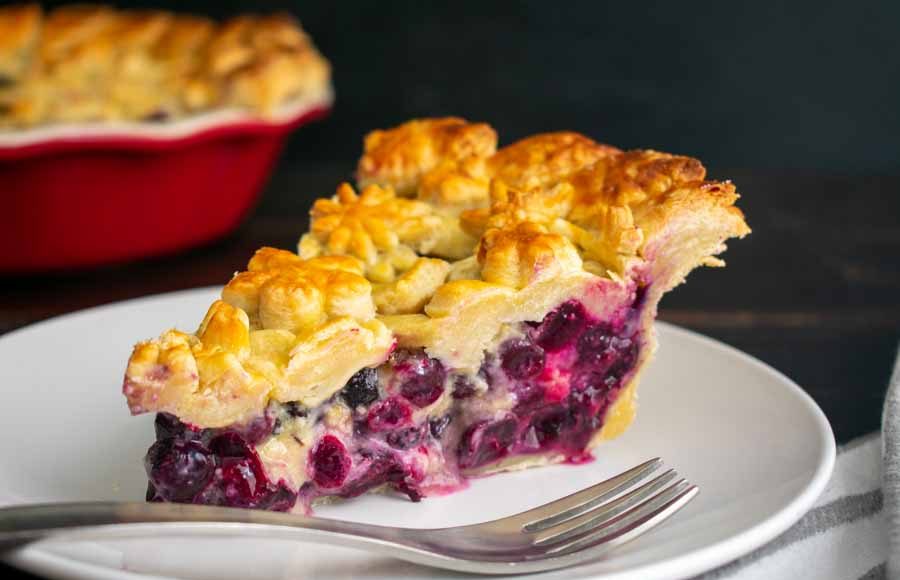 Happy Blueberry Pie Day!! Sadly, it’s not a paid day off, but it does involve a tasty treat. But I didn’t want to make a plain blueberry pie because it sounded boring. No, I had to be a little extra and find this Blueberry Lavender Honey Pie recipe. Then I decided a little extra wasn’t enough. No, I felt the need to be full-on extra, so I decided to try decorating my pie like those Instagram pie makers. So I scoured Pinterest for decorating ideas, ordered a set of cookie cutters, and stopped by the grocery store. I’m not the strongest baker, so let’s see what happens.

I was inspired by my daily breakfast of blueberries with Greek yogurt and honey for this recipe. This pie mixes plump blueberries with a hint of floral lavender, honey and a swirl of cream.

Recipe Author: Kylie Mazon-Chambers at Cooking with Cocktail Rings
Get the recipe

I was surprised to see the list of ingredients for this recipe was so short. But I’ve never made a blueberry pie before, and I’m sure I imagined it would be a lot more complex than it actually is.

Most of the ingredients were basics, and I didn’t have any trouble finding them. I was really unsure of how much blueberries to buy. A little research told me 1 pint of blueberries was about 2 cups, so I bought 3 pints. I ended up using 2 1/2 pints for this pie.

The only ingredient I couldn’t find at the grocery store was the culinary lavender. Fortunately, I still had some in my pantry. I had to grind it in my mini-prep, but that only took a couple of minutes.

As you can see from the photos, my blueberry pie decorating was successful. It took a while, but I’m pleased with the results. Here’s how my time broke down:

I have to say that making this pie went smoothly for the most part. The only things that didn’t go according to the instructions were making the dough and macerating the blueberries.

I’ve made pie dough before, so I knew it wasn’t coming together properly after I added the ice water. It just wouldn’t stick together and kept crumbling. I ended up adding another 4 tablespoons of ice water (for a total of 8 tablespoons) to get it to the right consistency. Then I split the dough in half and refrigerated overnight it in discs pressed between plastic wrap.

The next day I got started on the filling first. I wasn’t sure how aggressively to smash the blueberries, but I think I was too conservative. They were supposed to release juices during the hour they were macerating, but I didn’t notice any at the end of the hour. I was afraid that would make the filling too wet, but it turned out fine.

Rolling out the pie dough was a little tough at first because the dough was so cold. I should have taken it out of the refrigerator before I started the filling so it could warm up a little. The second half of the dough did warm up a little while I was making the bottom crust, and it was much easier to handle.

Then it was time to start decorating! I created a wide lattice to give the floral cutouts some support. Next, I used a set of cookie cutters to make the flowers, leaves, and butterflies for the top crust. A pastry brush to apply a beaten egg was all I needed to stick them down. It wasn’t difficult, but I took my time and designed it as I went.

Once it was all done, I started brushing on the eggwash. Then I realized I needed to take a photo and the eggwash was obscuring some of the detail. You can see a bit on the lower lefthand portion of the crust in the above photo. Sorry about that!

Forty minutes after the pie went into the oven, and I removed the lovely, golden Blueberry Lavender Honey Pie you see below. The pastry puffed a bit, distorting the design, but I think it’s pretty good for my first ever decorated pie. Definitely much prettier than just adding a crumble on top!

Load more
Blueberry Lavender Honey PieYes, Blueberry Lavender Honey Pie does have a lot going on, but it all works beautifully. The blueberry filling has a hint of lavender and lemon, is sweetened with honey, and baked in a flaky, buttery crust. The clear instructions were easy to follow, but I did have some trouble getting the dough to come together, but a little extra water easily fixed that problem. I ended up with plenty of dough to decorate the top of my pie, and a set of cookie cutters made it easy even though it was time-consuming. I'm glad I gave this recipe a try!
Hungry PinnerPin, Cook, Eat, Review