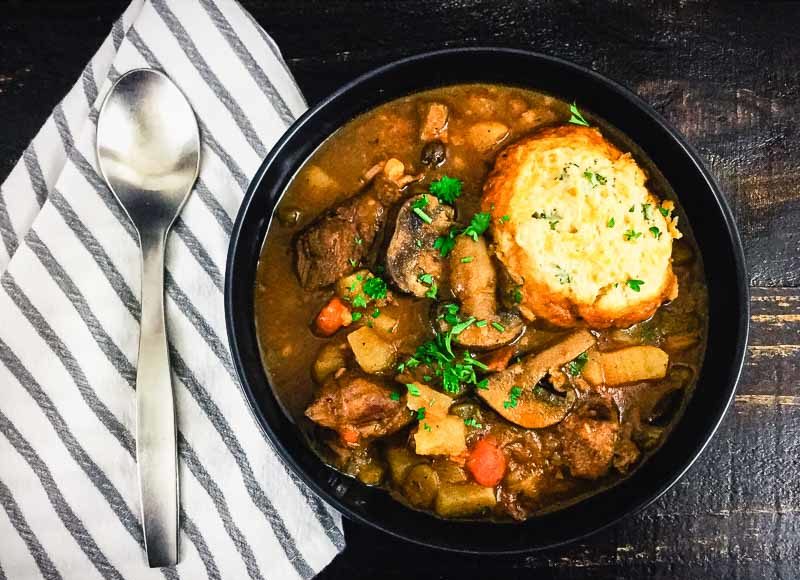 I don’t drink beer often, but when I do, I drink dark beers. Stout is a favorite, and Guinness is THE stout. I drink it year-round, but there is something about it that makes me think of cold weather. And since it’s January, the middle of winter, this recipe for a hearty beef stew using Guinness simply had to be made.

This is one of those go-to staple dishes that you’re going to crave whenever it gets cold, just like we do.

Recipe Author: Morgan at Host the Toast
Get the recipe

Nothing in this beef stew recipe was difficult to find, but there are quite a few ingredients. In fact, this is one of the longer lists I’ve blogged. Don’t let that intimidate you, though, because none of them are unusual or specialty items. You should be able to find everything you need in any supermarket.

I opted for a whole boneless chuck roast instead of buying precut “beef stew meat” for a couple of reasons. First was I don’t know what cut I was buying with the pre-cut stuff. It was literally labeled “beef stew meat”.

Second, I couldn’t find a 2-pound package, but I could with the whole roast. Finally, the chunks of precut meat are usually too large. I have to cut them down anyway to get a small enough piece in order to get a bite with vegetables too. Cutting up the roast only took a few minutes. I’ll be buying my stew meat this way from now on.

Oh, and cremini mushrooms aren’t something you’ll have to hunt down. It’s just another name for baby portabella or baby bella mushrooms. I’m sure you could substitute white button mushrooms or chopped portabella mushrooms if you had to, but baby bellas are pretty widely available these days. I was able to find them presliced for the same price as whole, which was a time saver.

So, this Guinness beef stew took a long time to make. The prep work was done in 20 minutes, and the total time was 3 hours 30 minutes. I’d say this is the kind of dish you would need to make on the weekend unless you are at home during the day.

There are a lot of vegetables to peel and chop for this recipe. I used a vegetable chopper I purchased many years ago, and it really sped things up. I also decided to peel the turnip and potatoes even though it wasn’t specified in the instructions. This was really a personal preference.

I used a 5.3 quart cast iron casserole dish, and it was just the right size. I did have to brown the stew meat in 2 batches, though, or it would have been overcrowded in the pan.

There were a few questions that came up as I was making this dish. One was whether the stew needed to be covered or uncovered during step 7. I went with uncovered so the broth would thicken. The other was when to add the herbs to the dumplings. They’re listed in the ingredients but not mentioned in the instructions. I added them when I added the shredded cheese.

Load more
Guinness Beef Stew with Cheddar Herb DumplingsThis beef stew recipe is going to become a favorite for cold weather months. It's rich, hearty and true comfort food. The meat and vegetables were tender without falling apart, and the Guinness and herbs gave the broth such a rich flavor. The dumplings were a little more biscuit like than I'm used to, but the cheese and herbs gave them a little zing. My husband absolutely loved the stew and dumplings. I was pretty pleased with it, but I think I'll omit the turnip next time (this was my first time trying it). The taste was fairly mild, but I think the stew will be a 5 without it.
Hungry PinnerPin, Cook, Eat, Review