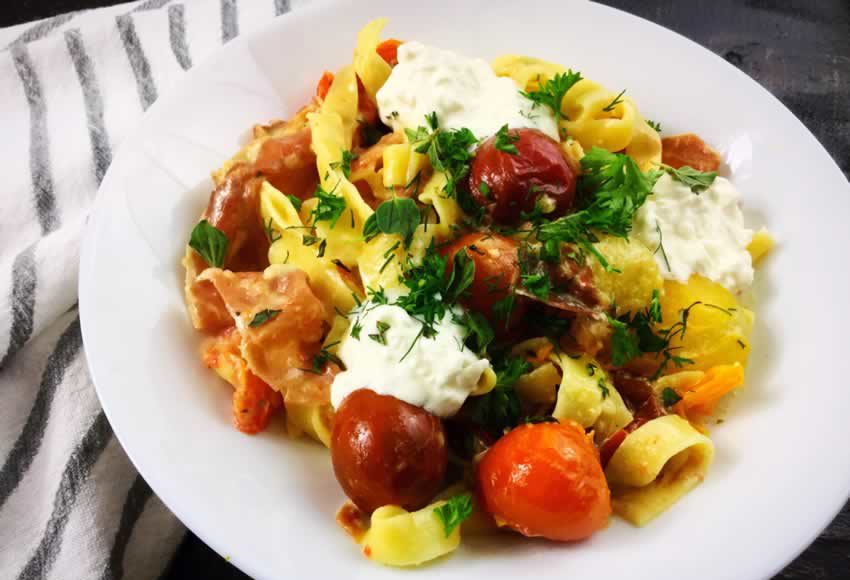 I love carbonara. Pasta, cheese, and bacon in a creamy sauce. How good does that sound? This recipe caught my eye because the super long title has all kinds of things I love as well as a new one: burrata. I’ve seen burrata cheese all over Pinterest and had no idea what it was. But it looks like a creamy cheese, so odds are it’s delicious. Let’s hope because it’s on the menu this week!

I know that carbonara is typically all about the parmesan, but hey, isn’t two cheeses always better than just one? I think so. And it’s burrata, which you can just never go wrong with because it works with basically every food out there.

Recipe Author: Tieghan at Half Baked Harvest
Get the recipe

My local Publix had everything I needed for this recipe, but this isn’t a cheap meal. I had the olive oil, salt, and pepper on hand. The remaining ingredients were just over $43. Nope, that’s not a typo. The priciest items were the burrata at $10.99, the tomatoes at $7.98, and the prosciutto at $5.99. Here’s how the costs broke down:

I did get 5 meals out of this recipe, though, at a cost of $8.60 each. Not too bad considering what it would have cost at a restaurant. I also had leftovers of all the ingredients except the prosciutto, tagliatelle, and tomatoes. (The egg, herbs, and burrata sure made a delicious omelet!)

The burrata might just have been my favorite part of this recipe. I was beyond delighted when I read the label and found out exactly what it is. If you don’t know, it’s fresh mozzarella balls that encase a mixture of unpulled (creamy) mozzarella mixed with cream. Trust me, it tastes even better than it sounds. Bonus for the fact that you can tear apart the outer casing after you squeeze out the creamy filling and add both to your meal.

My carbonara took a total of 35 minutes. Prep time was as listed, 10 minutes, but the tomatoes took longer than the 15 minutes listed. I roasted them in a Pyrex baking dish placed on the middle rack of my oven. They had not collapsed after 10 minutes, so I kept adding 5-minute intervals. The skins were splitting, and a few had started to collapse at the 25 minutes mark, and I decided that was done enough.

They didn’t look like the author’s photos, but the pasta and sauce had been ready for a while so I called it. Next time (and there will be a next time for this recipe) I’ll try a metal pan and maybe a lower position for the shelf. I have a feeling the pyrex was really the issue.

Otherwise, the recipe was very easy to follow, and I had no trouble at all making it. The only mystery was what to do with the crushed red pepper flakes. The ingredients list a pinch of them, but the instructions left them out. I ended up skipping them, but I’m going to guess they were to be added as a topping along with the chopped herbs.

Load more
Just when I thought carbonara couldn't possibly get any better... Was I wrong! This recipe is such a delicious twist on a classic. The first taste and smell I noticed was the garlic, followed by the creamy, cheesy sauce and fresh herbs. Each bite includes those flavors and may or may not add the salty prosciutto and tart tomatoes. My husband and I both raved about this dish long after it was gone. It's another that simply must be added to my favorites list.Garlic and Herb Roasted Cherry Tomato Carbonara with Crispy Prosciutto and Burrata
Hungry PinnerPin, Cook, Eat, Review