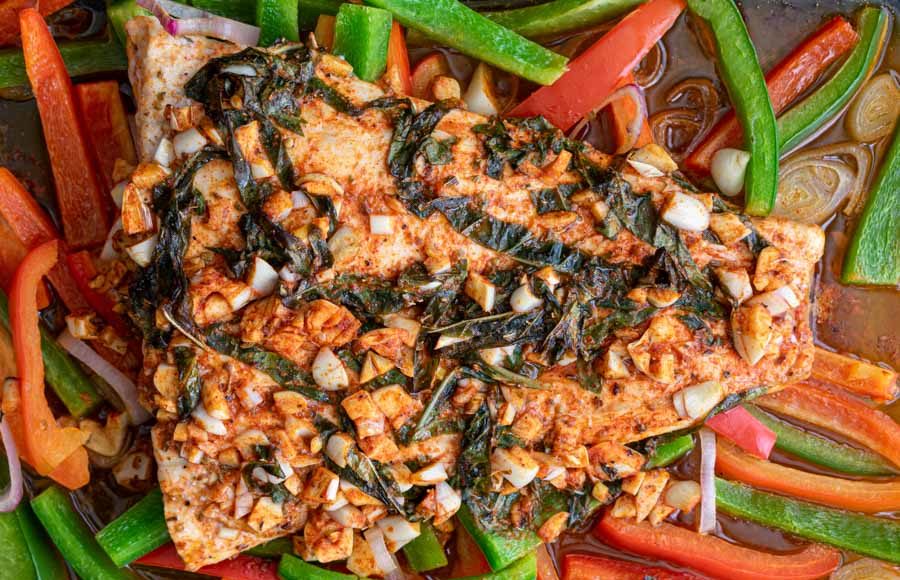 I love fish, but I don’t get it very often because I’m usually cooking for two. Mr. Pinner isn’t a fan, and tuna (in almost any form) and fish and chips are the only ways he likes fish. But there are ties when I cook just for myself, and today is one of those days. I’ve been craving seafood when this Easy Baked Fish with Garlic and Basil popped up on my radar. I also adore Mediterranean food, so this sounds like the perfect pairing. Let’s find out if this recipe will satisfy my seafood craving.

Easy, tender baked fish infused with garlic and basil. The secret to this juicy fish is in the quick fish marinade with a few spices, garlic, fresh basil, a little citrus and extra virgin olive oil.

Recipe Author: Suzy at The Mediterranean Dish
Get the recipe

One of the things I liked about this recipe was that the type of fish was a little flexible. That makes it easy to customize to your personal taste and the availability of fish in your area. The author suggests halibut, and I was able to find a beautiful .9-pound fillet for $17.99.

The rest of the ingredients were either pantry staples I had on hand or produce that was easy to find. In fact, I even found peeled shallots. I had no idea you could get them already peeled, and I love it—I can see what I’m getting through the clear plastic packaging.

I’ve had some bad experiences with shallots, and I’ve bought plenty of that looked good but were black and moldy underneath the peel (I always buy an extra or two because of this). I think the reason is they often sit on store shelves for a while. The ends of these were a little dry, but they were easy to trim off.

This recipe was so easy to make, and that’s fortunate because it has “easy” in the title! There is some slicing and mincing involved, but I find it therapeutic. Here’s how my time was spent:

That’s right in line with the times listed on the recipe. I also want to add that I prepped the bell peppers and shallots while the fish was marinating. That took six minutes.

Also, I don’t think I sliced the bell peppers correctly. I didn’t look closely at the photo as I was cooking, so I chose long thin strips. I noticed afterward that the recipe shows horizontal slices that are more like rounds. The rounds are prettier, but I’m sure it makes no difference as far as taste.

One thing I noticed about this recipe that was a little unusual was that the marinade isn’t discarded. Instead, you place the fish into a baking dish and pour the marinade over it. I’m so used to recipes saying to discard the marinade. But I liked keeping the marinade and all the garlic, basil, and other flavors in it.

Another somewhat interesting thing I noticed was that this dish looks almost the same going into the oven as coming out. I had to really look at it to pick out the differences. The cooked basil does turn brown/black, and there is more liquid in the bottom of the baking dish.

You really have to test the fish’s doneness by flaking it with a fork or using a meat thermometer. However, I find the meat thermometer difficult with think cuts like fish fillets.

A Note About Garlic

Finally, I wanted to mention that I chose to leave the garlic in somewhat larger chunks than a mince this recipe called for. The larger chunks didn’t cook completely, and that gave me plenty of raw garlic flavor and spice. If you aren’t as into it, mincing or pressing it into finer pieces that cook more will mellow the flavor somewhat.

Load more
Easy Baked Fish with Garlic and BasilThis Easy Baked Fish with Garlic and Basil was exactly that, easy with plenty of garlic and basil flavor. I loved it! The halibut was moist and flaky, and the bell peppers were tender-crispy. But the main feature of this recipe was the garlic. With 10 cloves of garlic, garlic lovers will be in heaven with this recipe. But don't despair, the garlic doesn't drown out the rest of the lemon, basil, and paprika flavors. Instead, they all meld beautifully! With only a few ingredients and steps, this recipe is easy to make too. I had it done in about an hour including time to marinate the fish fillet. What' better is most of that time is inactive, with just a bit of slicing and dicing to be done. Perfect for weeknights!
Hungry PinnerPin, Cook, Eat, Review