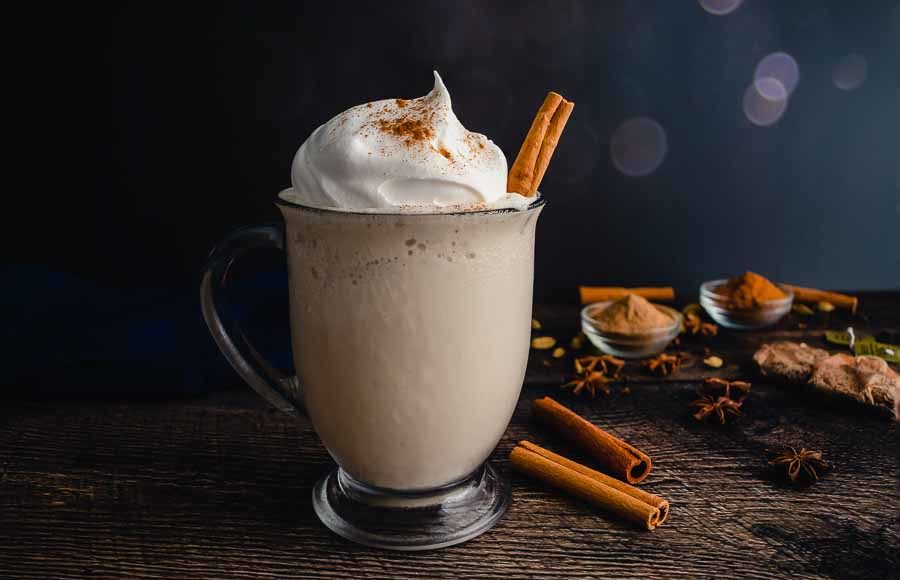 Can you tell I planned my blog menu waaay too far in advance? I had no idea this winter would be so cold when I decided to make this Chai Frappuccino, but I decided to forge ahead anyway. Mainly because I had most everything on hand, and I just plain need to save a few bucks this year. Never mind that it is going to get in the 40s for the next few nights here in “sub-tropical” South Florida. I don’t know how those in colder climates are handling it! But here is a delicious drink in case you can’t quite get that heat setting quite right and it’s just a touch too warm inside right now. Or if you are just dreaming of a warm summer day like I am 🙂

A copycat recipe of a Starbucks chai Frappuccino made with just a few simple ingredients! So easy and delicious!

Recipe Author: Madi at Snacks and Sips
Get the recipe

As I mentioned, I had all of the ingredients for this Chai Frappuccino on hand, and that doesn’t happen very often. Ice and water are a given, but I happened to have extra whipped cream from the Pumpkin French Toast Casserole I posted last week. I also keep cinnamon on hand at all times as well as a selection of teas including chai.

This frappuccino was so simple to make, and the recipe breaks down into two main parts: brewing the tea and blending the drink. Mine took just a bit more than the 25 minutes listed. Here’s how my time was spent:

I kicked things off by brewing the tea and decided to skip the stove and boiled the water in my microwave. I was sure to watch, and 90 seconds had it at a rolling boil. Then I poured the water over the tea bags and let them brew for 10 minutes. Afterward, I removed the tea bags and placed the chai tea into my refrigerator. Tip: I put the tea container on top of a frozen gel ice pack to cool it faster.

Next, I added the chai tea, ice, and three generous scoops of vanilla ice cream to my blender and blended until smooth. Then I poured it into a mug and topped it with a spoonful of whipped cream and a sprinkle of cinnamon. I even threw in a long cinnamon stick to make it a little extra.

The recipe does say this makes two servings, but I used very large mugs. They hold 16 ounces, and I was only able to fill one. You’ll need to use much smaller mugs to get two 8-ounce servings.

Load more
This Chai Frappuccino was a lightly spiced creamy vanilla treat. The ingredients were easy to find, and I had no trouble at all following the instructions. All you need in the way of special equipment is a blender, and you will be on your way to this chai-flavored dessert in a glass. Or should I say mug? LOL!Chai Frappuccino
Hungry PinnerPin, Cook, Eat, Review